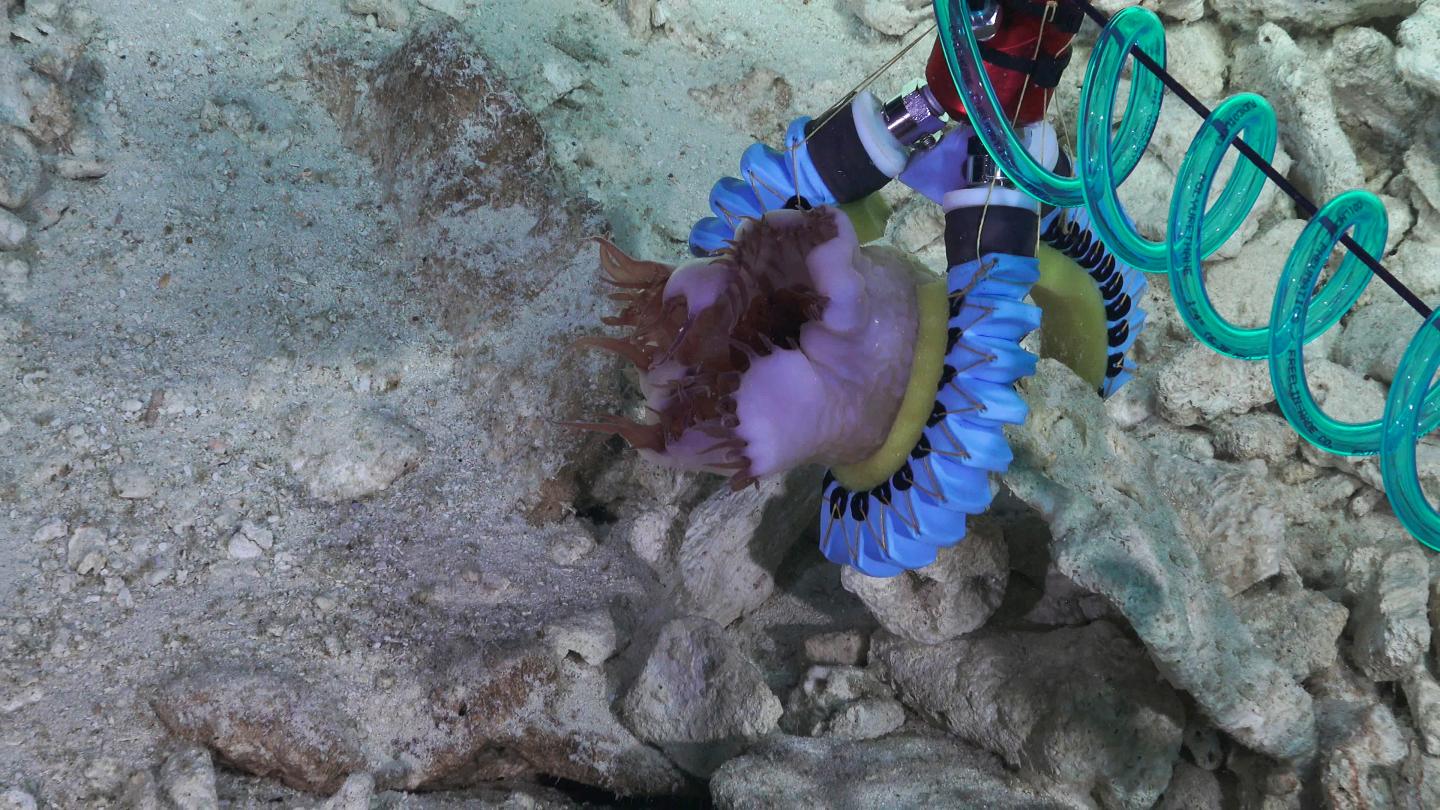 A three-finger soft manipulator grasping a sea anemone attached to a rock on a hard substrate. Credit: Schmidt Ocean Institute

While the cold and airless deep sea is inhabitable for humans, it is filled with delicate organisms that thrive in its harsh environment. Studying those organisms requires specialized equipment mounted on a remotely operated vehicle (ROV); any other type of equipment could literally crack under pressure. A multidisciplinary group of engineers, marine biologists, and roboticists have developed a sampling device that is soft, flexible, and customizable, which allows scientists to gently collect different types of organisms from the sea without harming them. It also allows 3D-print modifications to the device overnight without the need to return to a land-based laboratory. An upcoming paper in PLOS One takes a deeper dive into this research.

The “soft gripper” devices that the team designed have two to five “fingers” made of polyurethane and other squishy materials that open and close via a low-pressure hydraulic pump system that uses seawater to drive their movement. “Many of the animals we encounter in the deep-sea are new species and these soft robots allow us to delicately interact and study a more diverse suite of fauna,” said co-author David Gruber, Presidential Professor of Biology and Environmental Science at the City University of New York’s Baruch College. The grippers are attached to a wooden ball that is held and manipulated using an ROV’s, hard claw-like tools, controlled by a human operator on the ship to which the ROV is tethered.

The team put the latest version of their soft grippers to the test on a voyage aboard R/V Falkor in the remote Phoenix Islands Protected Area in the South Pacific. Being in such an isolated environment meant that obtaining new parts for the grippers would be nearly impossible, so they brought two 3D printers for creating new components on-the-fly. “By 3D printing at sea, we can innovate, on-the-fly, and come up with soft robotics to interact with soft and delicate animals that were previously unexamined – as they were too fragile,” said Gruber, who is also a 2017-2018 Radcliffe Fellow and National Geographic Explorer.

“Being on a ship for a month meant that we had to be able to make anything we needed, and it turns out that the 3D printers worked really well for doing that on the boat. We had them running almost 24/7, and we were able to take feedback from the ROV operators about their experience using the soft grippers and make new versions overnight to address any problems,” said Daniel Vogt, a Research Engineer at the Wyss Institute.

The soft grippers were able to collect sea slugs, corals, sponges, and other marine life much more effectively and with less damage than traditional underwater sampling tools. Based on input from the ROV operators, the team 3D-printed “fingernail” extensions that could be added to the gripper’s fingers to help them get underneath samples that were sitting on hard surfaces. A flexible mesh was also added to each finger to help keep samples contained within the fingers’ grip. Another, two-fingered version of the grippers was also created based on ROV pilots’ familiarity with controlling existing two-fingered graspers, and their request that the two fingers be able to hold samples with both a “pinch” grasp (for small objects) and a “power” grasp (for large objects).

The team is in the process of further developing the grippers, hoping to add sensors that can indicate to the ROV operator when the grippers come into contact with an organism, “feel” how hard or soft it is, and take other measurements. Ultimately, their goal is to be able to capture sea creatures in the deep ocean and obtain full physical and genetic data without taking them out of their native habitats.