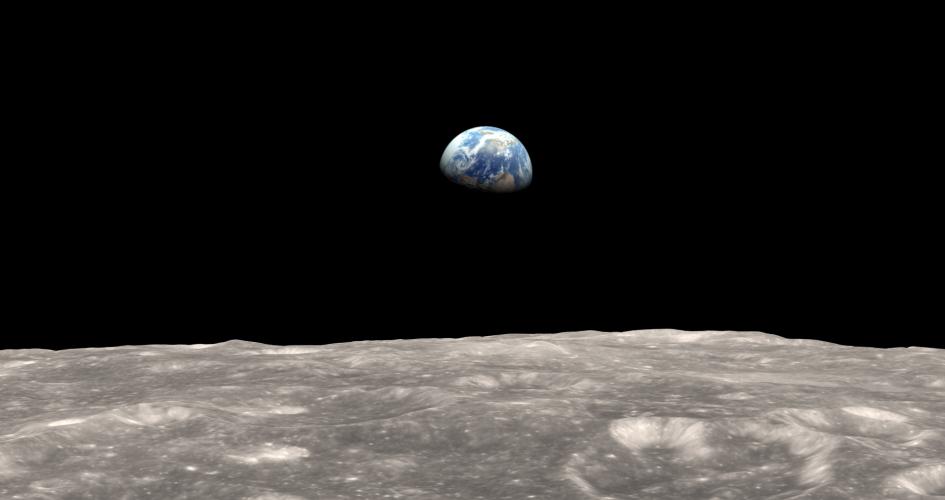 Caption: A new study has rejected some of the popular theories on the formation of the Earth and the moon. Credit: NASA

A new study has shed light on where the materials that comprise the Earth and the moon originated.

The majority of scientific models contend that the Earth formed gradually by addition from an assortment of moon-to-Mars-sized masses that had a variety of isotopic characteristics.

Nicholas Dauphas, the Louis Block Professor in Geophysical Sciences at the University of Chicago, said in a new study that the Earth and the moon and certain meteorites, were formed from materials that were more similar, holding almost indistinguishable isotopic characteristics.

“The Earth accreted from an isotopically homogenous reservoir,” Dauphas said in a statement. “In terms of colors, you could say that it was not ‘green, blue, red,’ but rather ‘green, green, green’.”

Dauphas analyzed the data of certain elements to decipher the isotopic nature of the material that is believed to have formed the Earth.

The researcher found anomalies in the elements, which provided “fingerprints” to recreate the formation process and helped to establish “genetic ties” between planetary bodies and their building blocks.

Dauphas used the isotopic similarities found in select elements to record the stages of the Earth’s formation.

When the Earth was formed 4.5 billion years ago and as its core grew, the core is believed to have attracted elements that had strong affinities for metal. As core formation was nearly complete, such elements were left to reside in the mantle.

This helps explain the age of the parts of the Earth and the role they played in forming the planet, according to Dauphas.

“For example, I can tell you that the coin in your pocket with the image of Jefferson on it contains no nickel from the first 60 percent of the Earth’s accretion because the core scavenged that early-to-arrive nickel,” Dauphas said.

“Before this work, the question of the nature of the Earth’s accreting material through time was mostly rhetorical,” Dauphas said. “By studying high-precision measurements, we have shown that the Earth, the moon and meteorites with a high concentration of the mineral enstatite have almost indistinguishable isotopic compositions.”

“The moon is isotopically similar to the Earth,” Dauphas said. “Therefore the giant impactor that struck the Earth soon after it was created, thereby forming the moon, most likely had a similar isotopic composition to the Earth.”