UCLA scientists and engineers have developed a new process for assembling semiconductor devices. The advance could lead to much more energy-efficient transistors for electronics and computer chips, diodes for solar cells and light-emitting diodes, and other semiconductor-based devices.

A paper about the research was published in Nature. The study was led by Xiangfeng Duan, professor of chemistry and biochemistry in the UCLA College, and Yu Huang, professor of materials science and engineering at the UCLA Samueli School of Engineering. The lead author is Yuan Liu, a UCLA postdoctoral fellow.

One issue with that process is that the metal atoms are usually different sizes or shapes from the atoms in the semiconductor materials that they’re bonding to. As a result, the layers cannot form perfect one-to-one atomic connections, which is why small gaps or defects occur.

“It is like trying to fit one layer of Lego brand blocks onto those of a competitor brand,” Huang says. “You can force the two different blocks together, but the fit will not be perfect. With semiconductors, those imperfect chemical bonds lead to gaps where the two layers join, and those gaps could extend as defects beyond the interface and into the materials.”

Those defects trap electrons traveling across them, and the electrons need extra energy to get through those spots. 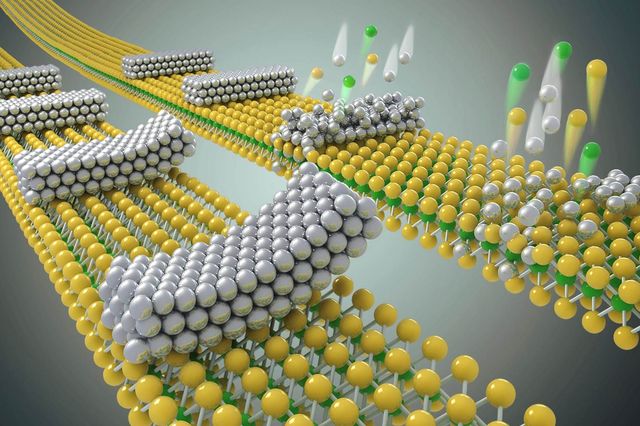 The UCLA method prevents the defects from forming, by joining a thin sheet of metal atop the semiconductor layer through a simple lamination process. And instead of using chemical bonds to hold the two components together, the new procedure uses van der Waals forces — weak electrostatic connections that are activated when atoms are very close to each other — to keep the molecules “attached” to each other. Van der Waals forces are weaker than chemical bonds, but they’re strong enough to hold the materials together because of how thin they are — each layer is around 10 nanometers thick or less.

(A nanometer is one-billionth of a meter; for comparison, a human hair is about 100,000 nanometers thick.)

“Even though they are different in their geometry, the two layers join without defects and stay in place due to the van der Waals forces,” Huang says.

The research is also the first work to validate a scientific theory that originated in the 1930s. The Schottky-Mott rule proposed the minimum amount of energy electrons need to travel between metal and a semiconductor under ideal conditions.

Using the theory, engineers should be able to select the metal that allows electrons to move across the junction between metal and semiconductor with the smallest amount of energy. But because of those tiny defects that have always occurred during manufacturing, semiconductor devices have always needed electrons with more energy than the theoretical minimum.

The UCLA team is the first to verify the theory in experiments with different combinations of metals and semiconductors. Because the electrons didn’t have to overcome the usual defects, they were able to travel with the minimum amount of energy predicted by the Schottky-Mott rule.

“Our study for the first time validates these fundamental limits of metal-semiconductor interfaces,” Duan says. “It shows a new way to integrate metals onto other surfaces without introducing defects. Broadly, this can be applied to the fabrication of any delicate material with interfaces that were previously plagued by defects.”

For example, besides electrode contacts on semiconductors, it could be used to assemble ultra–energy-efficient nanoscale electronic components, or optoelectronic devices such as solar cells.