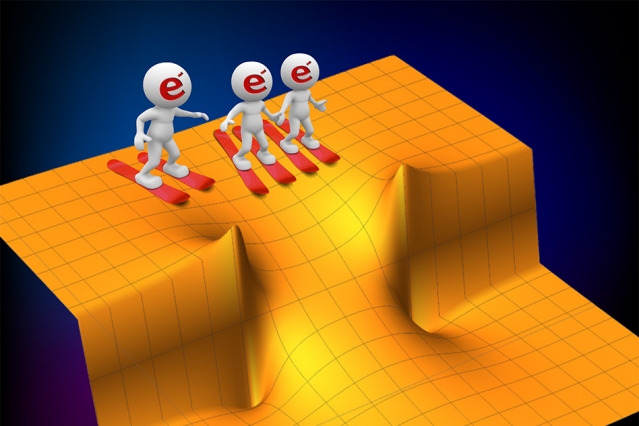 New research shows that electrons passing through a narrow constriction in a piece of metal can move much faster than expected, and that they move faster if there are more of them — a seemingly paradoxical result. In this illustration, the orange surface represents the potential energy needed to get an electron moving, and the “valley” at center represents the constricted portion. Image: Genia Brodsky, Graphic Designer/Weizmann Institute of Science

A new finding by physicists at MIT and in Israel shows that under certain specialized conditions, electrons can speed through a narrow opening in a piece of metal more easily than traditional theory says is possible.

This “superballistic” flow resembles the behavior of gases flowing through a constricted opening, however it takes place in a quantum-mechanical electron fluid, says MIT physics professor Leonid Levitov, who is the senior author of a paper describing the finding that appears this week in the Proceedings of the National Academy of Sciences.

The behavior seems paradoxical. It’s as though a mob of people trying to squeeze through a doorway all at once find that they can get through faster than one person going through alone and unobstructed. But scientists have known for nearly a century that this is exactly what happens with gases passing through a tiny opening, and the behavior can be explained through simple, basic physics, Levitov says.

In a passageway of a given size, if there are few gas molecules, they can travel unimpeded in straight lines. This means if they are moving at random, most of them will quickly hit the wall and bounce off, losing some of their energy to the wall in the process and thus slowing down every time they hit. But with a bigger batch of molecules, most of them will bump into other molecules more often than they will hit the walls. Collisions with other molecules are “lossless,” since the total energy of the two particles that collide is preserved, and no overall slowdown occurs. “Molecules in a gas can achieve through ‘cooperation’ what they cannot accomplish individually,” he says.

As the density of molecules in a passageway goes up, he explains, “You reach a point where the hydrodynamic pressure you need to push the gas through goes down, even though the particle density goes up.” In short, strange as it might seem, the crowding makes the molecules speed up.

A similar phenomenon, the researchers now report, governs the behavior of electrons when they are hurtling through a narrow piece of metal, where they move in a fluid-like flow.

The result is that, through a sufficiently narrow, point-like constriction in a metal, electrons can flow at a rate that exceeds what had been considered a fundamental limit, known as Landauer’s ballistic limit. Because of this, the team has dubbed the new effect “superballistic” flow. This represents a great drop in the electrical resistance of the metal — though it is much less of a drop than what would be required to produce the zero resistance in superconducting metals. However, unlike superconductivity, which requires extremely low temperatures, the new phenomenon may take place even at room temperature and thus may be far easier to implement for applications in electronic devices.

In fact, the phenomenon actually increases as the temperature rises. In contrast to superconductivity, Levitov says, superballistic flow “is assisted by temperature, rather than hindered by it.”

Through this mechanism, Levitov says, “we can overcome this boundary that everyone thought was a fundamental limit on how high the conductance could be. We’ve shown that one can do better than that.”

He says that though this particular paper is purely theoretical, other teams have already proved its basic predictions experimentally. While the speedup observed in flowing gases in the analogous case can achieve a tenfold or greater speedup, it remains to be seen whether improvements of that magnitude can be achieved for electrical conductance. But even modest reductions in resistance in some electronic circuits could be a significant improvement, he says.

“This work is careful, elegant, and surprising — all the hallmarks of very high-quality research,” says David Goldhaber-Gordon, a professor of physics at Stanford University who was not involved in this research. “In science, I feel phenomena that confound our intuitions are always useful in stretching our sense of what is possible. Here, the idea that more electrons can fit through an aperture if the electrons deflect each other rather than traveling freely and independently is quite counterintuitive, in fact the opposite of what we're used to. It's especially intriguing that Levitov and co-workers find that the conductance in such systems follows such a simple rule.”

While this work was theoretical, Goldhaber-Gordon adds, “Testing Levitov's simple and striking predictions experimentally will be really exciting and plausible to achieve in graphene. … Researchers have imagined building new types of electronic switches based on ballistic electron flow. Levitov's theoretical insights, if validated experimentally, would be highly relevant to this idea: Superballistic flow could allow these switches to perform better than expected (or could show that they won't work as hoped).”

Haoyu Guo, the paper’s lead author, is a junior who had just arrived at MIT as a second-year transfer student from Peking University when he started the work on this project — an unusual level of achievement for an undergraduate, especially one who had just arrived on campus, Levitov says. Guo worked on the project in part through MIT’s Undergraduate Research Opportunities Program, or UROP.

The team also included Ekin Ilseven at MIT and Gregory Falkovich, a professor of physics at the Weizmann Institute in Rehovot, Israel.