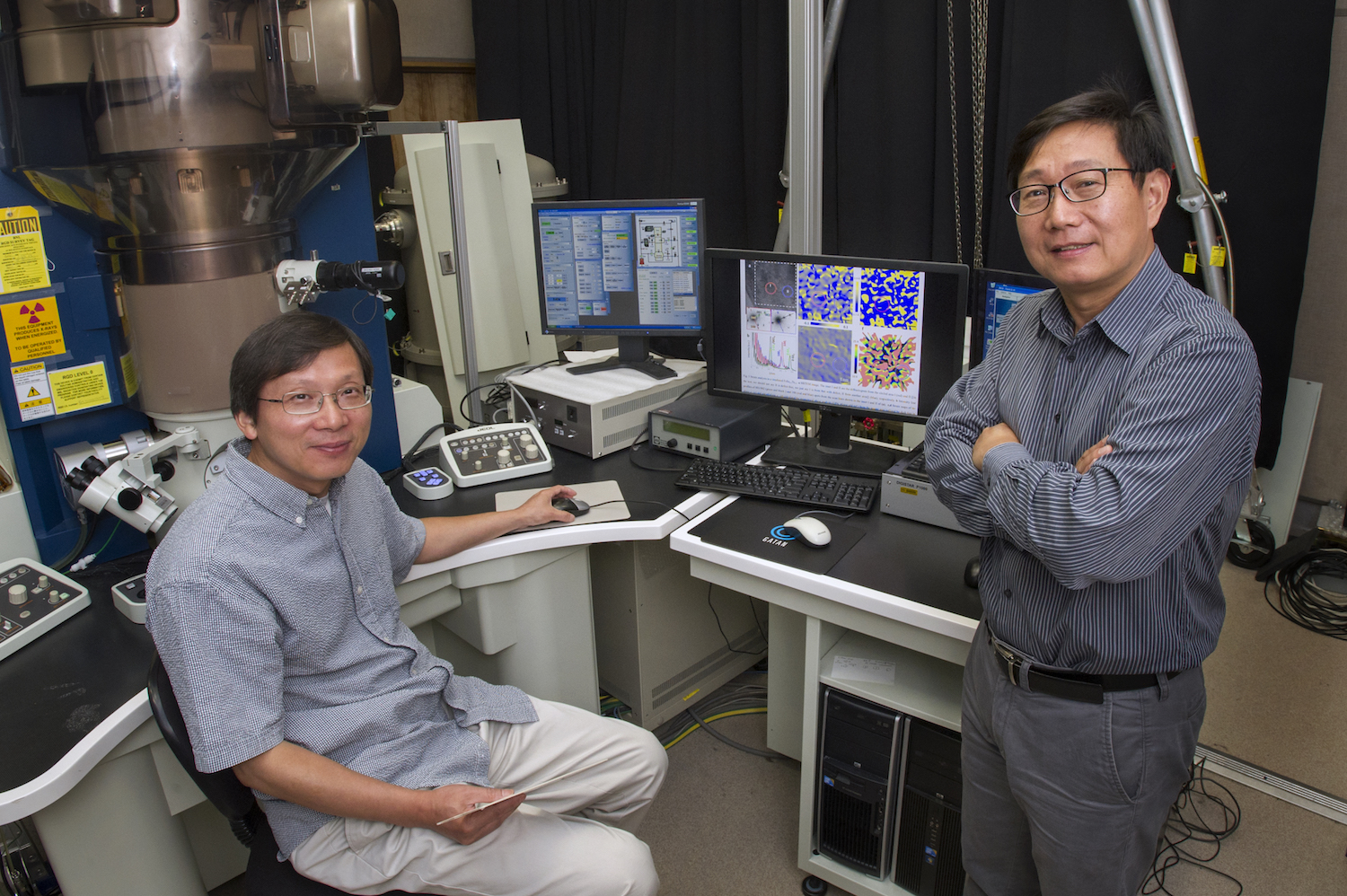 Brookhaven physicist Qiang Li (right) and materials scientist Lijun Wu in an electron microscopy lab in the Condensed Matter Physics and Materials Science Department at Brookhaven Lab. Li and his team used electron microscopes to examine the microstructural defects that appeared in an iron-based superconducting material after the material was bombarded with low-energy protons. These defects caused the lattice to locally compress or stretch out, as seen in the colored strain “maps” on the computer screen. Their analysis unraveled the structural origin of the simultaneous enhancement of two superconducting properties of the iron-based superconductor: the temperature at which the material becomes able to conduct electrical current with no energy loss and the amount of current the material can carry without losing this ability. CREDIT Brookhaven National Laboratory

Iron-based superconductors can conduct electricity without resistance at unusually high temperatures relative to those of conventional superconductors, which must be chilled to near absolute zero (minus 459 degrees Fahrenheit) to release their superconducting powers. In addition, they’re relatively easy to bend and can carry electrical current easily in different directions under high magnetic fields before superconductivity becomes suppressed. These characteristics make iron-based superconductors promising for advanced energy applications, from electric vehicles to wind turbines and medical imaging devices. However, the amount of current they can carry has been low in comparison to other superconductors. Scientists have been trying to increase this amount, but doing so has often come at the cost of degrading another key superconducting property–the critical temperature at which superconductivity emerges.

Now, a team of scientists has come up with a way to double the amount of electrical current an iron-based material can carry without losing its superconducting properties, while increasing the material’s critical temperature. Their method, reported in a paper published today in Nature Communications, makes use of a readily available technology that could be used to improve the performance of superconducting wires and tapes.

“By bombarding the material with protons at low energy, we simultaneously increased the material’s current-carrying capacity and critical temperature–the first time that this has been possible in an iron-based superconductor,” said physicist Qiang Li, head of the Advanced Energy Materials Group at the U.S. Department of Energy’s (DOE) Brookhaven National Laboratory, who directed the research. “There are low-energy ion facilities all over the world that can do this inexpensively.”

Shooting ions at superconducting materials is a well-established method for artificially introducing defects in the crystal structure or chemistry of the materials to increase the amount of current they can carry. These defects “pin” in place, or trap, the microscopic magnetic vortices that form when the superconductor is placed in a strong magnetic field, such as those generated by magnets in magnetic resonance imaging (MRI) machines. If free to move around, the vortices dissipate energy, thereby destroying the superconductor’s ability to carry electrical current without energy loss.

In a Goldilocks sense, the defects must be “just right”–not too big, not too small. Scientists can design such defects by selecting the appropriate ion species (e.g., protons, gold ions, argon ions) and ion energy.

“Some ions or energies may cause large enough damage to interfere with superconductivity, while others may not produce any effect at all,” explained coauthor Toshinori Ozaki, a former scientist in Brookhaven Lab’s Advanced Energy Materials Group who is now a faculty member at Japan’s Kwansei Gakuin University. “So we run simulations to figure out what combination should produce the optimal defect–one that can hold down the magnetic vortices without negatively impacting the material’s superconducting properties.”

“Throughout the irradiated films, we saw individual chains of defects created by the collisions between the incident ions and nucleus that broke the perfect atomic order, causing the lattice to locally compress or stretch out,” said coauthor Lijun Wu, a materials scientist at Brookhaven who led the microscopy work.

In a performance check, the scientists measured the amount of electrical current running through the films in low and high magnetic fields. In high fields, the irradiated films carried more current than any low-temperature superconductor. This result suggests that the defects and local lattice strain must be strongly pinning the magnetic vortices that would otherwise impede the flow of current.

According to Li, these performance gains are only the beginning: “We believe that the critical current and temperature can be further enhanced by fine tuning the structure of the defects and the arrangement of the lattice strains.”