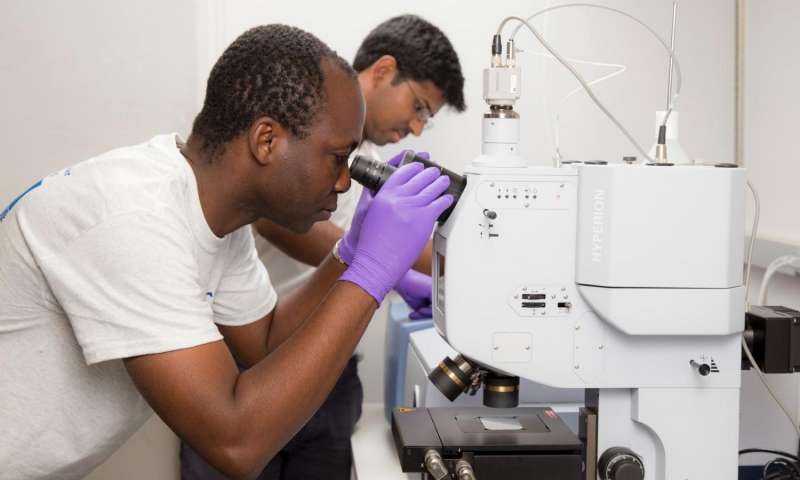 Researchers from the University of California San Diego have developed a novel design for a compact, ultra-sensitive nanosensor that can be used to make portable health-monitoring devices and to detect minute quantities of toxins and explosives for security applications.

The study addresses one of the major challenges of nanosensor design: how to increase sensitivity while reducing size.

The nanosensor design presented in this study combines three-dimensional plasmonic nanoparticles with singularities called exceptional points—a combination that’s being demonstrated for the first time. “The new physics implemented here could potentially outcompete the plasmonic technologies currently in use for sensing,” said Boubacar Kanté, electrical engineering professor at the UC San Diego Jacobs School of Engineering and senior author of the study. Kanté and his team published their novel design Nov. 8 online in the rapid communication section of the journal Physical Review B.

Singularities, such as exceptional points, are fundamental in physics due to their uncanny ability to induce a large response from a small excitation, Kanté explained. Singularities occur when a quantity is undefined or infinite, such as the density at the center of black hole, for example. Exceptional points occur when two waves become degenerate, meaning that both their resonant frequencies and spatial structure merge as one.

“Exceptional points have been highly sought after for sensors and enhanced light-matter interactions,” said Ashok Kodigala, a PhD student in Kanté’s lab and first author of the study. “The possibility to demonstrate exceptional points in systems that are simultaneously sub-wavelength and compatible with small biological molecules for sensing has remained elusive—until now.”

Nanosensors operate based on a phenomenon called frequency splitting, meaning that the presence of a substance perturbs the degeneracy between two resonant frequencies and causes a detectable split. In an exceptional-point-based nanosensor, resonant frequencies would split much faster than they do in traditional nanosensors, giving rise to enhanced detection capabilities.

By combining exceptional points and plasmonics, researchers formulated a design for a nanosensor that is both compact and ultra-sensitive.

“We believed that designing such a nanosensor requires not just a gradual improvement of existing devices, but a conceptual breakthrough. That is why we chose to focus on exceptional-point-based-nanosensors,” Kodigala said.

In this study, researchers proposed what Kodigala calls “a general recipe to obtain exceptional points on demand.” The method involves controlling the interaction between symmetry-compatible modes of the plasmonic system.

The nanosensor design has only been demonstrated computationally so far. The team is working on integrating the exceptional-point-based nanosensors on a chip.

“Once we optimize some of the main parameters of this system to minimize ohmic and radiative losses, we can start transitioning this research from the theoretical stage to a commercially relevant product,” Kanté said. The team has filed a patent on the technology.