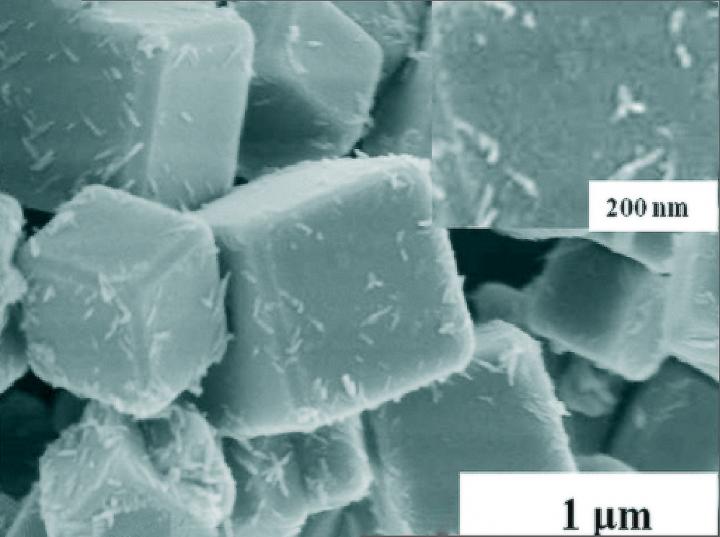 This is a photo made using an electron microscope. Credit: Xianmei Xiang/Lanzhou Institute of Chemical Physics

A team of scientists from the Ural Federal University (UrFU) and the Institute of Metal Physics of the Ural Department of Russian Academy of Sciences have examined the fundamental characteristics of nickel oxide (NiO) nanocrystal to reveal for the first time excitons on the light absorption edge.

An exciton is an electron-hole pair bound with electrostatic coupling that migrates in a crystal and transmits energy within it. The discovery allows researchers to study edge parameters in permitted energy bands, which could lead to the development of new generation optoelectronic devices.

All solid objects, liquids and, under certain circumstances, gases are divided into conductors, which conduct electricity and dielectrics, which do not conduct electricity. Another group of semiconductors, where conductivity occurs due to the movement of charged electrons and holes within the crystal, is between conductors and dielectrics. They are found in systems with impurities that can either release or receive electrons, as well as after irradiation with high-energy light.

“In the physics of semiconductors, there is a notion of fundamental adsorption edge that indicated the edge-level energy of light adsorption,” Anatoly Zatsepin, a co-author of the article and the head of a scientific lab at UrFU, said in a statement. “It corresponds to the energy gap—the area of energies an electron has to pass in the course of movement under the influence of light from the valence band [where it is usually located] to the conductivity band.

“A positively charged empty space that occurs at this place is called a hole. Its electrostatic [Coulombic] interaction with the electron in the conduction band causes the formation of an electron-hole pair, or and exciton,” he added. “In the optic spectrum it can be seen as a narrow line a little below the fundamental adsorption edge. Notably, an exciton does not participate in electrical conductivity, but transfers the absorbed energy.”

Excitons bond energy that is too small, meaning that the temperature should be low in order to register them.

After being irradiated with the light of the short wavelength range, such as UV radiation, an electron-hole pair collapses as the excitation becomes too high. Excessive energy is also released in the form of radiation and its spectrum may be registered. The researchers found excitons in nanosized crystals of nickel oxide.

The team also studied fundamental characteristics of magnesium oxide nanocrystals with small admixtures of nickel. Here they found that excitons were formed upon the transition of the electron from the valence band of the main component to the admixture area. The hole was bound with an electrostatic field generated by the electron.

“We first found excitons with charge transfer at the boundary of fundamental adsorption in nickel oxide and at the impurity adsorption edge in magnesium oxide,” Zatsepin said. “These results may be of interest to specialists in theoretical physics who study the band structure of oxides with strong correlations.

“NiO has been considered as prototype of such oxides for a long time, and many calculation schemes have been tested using this object,” he added. “The results may also be relevant for the development of new optoelectronic devices.”