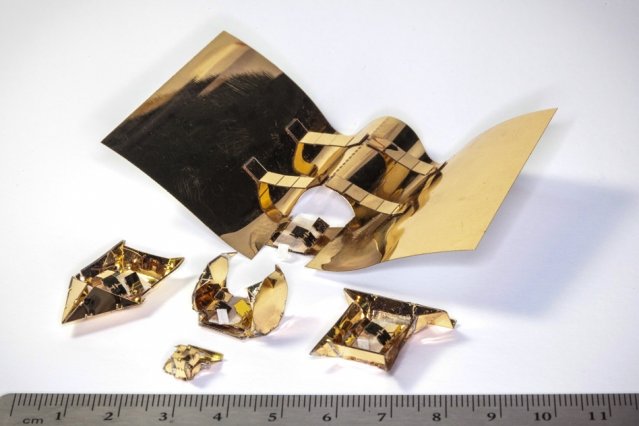 Dubbed “Primer,” a new cube-shaped robot can be controlled via magnets to make it walk, roll, sail, and glide. It carries out these actions by wearing different exoskeletons, which start out as sheets of plastic that fold into specific shapes when heated. After Primer finishes its task, it can shed its “skin” by immersing itself in water, which dissolves the exoskeleton. Credit: MIT

A new robot can perform a number of different tasks including walking, rolling and floating by just shedding its exoskeleton.

Researchers from the Massachusetts Institute of Technology’s (MIT) Computer Science and Artificial Intelligence Laboratory (CSAIL) have designed a shape-shifting robot that can perform different tasks with different exoskeletons. ‘

The cube-shaped robot called Primer can be controlled with magnets to make it walk, roll, sail and glide.

The exoskeletons begin as sheets of plastic and eventually fold into specific shapes when heated.

After the task is completed the robot can shed its skin by immersing itself in water, dissolving the exoskeleton.

“If we want robots to help us do things, it’s not very efficient to have a different one for each task,” Daniela Rus, CSAIL director and principal investigator on the project, said in a statement. “With this metamorphosis-inspired approach, we can extend the capabilities of a single robot by giving it different ‘accessories’ to use in different situations.”

The ability to change exoskeletons to perform different tasks is advantageous because when it is in rolling mode the robot can move twice as fast as when it walks, while “Boat-bot” can float on water and carry almost twice its weight.

“Imagine future applications for space exploration, where you could send a single robot with a stack of exoskeletons to Mars,” postdoc Shuguang Li, one of the co-authors of the study, said in a statement. “The robot could then perform different tasks by wearing different ‘outfits’.”

The researchers said there are a number of applications the robots can be used for.

“Our approach shows that origami-inspired manufacturing allows us to have robotic components that are versatile, accessible and reusable,” Rus said. “I can imagine one day being able to customize robots with different arms and appendages.

“Why update a whole robot when you can just update one part of it?”

The researchers used past research to build Primer, including using magnetic blocks that can assemble themselves into different shapes and centimeter-long microrobots that can be precisely customized from sheets of plastic.

The next step will be to explore giving the robots a wider range of capabilities including driving through water, burrowing in sand and camouflaging their color.