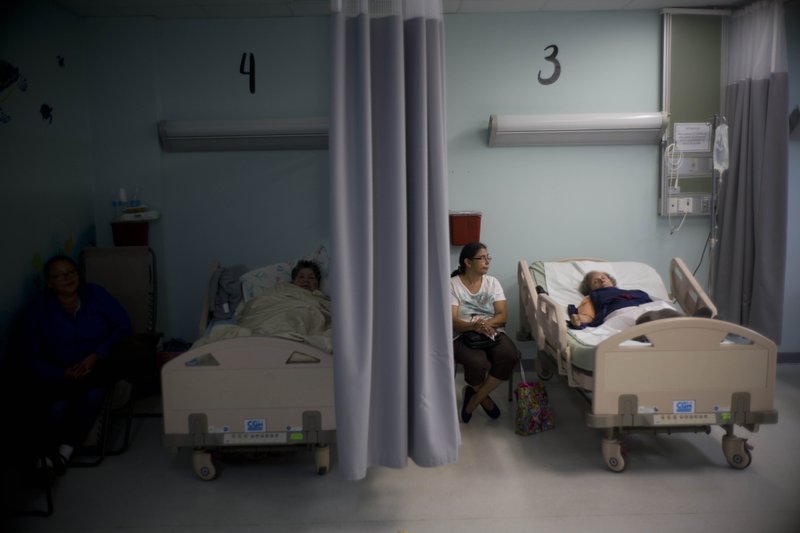 In this Thursday, Sept. 28, 2017, file photo, patients lie in their beds at a hospital in Catano, Puerto Rico. The U.S. Food and Drug Administration says drug shortages are possible because of expected long-term power outages in Puerto Rico. FDA Commissioner Dr. Scott Gottlieb said in a statement Friday, Oct. 6, 2017, that the agency is working to prevent shortages of about 40 medicines. He didn’t name the medicines involved. (AP Photo/Ramon Espinosa)

The Food and Drug Administration on Friday warned that U.S. drug shortages are possible because power outages in Puerto Rico have stopped or limited production at many medicine factories there.

Nearly 10 percent of the medicines used by Americans, plus numerous medical devices, are made in Puerto Rico, which lost most electricity when it was hit hard by Hurricane Maria about two weeks ago.

FDA Commissioner Dr. Scott Gottlieb said in a statement that the agency is working to prevent shortages of about 40 crucial medicines. He has declined to identify those medicines but said Friday that the FDA would disclose any shortages if they occur; drug shortages are routinely listed on the FDA’s website.

“We’re keeping a close watch on the most critical medical products,” Gottlieb said.

The FDA is working with drugmakers and device manufacturers, who are trying to restore partial operations with backup generators, according to the statement. In the most urgent cases, the FDA is helping companies get fuel to keep their generators running and ship finished products.

At a news conference Thursday, Puerto Rican Gov. Ricardo Rossello said power has been restored to 9 percent of customers. The government hopes to have the power back on for a quarter of the island within a month, and for the entire territory of 3.4 million people by March.

Gottlieb said the power disruptions could cause new medicine shortages and exacerbate shortages that existed before Hurricane Maria, and Irma before that, slammed the island.

At least for now, drugmakers say they should be able to prevent shortages by moving around inventory and, in some cases, increasing production at factories in other locations already making those products.

Medicines made in Puerto Rico include AstraZeneca’s cholesterol drug Crestor, antibiotics and drugs for inflammation from Pfizer and Roche’s Accu-Chek blood sugar test strips for diabetics. Eli Lilly makes the active ingredient for its diabetes medicines on the island. And Amgen, a huge biotech drugmaker, produces most of its medicines there, including widely used rheumatoid drug Enbrel, a number of cancer drugs, heart failure drug Corlanor and osteoporosis drugs Prolia and Xgeva.

Hurricane Maria didn’t cause major damage to the roughly 80 medicine and device factories but many have needed cleanup and some repairs, according to several companies contacted by The Associated Press. The companies said operations were also hampered because workers couldn’t get to factories and they were dealing with damage to their homes.

The medical products industry, which set up a large base in Puerto Rico decades ago to take advantage of since-expired tax advantages, is key to the financial health of the debt-laden territory. The FDA said medicines and medical devices account for about 30 percent of Puerto Rico’s gross domestic product, and about 80 percent of those products are used by residents of Puerto Rico and the 50 states.