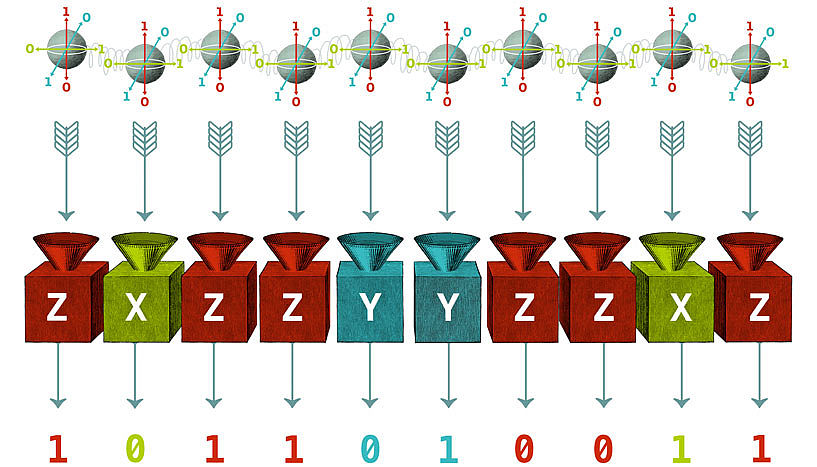 Entangled qubits are sent to measurement devices which output a sequence of zeroes and ones. This pattern heavily depends on the type of measurements performed on individual qubits. If we pick the set of measurements in a peculiar way, entanglement will leave unique fingerprints in the measurement patterns.

One of the main challenges is to make sure that a fully functional quantum computer is working as anticipated. In particular, scientists need to show that the large number of qubits are reliably entangled. Conventional methods require a large number of repeated measurements on the qubits for reliable verification. The more often a measurement run is repeated the more certain one can be about the presence of entanglement. Therefore, if one wants to benchmark entanglement in large quantum systems it will require a lot of resources and time, which is practically difficult or simply impossible. The main question arises: can we prove entanglement with only a low number of measurement trials?

Now researchers from the University of Belgrade, the University of Vienna and the Austrian Academy of Sciences have developed a novel verification method which requires significantly fewer resources and, in many cases, even only a single measurement run to prove large-scale entanglement with a high confidence. For Aleksandra Dimi? from the University of Belgrade, the best way to understand this phenomenon is to use the following analogy: “Let us consider a machine which simultaneously tosses, say, ten coins. We manufactured the machine such that it should produce correlated coins. We now want to validate whether the machine produces the anticipated result. Imagine a single trial revealing all coins landing on tails. This is a clear signature of correlations, as ten independent coins have 0.01% chance to land on the same side simultaneously. From such an event, we certify the presence of correlations with more than 99.9% confidence. This situation is very similar to quantum correlations captured by entanglement.” Borivoje Daki? says: “In contrast to classical coins, qubits can be measured in many, many different ways. The measurement result is still a sequence of zeros and ones, but its structure heavily depends on how we choose to measure individual qubits”, he continues. “We realized that, if we pick these measurements in a peculiar way, entanglement will leave unique fingerprints in the measured pattern”, he concludes.

The developed method promises a dramatic reduction in time and resources needed for reliable benchmark of future quantum devices.