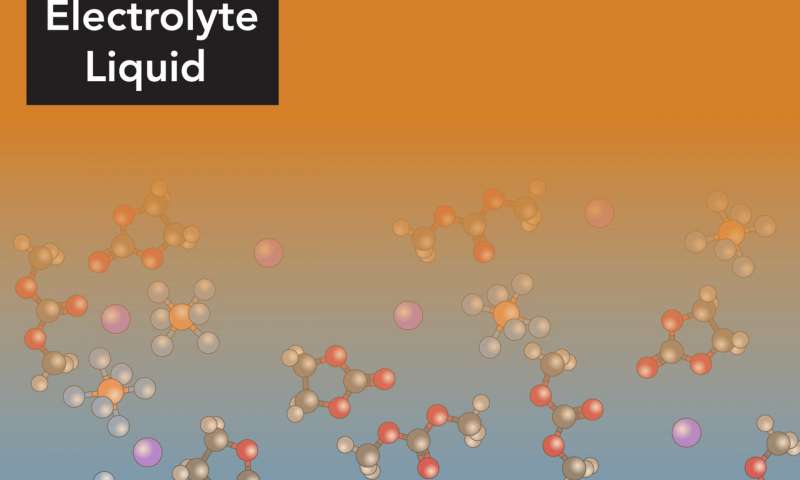 An illustration of electrolyte molecules arranging themselves into layers within a few nanometers of a battery electrode. Lithium ions (purple balls) must navigate through these layers on their way in and out of an electrode during battery charging and discharging. Credit: Greg Stewart/SLAC National Accelerator Laboratory

The lithium-ion batteries that power laptops, electric cars and so many other modern gadgets operate on a simple plan: Lithium ions shuttle back and forth between two electrodes, inserting themselves into one of the electrodes as the battery charges and moving across to the other as the battery drains. The speed and ease of their travel through the battery’s liquid electrolyte help determine how fast the battery can charge.

Now scientists have taken the first close look at what happens within a few nanometers of the electrode, where the normally freely moving electrolyte molecules organize themselves into layers that stand directly in the lithium ions’ paths.

They directly observed this layering for the first time in X-ray experiments at the Department of Energy’s SLAC National Accelerator Laboratory. The results suggest that changing the concentration of lithium ions in the electrolyte might change the arrangement of the molecular layers and make it easier for the ions to get in and out of the electrode.

“That process of the ions finding their way into the electrode is very important in terms of how fast you can charge the battery and how long the battery lasts,” said Michael Toney, a distinguished staff scientist at SLAC’s Stanford Synchrotron Radiation Lightsource (SSRL) and co-leader of the study. “Understanding the nanoscale details of how this works could suggest ways to increase charging speed and efficiency.”

The report has been accepted for publication in Energy & Environmental Science, and an advance copy is posted on the journal’s website.

In lithium-ion batteries, the electrolyte consists of lithium and other ions in a solvent, with the solvent molecules moving around as they would in any other liquid. But based on theory and previous computer simulations, scientists had a strong suspicion that something different happened in the tiny volume of the electrolyte that’s right up next to the electrode. Here, they thought, the presence of the electrode’s hard surface would induce the solvent molecules to line up and form orderly layers. However, confirming this through experiments proved difficult.

For these latest experiments, Toney’s team used a metal oxide material to represent the electrode, bathed in an electrolyte typically found in commercial lithium-ion batteries.

By focusing a high-brilliance X-ray beam from SSRL on the surface of the electrode and analyzing the X-rays that bounced back through the electrolyte, like light reflecting from a mirror, the researchers were able to determine the structures and positions of individual solvent molecules and lithium ions that were within a few billionths of a meter of the electrode surface, said Hans-Georg Steinrück, a postdoctoral researcher in Toney’s group and co-leader of the experiments. Molecular dynamics simulations complemented and agreed with the experimental results.

However, as the concentration of lithium ions in the electrolyte increased, the arrangement of the layers changed; it became a bit more orderly, and the layers were farther apart, Steinrück said. This led the researchers to a conclusion that seems almost the opposite of what you’d expect.

“Our hypothesis is that if you want to improve lithium ion transport, you want to decrease the amount of order in the layers, and that means decreasing the lithium ion concentration rather than increasing it,” he said.

Steinrück said the team will be exploring this avenue of research further, adding that the foundational knowledge obtained with this technique can also be applied to studies of other types of next-generation batteries and energy storage systems.