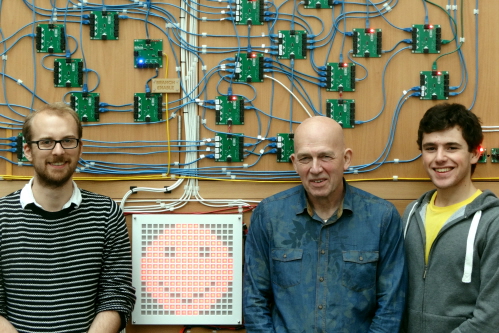 [from L-R] Richard Grafton, Professor David May and Sam Russell, in front of the Big Hex Machine Source: University of Bristol

A giant, fully operational 16-bit computer that aims to demystify the strange and seemingly magical mechanisms of computation has been built by students and staff from the University of Bristol.

The Big Hex Machine, specifically designed to explain how a computer works, has been built out of over 100 specially designed four-bit circuit boards and will enable students to be taught about the fundamental principles of computer architecture from just a few basic components.

The computer – ‘an ultimate teaching tool’ – will be used as part of this year’s computer architecture unit and will be an invaluable resource to enable students to get creative with what is traditionally seen as a complicated subject.  The machine’s instruction set requires a very small compiler, but it is powerful enough to implement useful programs.

David May, Professor of Computer Science in the Department of Computer Science, who designed the architecture and its accompanying language, said: “You cannot understand how a computer works by taking one apart! In our giant machine, all of the structure is clearly visible – as is the movement of information as it executes programs.  It demonstrates the principle used in all computers – general-purpose hardware controlled by a stored program. ”

The wall-mounted computer, based in the Merchant Venturers School of Engineering, measures over eight square metres. Along with the processor, it has input and output devices, a custom built LED matrix, a web-based application to control its operation, and a complete toolchain for students to write, build and execute their own software.

Richard Grafton, Senior Creative Teaching Technologist in the Department of Computer Science, said: “Building such a machine was not a trivial task. It’s a result of a great collaboration between students and staff and a real testament to persistence, commitment and teamwork. Most importantly, it’s an achievement of thinking a bit differently.”

Sam Russell, a third year computer science student, who worked on building both the prototype and final machine, added: “It was exciting for me to almost cast myself back to the problems encountered by the original computer building engineers.  I literally put my blood, sweat and tears into something that is an art work, an educational tool, a gigantic toy, a spark to reminisce of the old days, but most of all, something that demystifies the magic to something that everyone can understand.”

The machine will be officially unveiled at a special event later in the year.