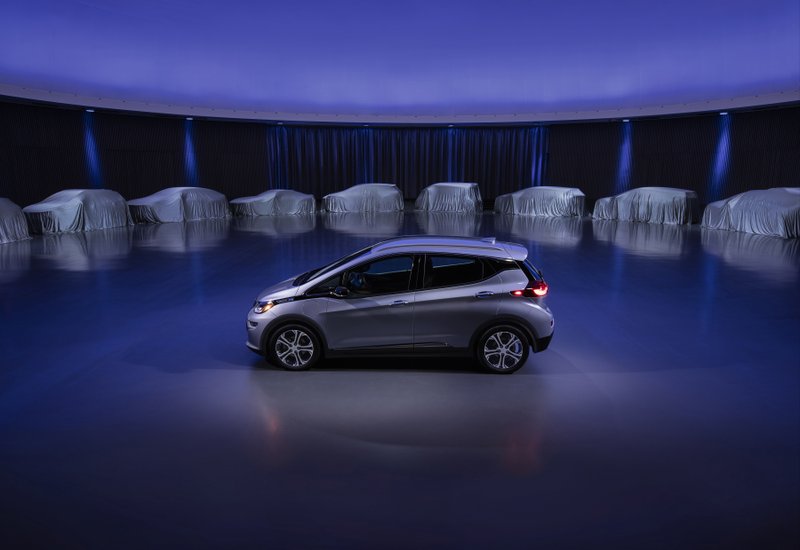 Even though gasoline-powered SUVs are what people are buying now, General Motors is betting that electric vehicles will be all the rage in the not-to-distant future.

The Detroit automaker is promising two new EVs on Chevrolet Bolt underpinnings in the next 1 ½ years and more than 20 electric or hydrogen fuel cell vehicles by 2023. The company sees its entire model lineup running on electricity in the future, whether the source is a big battery or a tank full of hydrogen.

“We are far along in our plan to lead the way into that future world,” product development chief Mark Reuss said Monday at a news conference at the GM technical center north of Detroit.

The event was billed as a “sneak peak” into GM’s electric future. The company also pledged to start producing hydrogen fuel cell vehicles for commercial or military use in 2020. And it promised an increase in the number of electric fast-charging stations in the U.S., which now total 1,100 from companies and governments, taking a shot at electric competitor Tesla Inc. by saying the system would not be “walled off” from electric vehicles made by other manufacturers.

Tesla has 951 fast-charging stations globally that can only be used by Tesla owners.

The hastily called event was short on specifics, and it came just a day before the CEO of Ford Motor Co., GM’s prime competitor, was to announce its business plan that likely will include electric and autonomous vehicles as priorities.

The two new GM electrics in the immediate future likely will be SUVs or a sportier car designed to compete with Tesla’s upcoming Model 3 sedan, Reuss said. The Model 3, which is now in the early stages of production, will go hood-to-hood with the Bolt, starting around $35,000 (excluding a $7,500 federal tax credit) with a range of over 200 miles. The Bolt starts at $37,495 excluding the credit.

Behind Reuss and other executives were nine vehicles covered with tarps that the company said were among the 20 to be unveiled by 2023. GM pulled away the tarps on three of them, clay models of low-slung Buick and Cadillac SUVs and a futuristic version of the Bolt that looked like half of an airport control tower glued to the top of a car body. The rest remained covered.

Reuss said the new vehicles that aren’t built on the Bolt platform will have GM’s next-generation electric architecture, which he said will be more efficient with longer range than the Bolt’s 238 miles. Through August, GM has sold 11,670 Bolts, which is less than 1 percent of GM’s total U.S. sales so far this year.

Reuss promised that the new vehicles will be profitable as people become more accustomed to the advancing technology. “We can’t just flip a switch and make the world go all-electric,” he said.