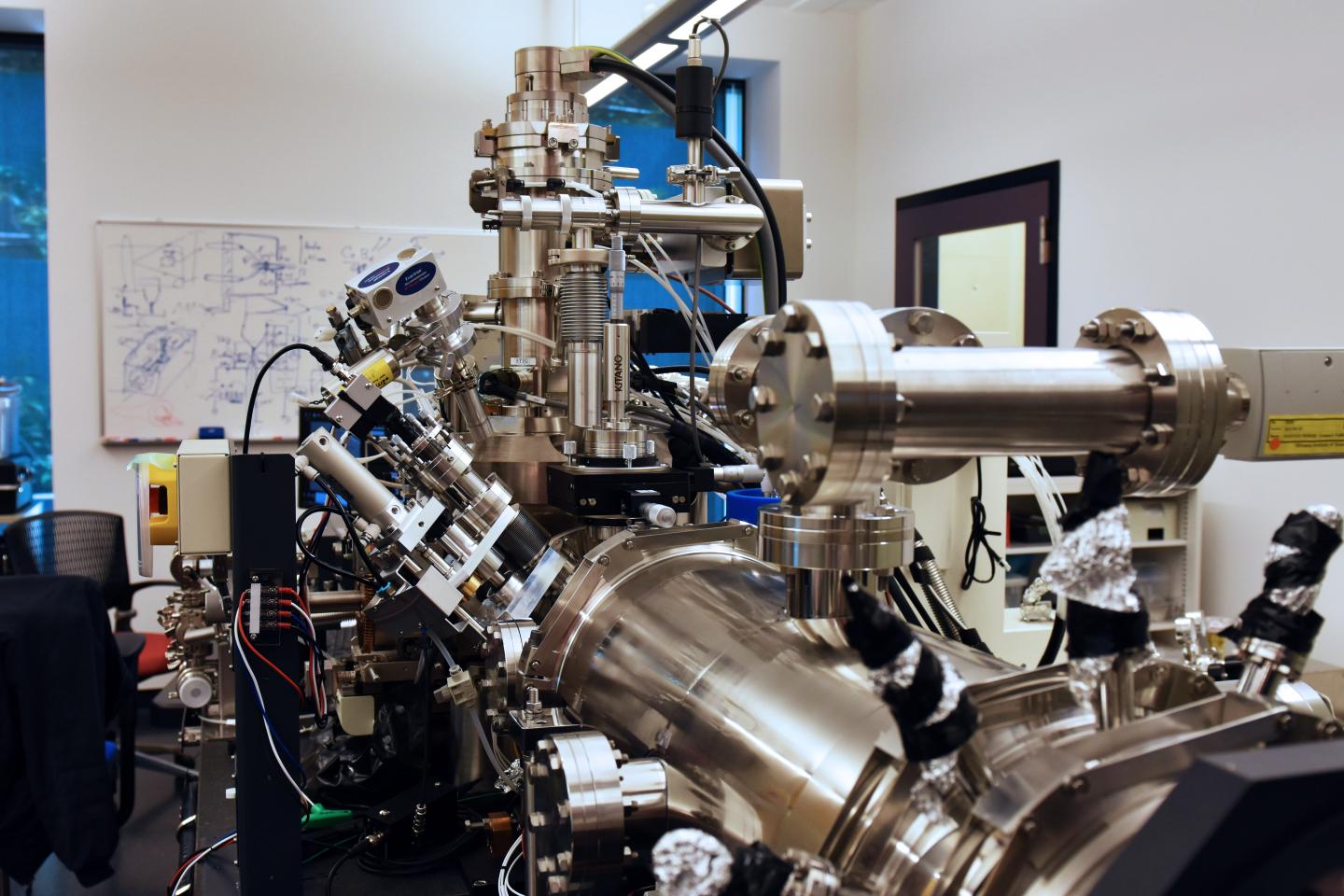 This microscope was based on a commercial device which has been customized and expanded to reach even smaller scales and high resolution. No optical lenses are used to create the microscopic images in this unique electron microscope. (Credit: OIST)

Developing new scientific devices pushing the limits of what we can observe and measure does not occur overnight. There are typically baby steps involved, small and continuous improvements to counter the numerous technical hurdles arising on the way. The new state-of-the-art electron microscope developed by Prof. Tsumoru Shintake at the Okinawa Institute of Science and Technology Graduate University (OIST) is no exception to the rule. Through the development of this one-of-a-kind microscope, OIST researchers reported such a crucial step in the journal Microscopy using atom-thin layers of graphene to enhance microscopic images of minuscule viruses.

Electron microscopes relies on an electron beam rather than light to illuminate the target sample. The electron beam would hit the sample, with the resulting scattering of the electrons allowing scientists to build an accurate image of the target. This way, electron microscopes can achieve a much higher resolution compared to light-based devices. Prof. Shintake’s unique microscope does not even rely on optical lenses any longer, instead using a detector to reveal which electrons hit the tiny virus samples and reconstructing the image through a computer algorithm. Moreover, while conventional electron microscopes require high-energy electrons, this microscope rather focuses on low-energy electrons which can potentially be much more efficient at imaging viruses if the associated technical issues can be overcome.

“Low-energy electrons interacts very strongly with matter,” explained Dr. Masao Yamashita, the first author of the study. “They are great for imaging biological specimens, made up of light materials like carbon, oxygen and nitrogen, which are basically transparent to high energy electrons.”

Using low energy electrons however has an important drawback: because of its high sensitivity with matter, a low energy electron beam would interact with the target sample but also with everything else like the support plate and film on which the sample is laying. The resulting image would not distinguish the study material from the background.

To counter this effect, researchers from the Quantum Wave Microscopy Unit turned to the unique properties of graphene. They synthesized a film made of a single layer – one atom thin – of graphene on which the biological samples, like the viruses they study, will be displayed.

Graphene is extremely conductive, which means electrons can cross the layer very easily. This way, the low energy electrons will interact very little with the background graphene layer and much more with the virus sample which will stand out with a great contrast. This high conductivity also prevents “charging-up”, an accumulation of electrons on the film that would distort the final image. The thinness of the film also provides a much brighter background – thus a much better contrast with the study material – than conventional carbon films.

However, a graphene film is not so easy to handle. It is so clear that it needs to be spotless and free from any contaminants, leading the OIST scientists to develop a technique to meticulously clean the graphene film.

There is also an issue with loading the virus sample onto the graphene film. The graphene film is oily, while biological preparations would typically be in water-based. They would not mix very well: if you just add the viruses onto the film, the results are viruses clinging together in scattered dense spots making it impossible to reveal individual details.

To solve this second issue, OIST researchers resorted to using centrifugal force to scatter the viruses onto the entire surface of the film, preventing them from making clumps. The viruses are loaded in a tube with the graphene film sitting at one end, while the other end is attached to a vertical axis which is spun up to 100,000 rotations per minute. The centrifugal force pushes the viruses onto the graphene film and prevent them from regrouping, allowing to see distinctive details on each specimen with the electron microscope.

The outcome of all these efforts is higher resolution pictures of viruses’ shells, whose shape and morphological details can provide clues on how to fight them. To demonstrate their successful work, OIST researchers used the bacteriophage T4, a well-known virus that attacks specific bacteria. Using graphene and a low-voltage electron beam enabled them to reveal minuscule details like the fiber-like limbs that the virus uses to hook onto its bacterial prey, previously invisible on a conventional carbon film.

Dr. Yamashita and his team are already working on the next step to further increase the quality of the images. To reconstruct images and to study the morphology of various types of specimen in the future, the ability to confidently compare microscopic images of biological materials at such a tiny scale require very high consistency between samples. To achieve this condition, the researchers are now developing a robust way to prepare the viruses by spraying them onto the graphene film in a sterile vacuum. Tiny viruses will not be able to hide out of sight for very much longer.