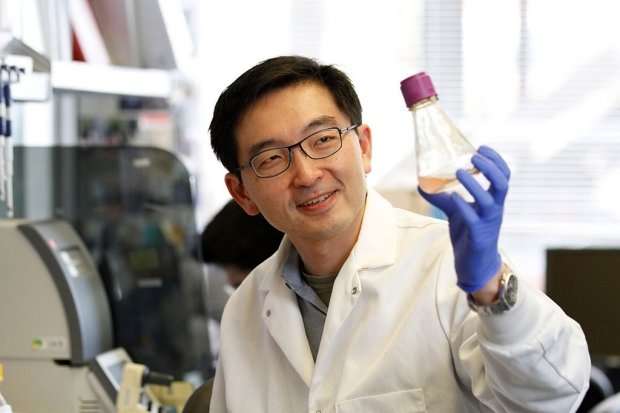 Kevin Wang holds a flask of cells that have been engineered to produce the Regina protein, a mammalian protein similar in structure to the active component of honeybee royal jelly. Credit: Paul Sakuma

A protein used by honeybees could hold the key to a fountain of youth for embryonic stem cells.

Researchers from the Stanford University School of Medicine found a mammalian protein—NHLRC3— that helps prevent embryonic stem cell aging in mice by causing the cells to remain pluripotent.

The protein, which the researchers dubbed Regina, is similar in structure to royalactin, the royal jelly that serves as the queen-maker for the honey bee and has cross-species effects on longevity, fertility, and regeneration.

In the bee hierarchical structure, worker bees select a few potential queens from female larvae and nurture them with the royal jelly during their development.

“In folklore, royal jelly is kind of like a super-medicine, particularly in Asia and Europe, but the DNA sequence of royalactin, the active component in the jelly, is unique to honeybees,” assistant professor of dermatology Kevin Wang, MD, PhD, said in a statement. “Now, we’ve identified a structurally similar mammalian protein that can maintain stem cell pluripotency.”

Humans have long considered how a royal jelly diet could trigger the extreme differences between queen bees and the much smaller workers.

“I’ve always been interested in the control of cell size and the honeybee is a fantastic model to study this,” Wang said. “These larvae all start out the same on day zero, but end up with dramatic and lasting differences in size. How does this happen?”

The researchers applied royalactin to mouse embryonic stem cells to examine how the cells respond.

“For royal jelly to have an effect on queen development, it has to work on early progenitor cells in the bee larvae,” Wang said. “So we decided to see what effect it had, if any, on embryonic stem cells.”

When embryonic stem cells are grown in the laboratory, they abandon their stem cell state and differentiate into specialized cells. In the past, scientists have added molecules to the stem cells, which inhibit differentiation to the environment in which the stem cells grow.

The researchers found that adding royalactin halted the embryonic stem cells from differentiating, even without the inhibitors.

“This was unexpected,” Wang said. “Normally, these embryonic stem cells are grown in the presence of an inhibitor called leukemia inhibitor factor [LIF] that stops them from differentiating inappropriately in culture, but we found that royalactin blocked differentiation even in the absence of LIF.”The cultured LIF-free cells grew for up to 20 generations in the study and additional testing showed that the royalactin-treated stem cells exhibited gene-expression profiles similar to stem cells grown in the presence of the inhibitors, producing proteins known to be associated with pluripotency while tamping down the production of proteins crucial for differentiation.

However, because mammals do not naturally produce royalactin, the researchers combed through a database that infers the three-dimensional structure of proteins and found that NHLRC3 forms a structure similar to the honeybee protein and was produced early in embryonic development in all animals.

They also found that NHLRC3 maintains pluripotency in mouse embryonic cells and causes a similar gene-expression pattern in them as in those cells exposed to royalactin.

The discovery opens up the possibility of new pathways to pluripotency and new ways to keep stem cells in a state of purgatory until they are needed for future therapies.The researchers now plan to examine whether Regina has therapeutic value in wound healing or cell regeneration in adult animals. They also plan to look for more or better ways to keep embryonic stem cells pluripotent when grown in the lab.