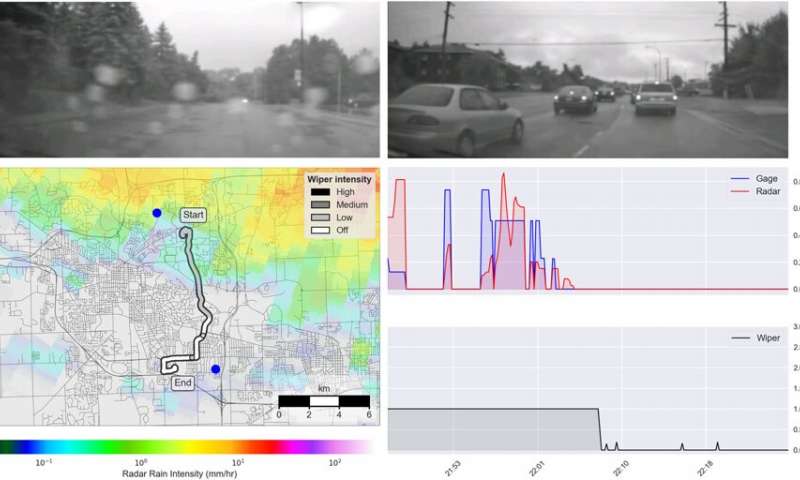 Analysis of a single vehicle trip occurring from 21:46–22:26 on August 11, 2014. The top two panels show video footage during the rainy (left) and dry (right) segments of the trip. The bottom left panel shows a map of the vehicle’s trip, with the wiper intensity indicated by color. A radar overlay shows the average rainfall intensity over the 40-minute time period. Blue circles represent the gages nearest to the vehicle path. The two bottom right panels show the precipitation intensity as estimated by radar and gage measurements (center), and the 1-minute average wiper intensity (bottom). Credit: Scientific Reports

One of your car's oldest features has been put to a new, high-tech use by University of Michigan researchers.

Utilizing a test fleet in the city of Ann Arbor, engineers tracked when wipers were being used and matched it with video from onboard cameras to document rainfall. They found that tracking windshield wiper activity can provide faster, more accurate rainfall data than radar and rain gauge systems we currently have in place.

A community armed with that real-time data could move more quickly to prevent flash-flooding or sewage overflows, which represent a rising threat to property, infrastructure and the environment.

Coupled with "smart" stormwater systems—infrastructure outfitted with autonomous sensors and valves—municipalities could potentially take in data from connected vehicles to predict and prevent flooding.

"These vehicles offer us a way to get rainfall information at resolutions we'd not seen before," said Branko Kerkez, U-M assistant professor of civil and environmental engineering. "It's more precise than radar, and allows us fills gaps left by existing rain gage networks."

Our best warnings for flood conditions come from the combination of radar tracking from satellites and rain gauges spread over a wide geographic area. Both have poor spatial resolution, meaning they lack the ability to capture what's happening at street-level.

Earlier this year, the European Academy of Sciences reported the number of floods and extreme rainfall events increased by more than 50 percent this decade and happen four times more often than they did in 1980.

"Because of the sparseness of radar and rain gauge data, we don't have enough information about where rain is occurring or when it's occurring to reduce the consequences of flooding," Vasudevan said. "If you have fine-grain predictions of where flooding occurs, you can control water networks efficiently and effectively to prevent all sorts of dangerous chemicals from appearing inside our water supply due to runoff."

Creating a blanket system of sensors across a city for street-level data on rain events would be costly. By utilizing connected vehicles, U-M is tapping a resource already in place now that will only grow larger in the future.

Researchers collected data from a set of 70 cars outfitted with sensors embedded in windshield wipers and dashboard cameras. The vehicles were part of a program run by the U-M Transportation Research Institute in 2014.

That program, called Safety Pilot, was at the time the world's largest connected vehicle test program with roughly 3,000 participants. It continues, and is now the Ann Arbor Connected Vehicle Test Environment.

Kerkez and Vasudevan said their research represents a first step in creating a smart infrastructure system that is fed by and responds to data as it is collected from vehicles on the road. But more work will be needed to bring the concept to fruition.

"One day, when everything is connected, we're going to see the benefits of this data collection at a system scale," Kerkez said. "Right now, we've made connections between cars and water, but there will surely be more examples of data sharing between interconnected infrastructure systems."