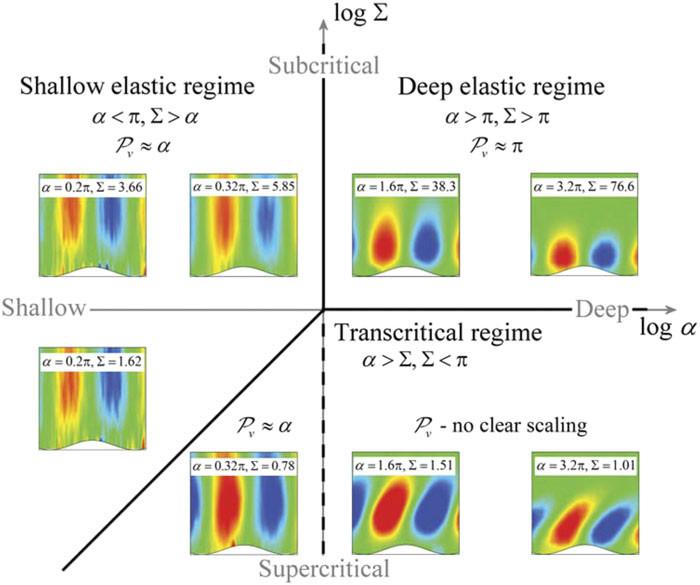 This phase diagram summarizes results from a study by the Micro/Bio/Nanofluids Unit on the flow of viscoelastic fluids over wavy surfaces. The flow patterns depend on fluid elasticity (encapsulated by Sigma, on the vertical axis) and the depth of the channel relative to the surface wavelength (which is alpha, on the horizontal axis). The bottom-right corner of the diagram is the specific region where the elasticity and the channel depth are in a “sweet spot,” so they combine to result in the vorticity amplification at the “critical layer.” Credit: OIST

Viscoelastic fluids are everywhere, whether racing through your veins or through 1,300 kilometers of pipe in the Trans-Alaska Pipeline. Unlike Newtonian fluids, such as oil or water, viscoelastic fluids stretch like a sticky strand of saliva. Chains of molecules inside the fluids grant them this superpower, and scientists are still working to understand how it affects their behavior. Researchers at the Okinawa Institute of Science and Technology Graduate University (OIST) have brought us one step closer by demonstrating how viscoelastic fluids flow over wavy surfaces, and their results are unexpected.

“To me it was not intuitive, and I’ve worked with these fluids for nearly 20 years,” said Simon Haward, group leader in the Micro/Bio/Nanofluidics Unit and first author of the study. The paper, published in Physics of Fluids on November 5, 2018, is the third in a series of three studies putting new theories of viscoelastic fluids to the test.

When water flows through a smooth tube, its motion is uniform throughout. But when water makes contact with a wavy surface, it breaks like the tide over the seashore. The water reacts to each peak and trough of the disrupting wave, thrown into spiraling swirls known as vortices. The spinning motion, known as vorticity, is most pronounced near the wavy wall and dissipates at a calculable distance away.

Scientists have witnessed this scenario unfold countless times in water and other Newtonian fluids. But before now, analogous experiments had never been conducted in viscoelastic fluids, which are predicted to behave much differently. OIST researchers set out to fill that gap in the literature.

Recent theoretical work suggests that waves send viscoelastic fluids spinning much like Newtonian fluids, but with one key difference. While the swirling motion induced in Newtonian fluids decays with distance, vortices in viscoelastic fluids can actually become amplified at a specific distance away. This region of amplified action has been dubbed the “critical layer” in theory, but hadn’t been observed experimentally.

“Normally, we think if a fluid is more viscoelastic, you’ll see more strange effects,” Haward said. “But in this case, when the fluid is highly elastic, the observable effect disappears.”

In past research, the Micro/Bio/Nanofluidics Unit designed experiments and specialized equipment to catch these critical layers in action. Their efforts resulted in the first experimental evidence of the phenomenon. Now, the researchers have constructed a detailed chart describing how the critical layer shifts when the channel is widened, the wavelength is lengthened or the fluid’s flow rate is increased.

“It was surprising because the theory seemed counterintuitive, but our experimental results fell into the exact same phase diagram as the theory predicted,” said Haward. “Basically, our experiments fully confirmed the theory.”

The comprehensive research establishes a strong starting point for future studies of viscoelastic fluids. The fundamental properties of these stretchy fluids have direct implications in the oil industry, medicine and biotechnology, and help shape the world around us. With this study, scientists can now begin to factor the critical layer into their calculations, which may help to improve applications or find new avenues for viscoelastic fluids in their research.