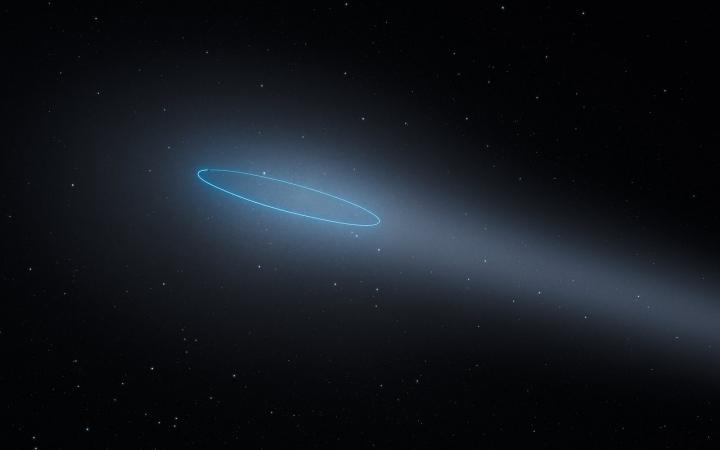 This artist’s impression shows the binary asteroid 288P, located in the main asteroid belt between the planets Mars and Jupiter. The object is unique as it is a binary asteroid which also behaves like a comet. The comet-like properties are the result of water sublimation, caused by the heat of the Sun. The orbit of the asteroids is marked by a blue ellipse.

With the help of the NASA/ESA Hubble Space Telescope, a German-led group of astronomers have observed the intriguing characteristics of an unusual type of object in the asteroid belt between Mars and Jupiter: two asteroids orbiting each other and exhibiting comet-like features, including a bright coma and a long tail. This is the first known binary asteroid also classified as a comet. The research is presented in a paper published in the journal Nature today.

In September 2016, just before the asteroid 288P made its closest approach to the Sun, it was close enough to Earth to allow astronomers a detailed look at it using the NASA/ESA Hubble Space Telescope [1].

The images of 288P, which is located in the asteroid belt between Mars and Jupiter, revealed that it was actually not a single object, but two asteroids of almost the same mass and size, orbiting each other at a distance of about 100 kilometres. That discovery was in itself an important find; because they orbit each other, the masses of the objects in such systems can be measured.

But the observations also revealed ongoing activity in the binary system. “We detected strong indications of the sublimation of water ice due to the increased solar heating — similar to how the tail of a comet is created,” explains Jessica Agarwal (Max Planck Institute for Solar System Research – https://www.mps.mpg.de/de, Germany), the team leader and main author of the research paper. This makes 288P the first known binary asteroid that is also classified as a main-belt comet.

Understanding the origin and evolution of main-belt comets — comets that orbit amongst the numerous asteroids between Mars and Jupiter — is a crucial element in our understanding of the formation and evolution of the whole Solar System. Among the questions main-belt comets can help to answer is how water came to Earth [2]. Since only a few objects of this type are known, 288P presents itself as an extremely important system for future studies.

The various features of 288P — wide separation of the two components, near-equal component size, high eccentricity and comet-like activity — also make it unique among the few known wide asteroid binaries in the Solar System. The observed activity of 288P also reveals information about its past, notes Agarwal: “Surface ice cannot survive in the asteroid belt for the age of the Solar System but can be protected for billions of years by a refractory dust mantle, only a few metres thick.”

From this, the team concluded that 288P has existed as a binary system for only about 5000 years. Agarwal elaborates on the formation scenario: “The most probable formation scenario of 288P is a breakup due to fast rotation. After that, the two fragments may have been moved further apart by sublimation torques.”

The fact that 288P is so different from all other known binary asteroids raises some questions about whether it is not just a coincidence that it presents such unique properties. As finding 288P included a lot of luck, it is likely to remain the only example of its kind for a long time. “We need more theoretical and observational work, as well as more objects similar to 288P, to find an answer to this question,” concludes Agarwal.