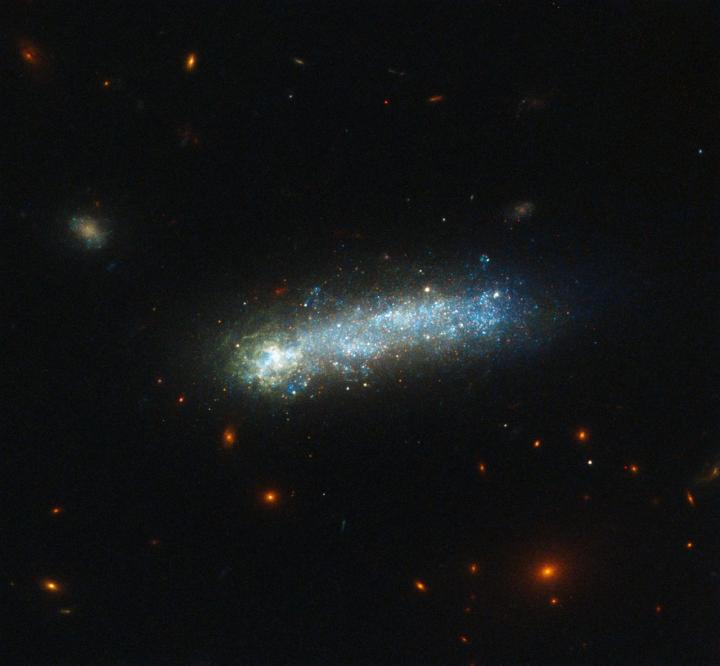 This new image from the NASA/ESA Hubble Space Telescope shows a cosmic tadpole, with its bright head and elongated tail, wriggling through the inky black pool of space. Tadpole galaxies are rare and difficult to find in the local Universe. This striking example, named LEDA 36252, was explored as part of a Hubble study into their mysterious properties — with interesting results.

The Universe is a swirling pool of galaxies moving through the emptiness of space. Whilst spiral galaxies and ellipticals are the two main galaxy types in the Universe, there are also other, odder types — as shown in this image from the NASA/ESA Hubble Space Telescope, taken with the Wide Field Camera 3 (WFC3).

The galaxy LEDA 36252 — also known as Kiso 5639 — is an example of what is known as a tadpole galaxy because of their bright, compact heads and elongated tails [1]. Tadpole galaxies are unusual, and rare in the local Universe — in a sample of 10 000 galaxies within the local Universe, only 20 would be tadpoles — but they are more common in the early Universe.

This image of LEDA 36252 was obtained as part of a scientific study into the galaxy’s properties. It is an ideal cosmic laboratory for astronomers to study the accretion of cosmic gas, starburst activity, and the formation of globular star clusters.

The stars in tadpole galaxies are generally very old — living fossils from the early Universe and from the time when these galaxies formed. LEDA 36252 is in general no exception to that.

However, studying LEDA 36252 has led also to some unexpected results: its head contains a mass of surprisingly young stars with a total mass equivalent to some 10 000 Suns. These stars are grouped into large clusters and appear to consist mainly of hydrogen and helium with hardly any other elements. Astronomers think that this new burst of star formation was triggered when the galaxy accreted primordial gas — gas which was only very slightly enriched by other elements created by stellar fusion processes in the past — from its surroundings.

Also the elongated tail, seen stretching away from the head and scattered with bright blue stars, contains at least four distinct star-forming regions. These appear to be older than the one in the head.

The observations also showed signs of strong stellar winds and supernova explosions, which have blasted holes through LEDA 36252’s head and created multiple cavities. Wispy filaments, comprising gas and some stars, extend away from the main body of the cosmic tadpole.

The WFC3 observations comprising this image cover a wide portion of the spectrum, including ultraviolet, optical, H-alpha, and infrared emission. Together, they paint a beautifully detailed picture of LEDA 36252.