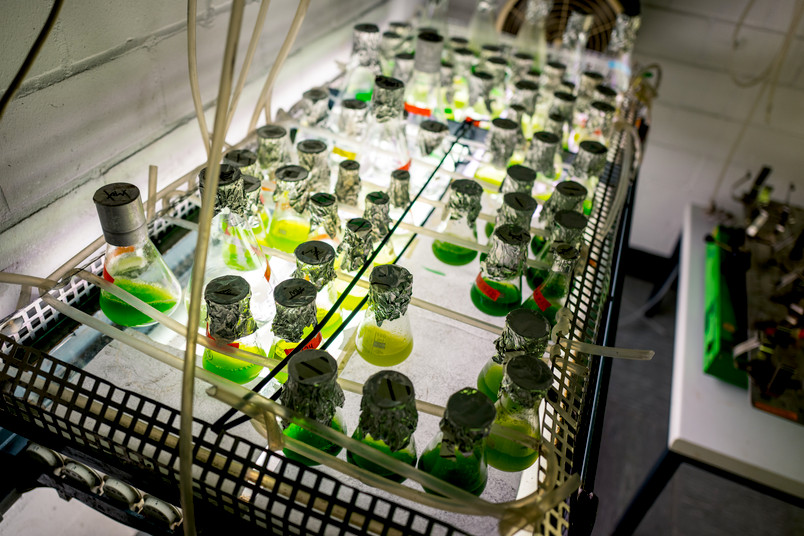 Green algae use excess electrons from photosynthesis for the production of hydrogen. Credit: RUB, Kramer

Researchers at Freie Universität Berlin and the Ruhr-Universität Bochum have uncovered a crucial reaction principle of hydrogen-producing enzymes. Teams led by Dr Ulf-Peter Apfel in Bochum and Dr Sven Stripp at Freie Universität investigated the production of molecular hydrogen in single-cell green algae. They were able to demonstrate how the enzyme succeeds in transferring two electrons in succession to two hydrogen ions and thereby assume stable intermediate states.

Hydrogen gas is viewed as the energy source of the future. Thus, there is considerable industrial interest in elucidating the mechanism of biological production. The findings were published in the latest issue of the journal Angewandte Chemie.

In living nature a variety of chemical reactions take place very slowly. The use of enzymes increases the likelihood or the speed of a reaction (catalysis). Frequently the supply and removal of electrons also plays a role – this is referred to as reduction and oxidation. Special enzymes, the hydrogenases, accelerate the conversion of hydrogen ions (protons) to hydrogen gas with high efficiency. They absorb excess electrons that are generated during photosynthesis and release hydrogen gas as a by-product.

This process can be described as a reduction of two protons with two electrons, whereby the reaction takes place in several steps.

“After receiving a first electron, an enzyme is typically less likely to accept a second one,” stresses Sven Stripp. In spite of this, two electrons can be transferred to two protons. Using synthetic hydrogenase enzymes, advanced infrared spectroscopy, and electrochemical methods, the researchers investigated how this is possible. They demonstrated that the uptake of an electron at the catalytic center of the enzyme is coupled with the binding of a proton. The positive charge of the proton compensates for the negative charge of the electron.

In chemistry this process is known as proton-coupled electron transfer (PCET). “Thus, the second electron can be transferred with comparable probability as the first one,” says Ulf-Peter Apfel.

According to the authors, this observation has high relevance for understanding the catalytic mechanism of hydrogenases and for the design of synthetic complexes for the production of hydrogen gas. In addition, the scientists speculate that PCET processes could explain the uptake of multiple electrons in other enzymes as well because many of these macromolecules carry catalytic centers of iron and sulfur atoms, similar to those of hydrogenases.