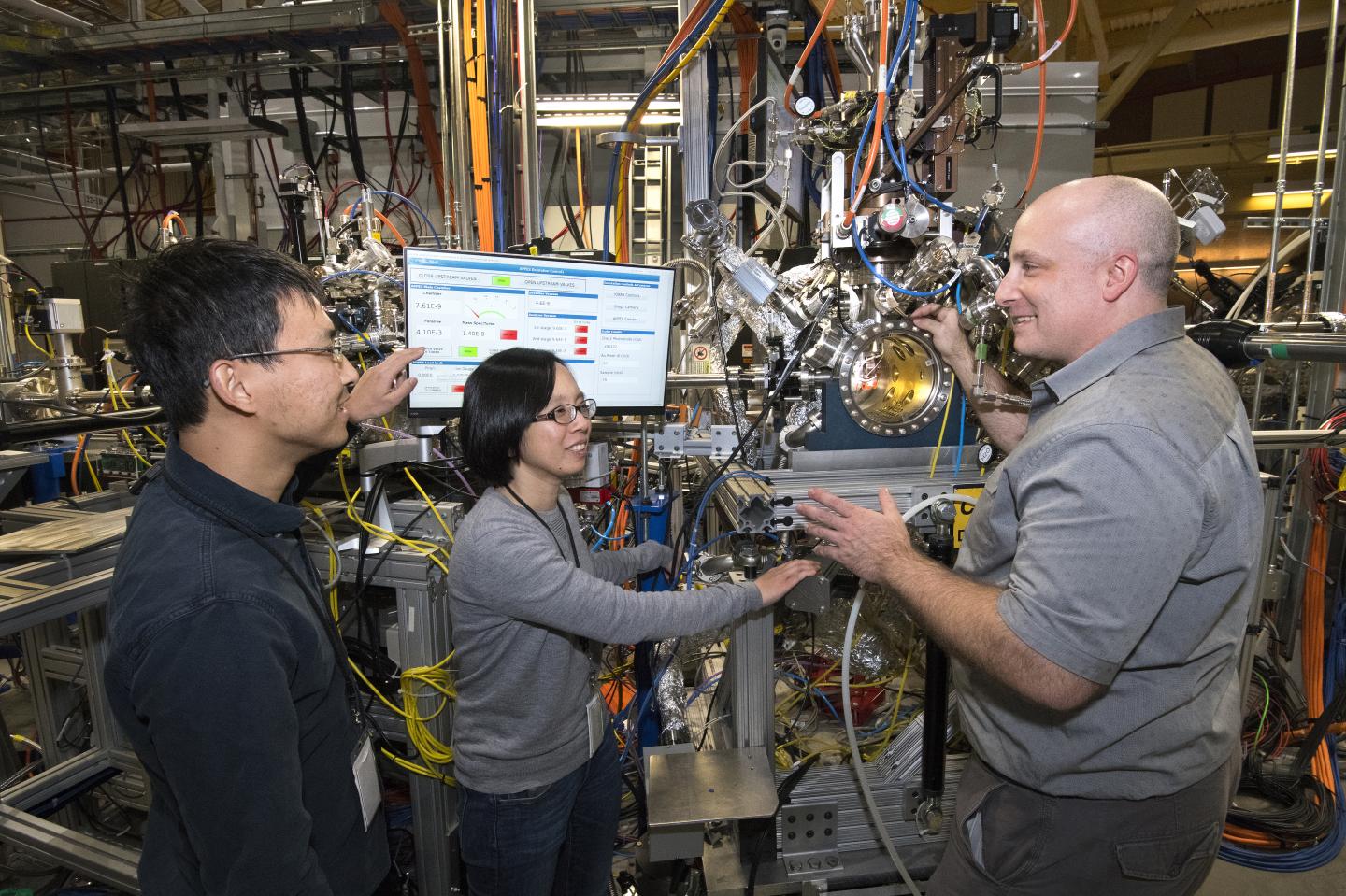 Hydrogen fuel cells are a promising technology for producing clean and renewable energy, but the cost and activity of their cathode materials is a major challenge for commercialization. Many fuel cells require expensive platinum-based catalysts–substances that initiate and speed up chemical reactions–to help convert renewable fuels into electrical energy. To make hydrogen fuel cells commercially viable, scientists are searching for more affordable catalysts that provide the same efficiency as pure platinum.

“Like a battery, hydrogen fuel cells convert stored chemical energy into electricity. The difference is that you’re using a replenishable fuel so, in principle, that ‘battery’ would last forever,” said Adrian Hunt, a scientist at the National Synchrotron Light Source II (NSLS-II), a U.S. Department of Energy (DOE) Office of Science User Facility at DOE’s Brookhaven National Laboratory. “Finding a cheap and effective catalyst for hydrogen fuel cells is basically the holy grail for making this technology more feasible.”

Taking part in this worldwide search for fuel cell cathode materials, researchers at the University of Akron developed a new method of synthesizing catalysts from a combination of metals–platinum and nickel–that form octahedral (eight-sided) shaped nanoparticles. While scientists have identified this catalyst as one of the most efficient replacements for pure platinum, they have not fully understood why it grows in an octahedral shape. To better understand the growth process, the researchers at the University of Akron collaborated with multiple institutions, including Brookhaven and its NSLS-II.

“Understanding how the faceted catalyst is formed plays a key role in establishing its structure-property correlation and designing a better catalyst,” said Zhenmeng Peng, principal investigator of the catalysis lab at the University of Akron. “The growth process case for the platinum-nickel system is quite sophisticated, so we collaborated with several experienced groups to address the challenges. The cutting-edge techniques at Brookhaven National Lab were of great help to study this research topic.”

Using the ultrabright x-rays at NSLS-II and the advanced capabilities of NSLS-II’s In situ and Operando Soft X-ray Spectroscopy (IOS) beamline, the researchers revealed the chemical characterization of the catalyst’s growth pathway in real time. Their findings are published in Nature Communications.

“We used a research technique called ambient-pressure x-ray photoelectron spectroscopy (AP-XPS) to study the surface composition and chemical state of the metals in the nanoparticles during the growth reaction,” said Iradwikanari Waluyo, lead scientist at IOS and a co-corresponding author of the research paper. “In this technique, we direct x-rays at a sample, which causes electrons to be released. By analyzing the energy of these electrons, we are able to distinguish the chemical elements in the sample, as well as their chemical and oxidation states.”

Hunt, who is also an author on the paper, added, “It is similar to the way sunlight interacts with our clothing. Sunlight is roughly yellow, but once it hits a person’s shirt, you can tell whether the shirt is blue, red, or green.”

Rather than colors, the scientists were identifying chemical information on the surface of the catalyst and comparing it to its interior. They discovered that, during the growth reaction, metallic platinum forms first and becomes the core of the nanoparticles. Then, when the reaction reaches a slightly higher temperature, platinum helps form metallic nickel, which later segregates to the surface of the nanoparticle. In the final stages of growth, the surface becomes roughly an equal mixture of the two metals. This interesting synergistic effect between platinum and nickel plays a significant role in the development of the nanoparticle’s octahedral shape, as well as its reactivity.

“The nice thing about these findings is that nickel is a cheap material, whereas platinum is expensive,” Hunt said. “So, if the nickel on the surface of the nanoparticle is catalyzing the reaction, and these nanoparticles are still more active than platinum by itself, then hopefully, with more research, we can figure out the minimum amount of platinum to add and still get the high activity, creating a more cost-effective catalyst.”

The findings depended on the advanced capabilities of IOS, where the researchers were able to run the experiments at gas pressures higher than what is usually possible in conventional XPS experiments.

“At IOS, we were able to follow changes in the composition and chemical state of the nanoparticles in real time during the real growth conditions,” said Waluyo.

“This fundamental work highlights the significant role of segregated nickel in forming the octahedral-shaped catalyst. We have achieved more insight into shape control of catalyst nanoparticles,” Peng said. “Our next step is to study catalytic properties of the faceted nanoparticles to understand the structure-property correlation.”