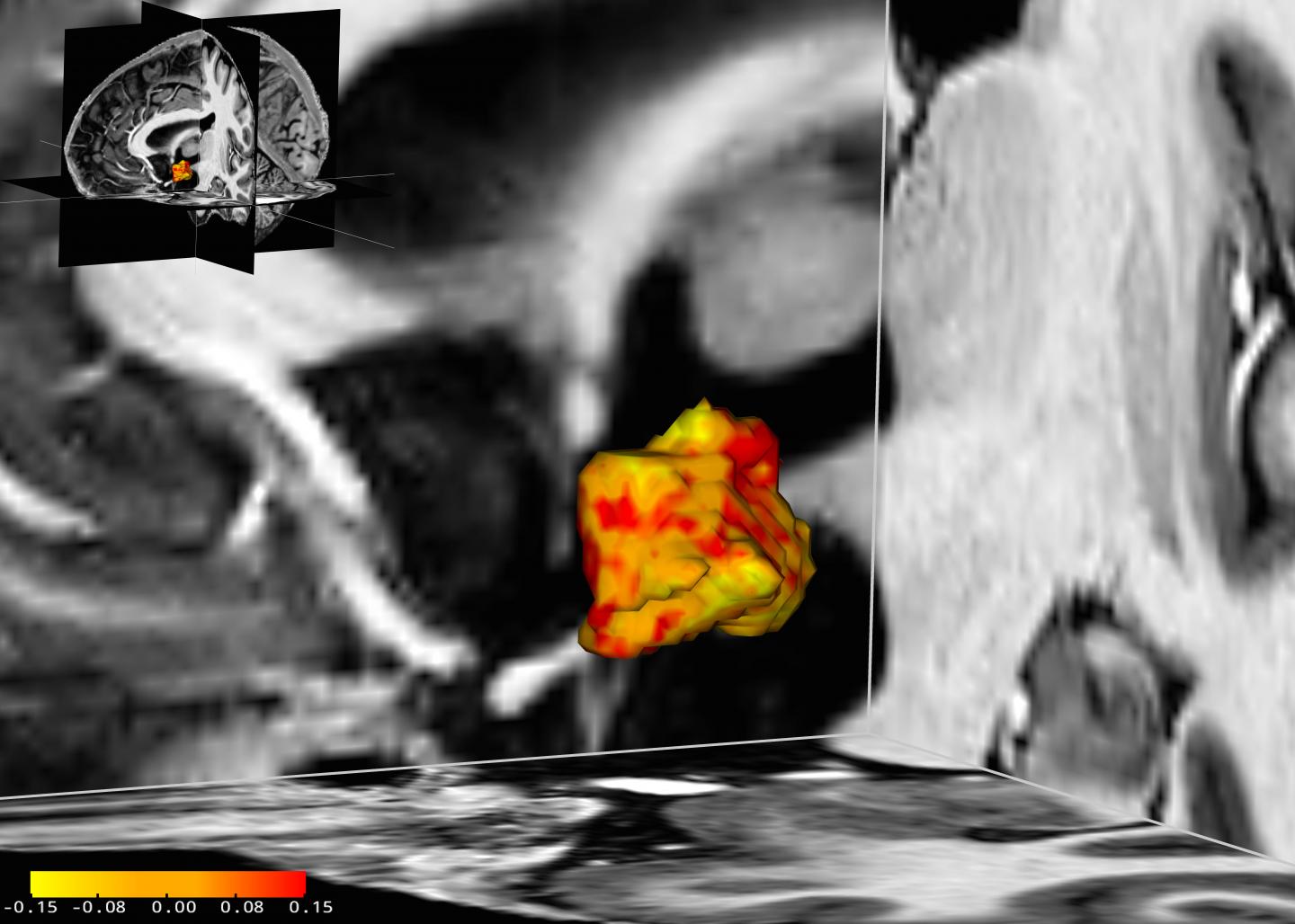 In those affected by depressive disorder, some regions of the hypothalamus are larger (red) compared to their healthy counterparts, where some are even smaller (yellow). Credit: Acta Psychiatrica Scandinavica

According to the World Health Organization (WHO) 322 million people worldwide were affected by depression in 2015–4.4 percent of the world’s population. In the search for the underlying causes of this widespread disorder, researchers have concluded that it could arise from predisposition combined with an individual’s environmental stress factors.

So far, it is known that people more predisposed to depression show a dysregulation of the endogenous stress response system, otherwise known as the hypothalamic-pituitary-adrenal axis (HPA axis), which is normally triggered when we are faced with a stressful situation. This response increases the amount of cortisol, providing the body with more energy when faced with a potential threat or challenge. Once the challenging situation has passed, several control mechanisms in the HPA axis normally ensure the system returns to a balanced state.

In people who suffer with depressive disorder or who are more predisposed, this is not the case. Instead, a malfunction of the feedback mechanism results in a stress response operating at full throttle, even when there is no apparent stressful situation. Until now, the underlying reason for this hyperactive stress response system and the role of the hypothalamus as its overall control unit has remained unclear.

In a recent study with 84 participants, scientists at the Max Planck Institute for Human Cognitive and Brain Sciences (MPI CBS) in Leipzig and the Department of Psychiatry and Psychotherapy of the University Clinic in Leipzig have revealed that in people with an affective disorder, the left hypothalamus was on average five per cent larger than that of their healthy counterparts. ‘We observed that this brain region is enlarged in people with depression as well as in those with bipolar disorder, two types of affective disorders’, says Stephanie Schindler, a PhD student at both research institutes involved in the study and first author of the underlying publication just published in the scientific journal Acta Psychiatrica Scandinavica. Furthermore, in one of the groups of participants with depression it was also revealed that the more severe the depression, the larger the hypothalamus was. Medication did not have any effect on the size of the hypothalamus.

These relations were found out using a high-resolution 7-Tesla MRI scanner. The severity of disorders was measured using standardised questionnaires and interviews.

Although studies have shown this brain structure to be more active in people with depression or bipolar disorder, it is not yet known what role a larger hypothalamus plays. ‘Higher activity could lead to structural changes and thus to a larger volume of the hypothalamus normally the size of a one cent coin’, says Stefan Geyer, one of the study’s principal investigators and head of the research group Anatomical Analysis of the Organization of the Human and Non-Human Primate Brain at MPI CBS.