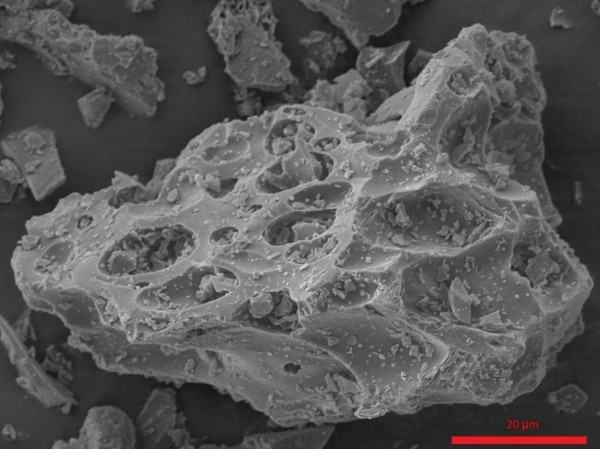 Image of an ash particle from the Mt. St. Helens volcanic eruption of 1980. A series of closely aligned images are used to construct a 3-D model of the particle. Due to the complexity of reconstruction, imaging alone cannot capture the whole particle. Photo credit: Mark Townley/UNH UIC.

New research from the University of New Hampshire has led to the development of a novel technique to determine the surface area and volume of small particles, the size of a grain of sand or smaller. Due to their tiny size, irregular shape and limited viewing angle, commonly used microscopic imaging techniques cannot always capture the whole object’s shape often leaving out valuable information that can be important in numerous areas of science, engineering and medicine.

The study, which was recently published in the journal Measurement Science and Technology, describes an inventive technique to mathematically estimate the extent of an object that is captured in 3-D models, and use the information to more accurately measure the entire object.

“Micro-scale 3D models are an important tool for many areas of science, but for most micro or nano-scale objects only a portion of the object can be seen in the field of view,” says Gopala Mulukutla, a research scientist in the Institute for the Study of Earth, Oceans and Space at UNH and the study’s lead author. “Due to the irregular shape of objects being studied, knowing the extent of the particle being imaged allows us to reasonably compute what was not seen in the model allowing for a more accurate assessment of properties such as surface area, and volume of the entire particle.”

The research was inspired by a NSF-funded study to understand the properties of volcanic ash collected from the 1980 eruption of the Mount Saint Helens volcano in the state of Washington. Ash from deadly eruptions, like this one, can spread far and wide and cause a host of issues related to health, air transportation, and even crop failure. For example, the eruption of Mount Tambora in Indonesia in 1816, resulted in what is referred to as “The Year Without a Summer” across the globe, causing unusually cold temperatures and devastating crop damage.

“Tiny volcanic ash particles enter the atmosphere and can be transported long distances causing all kinds of problems, from becoming an aviation hazard to affecting respiratory health for both humans and animals,” explains Mulukutla. “By using this mathematical approach, we can gain a better idea of what the particles look like, which will allow scientists to implement models that better predict movement of volcanic ash clouds of future eruptions.”

Part of a provisional patent filed by UNH Innovation, which advocates for, manages, and promotes UNH’s intellectual property, the technique has other practical applications. Mulukutla, whose research area is in hydrology and water quality, says it could be useful in developing models that simulate sediment transport in rivers and streams. The technique might also be helpful in medicine where, for example, new and innovative blood tests being developed require assessing the shape and properties of elongated blood droplets that can be challenging to capture.

For more information on licensing this patent-pending technology, contact unh.innovation@unh.edu.

The University of New Hampshire is a flagship research university that inspires innovation and transforms lives in our state, nation and world. More than 16,000 students from all 50 states and 71 countries engage with an award-winning faculty in top ranked programs in business, engineering, law, liberal arts and the sciences across more than 200 programs of study. UNH’s research portfolio includes partnerships with NASA, NOAA, NSF and NIH, receiving more than $100 million in competitive external funding every year to further explore and define the frontiers of land, sea and space.