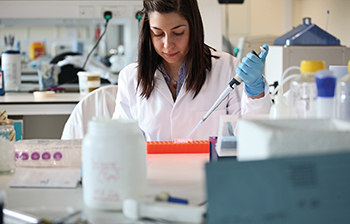 The University of Sheffield and Parkinson’s UK have launched a new £1 million virtual biotech company in the next stage[1] of a pioneering research programme to create new drugs for Parkinson’s.

In a partnership that is the first of its kind, Keapstone Therapeutics will combine world-leading research from the University with funding and expertise from the charity to help develop revolutionary drugs for Parkinson’s, which affects around 127,000 people in the UK.

Although similar partnerships between charities and research specialists have been formed in the past, this is the first time a charity has directly approached researchers to launch a spin-out company with the aim of advancing one particular research programme.

The creation of Keapstone Therapeutics is part of Parkinson’s UK’s new Virtual Biotech venture, formed to combat the lost opportunities in drug discovery and early clinical development caused by the changing pharma landscape. It allows the charity to work virtually – providing leadership and critical funding, in partnership with a range of other organisations that have the facilities and staff to carry out scientific work on a contract basis.

Keapstone is the first ‘single-asset’ spin-out company to be created in this way and it ensures that, if successful, the research is in the best possible position to receive investment – allowing immediate progress towards clinical trials. The structure of the set-up also means that Parkinson’s UK and The University of Sheffield will each retain a stake in any future developments.

Director of Research at Parkinson’s UK, Arthur Roach, said: “Due to the funding gap in early stage drug discovery, there are promising scientific breakthroughs for Parkinson’s happening every day that are not being picked up and developed by commercial companies.

“This major new programme of work will allow us to act in a similar way to a small biotech company. However, unlike a commercial company, our primary goal is the creation of new treatments to improve the lives of people with Parkinson’s, regardless of commercial considerations.

“Keapstone is our first step in this pioneering programme and it is a world-first in terms of its formation. By seeking early collaboration with a University in the creation of a spin-out biotech company, we will be able to investigate and develop potential Parkinson’s treatments with an intensity that is unprecedented for a charity.”

Keapstone Therapeutics will build on over a decade of research at the University’s Sheffield Institute for Translational Neuroscience (SITraN), where researchers have pinpointed a way to trigger a possible in-built defence system that helps protect brain cells from oxidative stress. This stress is caused by a damaging build-up of free-radicals and is found in the brain cells of people with Parkinson’s.

Dr Richard Mead from SITraN discovered a new class of compounds that can activate the brain cell defence system. Keapstone Therapeutics will now fund the chemistry specialists, Sygnature Discovery, to further develop these molecules, which could eventually become new drugs that can slow or stop the progression of Parkinson’s.

Dr Mead said: “We are very excited about this new partnership with Parkinson’s UK. It is a great opportunity for us to pursue a novel drug discovery program for Parkinson’s and other neurodegenerative conditions, such as motor neuron disease (MND).

“We will now progress these molecules through the next stage of drug development.”

Professor Dame Pamela Shaw, Director of SITraN, said: “We are very excited to have the opportunity to further our programme of work to develop new approaches for protecting neurons and slowing disease progression in Parkinson’s disease and MND, by designing drugs which boost the internal cellular defence mechanisms.

“Along with Parkinson’s UK, Keapstone Therapeutics will facilitate a step-change in the drug development programme emerging from the scientific and pre-clinical research within SITraN”.

Sarah Fulton Tindall, Director of Research and Innovation Services at the University of Sheffield, said: “We are delighted to be working with Parkinson’s UK to support this novel form of commercialisation. This potential therapy can benefit patients worldwide, and gives the University another exciting spin-out company led by our world-class academics."

Steve Ford, Chief Executive at Parkinson’s UK, said: “Parkinsons’ UK is delighted to be working with Sheffield University through the formation of Keapstone, to help unlock the potential of the very promising discoveries made by Dr Richard Mead and his team.

“For years we have worked to support and accelerate the progression of research discoveries from the lab into clinical trials, with the aim of developing new drugs that can be used to manage and treat Parkinson’s. The launch of Keapstone marks an exciting step change in our strategy, which will allow us greater involvement in research and more flexibility to progress promising leads.

“This extraordinary venture would not have been possible without our supporters and partners - and we’re looking forward to sharing the developments of this new project with them.”