Nearly five years ago, NASA and Lincoln Laboratory made history when the Lunar Laser Communication Demonstration (LLCD) used a pulsed laser beam to transmit data from a satellite orbiting the moon to Earth — more than 239,000 miles — at a record-breaking download speed of 622 megabits per second.

Now, researchers at Lincoln Laboratory are aiming to once again break new ground by applying the laser beam technology used in LLCD to underwater communications.

“Both our undersea effort and LLCD take advantage of very narrow laser beams to deliver the necessary energy to the partner terminal for high-rate communication,” says Stephen Conrad, a staff member in the Control and Autonomous Systems Engineering Group, who developed the pointing, acquisition, and tracking (PAT) algorithm for LLCD. “In regard to using narrow-beam technology, there is a great deal of similarity between the undersea effort and LLCD.”

However, undersea laser communication (lasercom) presents its own set of challenges. In the ocean, laser beams are hampered by significant absorption and scattering, which restrict both the distance the beam can travel and the data signaling rate. To address these problems, the Laboratory is developing narrow-beam optical communications that use a beam from one underwater vehicle pointed precisely at the receive terminal of a second underwater vehicle.

This technique contrasts with the more common undersea communication approach that sends the transmit beam over a wide angle but reduces the achievable range and data rate. “By demonstrating that we can successfully acquire and track narrow optical beams between two mobile vehicles, we have taken an important step toward proving the feasibility of the laboratory’s approach to achieving undersea communication that is 10,000 times more efficient than other modern approaches,” says Scott Hamilton, leader of the Optical Communications Technology Group, which is directing this R&D into undersea communication.

Most above-ground autonomous systems rely on the use of GPS for positioning and timing data; however, because GPS signals do not penetrate the surface of water, submerged vehicles must find other ways to obtain these important data. “Underwater vehicles rely on large, costly inertial navigation systems, which combine accelerometer, gyroscope, and compass data, as well as other data streams when available, to calculate position,” says Thomas Howe of the research team. “The position calculation is noise sensitive and can quickly accumulate errors of hundreds of meters when a vehicle is submerged for significant periods of time.” 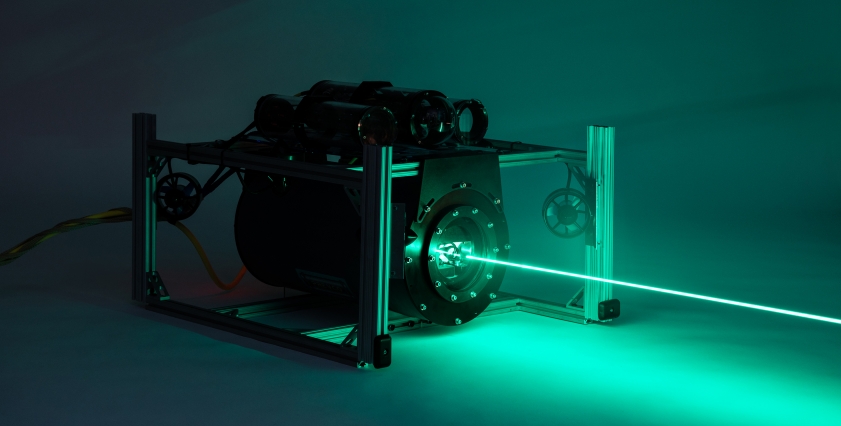 This positional uncertainty can make it difficult for an undersea terminal to locate and establish a link with incoming narrow optical beams. For this reason, “We implemented an acquisition scanning function that is used to quickly translate the beam over the uncertain region so that the companion terminal is able to detect the beam and actively lock on to keep it centered on the lasercom terminal’s acquisition and communications detector,” researcher Nicolas Hardy explains. Using this methodology, two vehicles can locate, track, and effectively establish a link, despite the independent movement of each vehicle underwater.

Once the two lasercom terminals have locked onto each other and are communicating, the relative position between the two vehicles can be determined very precisely by using wide bandwidth signaling features in the communications waveform. With this method, the relative bearing and range between vehicles can be known precisely, to within a few centimeters, explains Howe, who worked on the undersea vehicles’ controls.

To test their underwater optical communications capability, six members of the team recently completed a demonstration of precision beam pointing and fast acquisition between two moving vehicles in the Boston Sports Club pool in Lexington, Mass. Their tests proved that two underwater vehicles could search for and locate each other in the pool within one second. Once linked, the vehicles could potentially use their established link to transmit hundreds of gigabytes of data in one session.

This summer, the team is traveling to regional field sites to demonstrate this new optical communications capability to U.S. Navy stakeholders. One demonstration will involve underwater communications between two vehicles in an ocean environment — similar to prior testing that the Laboratory undertook at the Naval Undersea Warfare Center in Newport, Rhode Island, in 2016. The team is planning a second exercise to demonstrate communications from above the surface of the water to an underwater vehicle — a proposition that has previously proven to be nearly impossible.

In addition, the ability to move data at megabit-to gigabit-per-second transfer rates over distances that vary from tens of meters in turbid waters to hundreds of meters in clear ocean waters will enable undersea system applications that the laboratory is exploring.