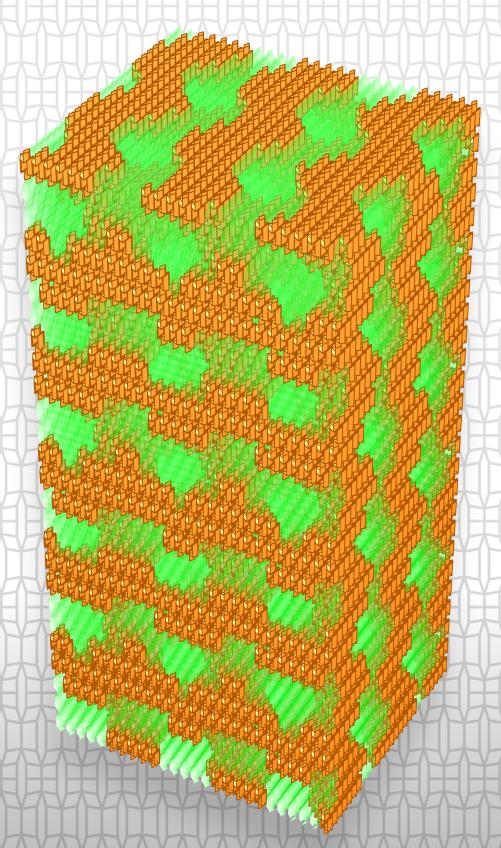 This image shows how two types of origami-inspired materials can be woven into a single structure. The orange and (semi-transparent) green portions each have their own distinct properties and allow the composite to exhibit unique behavior not possible with just the one type of building-blocks. Credit: Nan Yang, Jesse L. Silverberg

Inspired by the fun of playing with Legos, an international team of researchers from Tianjin University of Technology and Harvard University have used the idea of assembling building-blocks to make the promise of next-generation materials a practical reality.

Publishing online in the journal Proceedings of the National Academy of Sciences Mar, 20, Nan Yang from the Laboratory for the Design and Intelligent Control of Advanced Mechatronical Systems and Jesse Silverberg from the Wyss Institute for Biologically Inspired Engineering removed a key bottleneck slowing down the translation of scientific progress to commercial applications.

Silverberg described it like this: “Metamaterials are driving a revolution in material science. The current approach of building every-day stuff turns out to be limited because the materials we work with have a relatively narrow range of properties and capabilities.”

Metamaterials go beyond what’s found in nature by assembling simple elements into repeating patterns. At large scales, these smaller components influence the larger construction in unusual ways. Yang noted “The variety of applications is growing. Today we see mechanical metamaterials used to shape the flow of vibrational waves like earthquakes to protect buildings. Tomorrow, who knows what will be next.”

The researchers, however, were concerned that these discoveries haven’t been moving from the lab to the market fast enough. A challenge they noted was the time and difficulty of designing for real-world applications.

A few years ago, origami – the art of paper-folding – was recognized for its ability to rapidly convert flat sheets into 3D patterns with unusual metamaterial properties. “While easy to fold, the time required to find good designs for practical problems is often too costly,” said Silverberg. “Suppose you wanted a mechanical metamaterial to absorb impact during a car crash. What’s the best design for that? And even if you find a good folding pattern, does it even fit with the car’s chassis?”

Both Yang and Silverberg have young children. They described their ‘ah-ha’ moment like this: “We were working late one night over Skype and we realized the solution was literally on the floor in front of us. What if we could build metamaterials like our kids build with Legos?”

This insight led the researchers to design a standard set of building-blocks. “We started designing a basic unit, kind of like the classic 2-by-4 Lego brick, but instead of making them in different colors, we gave them different mechanical properties. A stiff one, a soft one, etc,” said Silverberg. Once designed, the team was able to create larger and more elaborate structures the same way their children were creating multi-colored ships and robots.

As examples, the researchers showed how to assemble two different types of mechanical `cloaking materials.’ They also gave examples of how a pre-determined set of properties can be engineered into arbitrary 3D structures, a highly elusive challenge since the beginning of metamaterial research.

Yang went on, “Now that have a basic strategy, we’re working out the design for even more ‘bricks’ and methods to rapidly assemble them.” Silverberg added, “Looking ahead, we foresee tools that allow anyone with a computer to easily design complex metamaterials.”