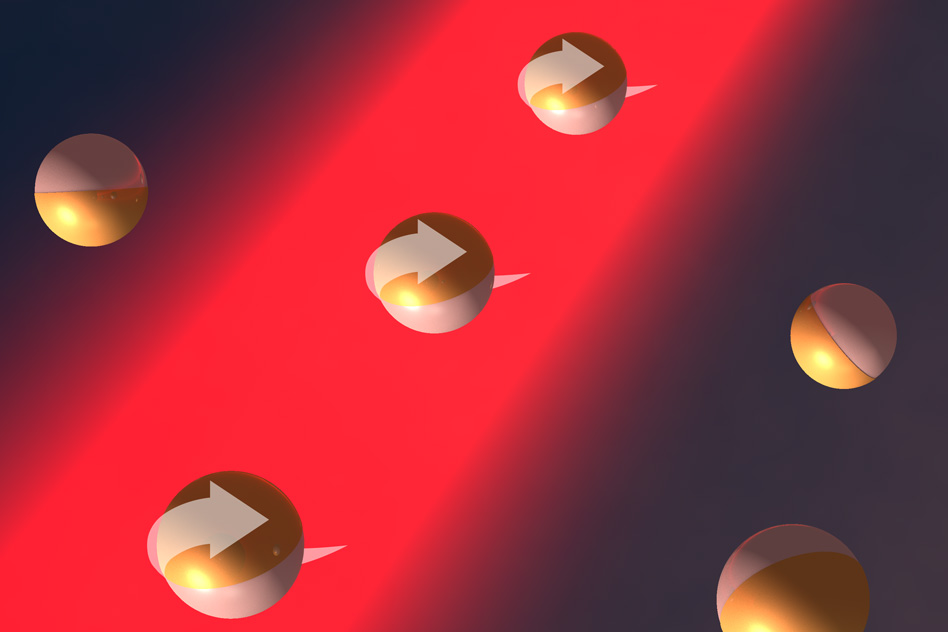 Researchers have created in simulations the first system in which can be manipulated by a beam of ordinary light rather than the expensive specialized light sources required by other systems. Image: Christine Daniloff/MIT

Researchers created the first system where light can manipulate particles of different sizes ranging from roughly molecule to as a large as bacterium.

The scientists, led by a team from the Massachusetts Institute of Technology, used simulations to manipulate matter with light instead of using sophisticated and expensive laser beam by creating simulated asymmetrical particles—called Janus particles—that are a micrometer in diameter and composed of a silica core coated on side with a thin layer of gold.

When the particles were exposed to a beam of light, the two-sided configuration caused an interaction that shifted the axes of symmetry relative to the orientation of the beam.

The interaction creates forces setting the particle spinning uniformly while multiple particles can all be affected at once by the same beam. This causes the rate of spin to shift with a change of the light’s color.

According to the scientists, the same kind of system could be applied to producing different kinds of manipulations including moving the positions of the particles.

The system could also be applied to moving particles around inside the body for medical treatments and optically based nanomachinery.

Other applications include biological uses, where nanoparticles may be moving in a complex and changing environment that would distort and scatter the beams needed for other kinds of particle manipulation.

“Because our approach does not require shaping of the light field, a single beam of light can simultaneously actuate a large number of particles,” Ognjen Ilic, Ph.D., said in a statement. “Achieving this type of behavior would be of considerable interest to the community of scientists studying optical manipulation of nanoparticles and molecular machines.”

These findings were published in the journal Science Advances.