Engineers at NASA’s Johnson Space Center in Houston used light waves to align the James Webb Space Telescope’s mirror segments to each other, so they act like a single, monolithic mirror in the cryogenic cold of the center’s iconic Chamber A.

Part of the Webb telescope’s ongoing cryogenic testing in Chamber A at Johnson includes aligning, or “phasing,” the telescope’s 18 hexagonally shaped primary mirror segments so they function as a single 6.5-meter mirror. All of these segments must have the correct position and correct curvature; otherwise, the telescope will not be able to accurately focus on its celestial targets. 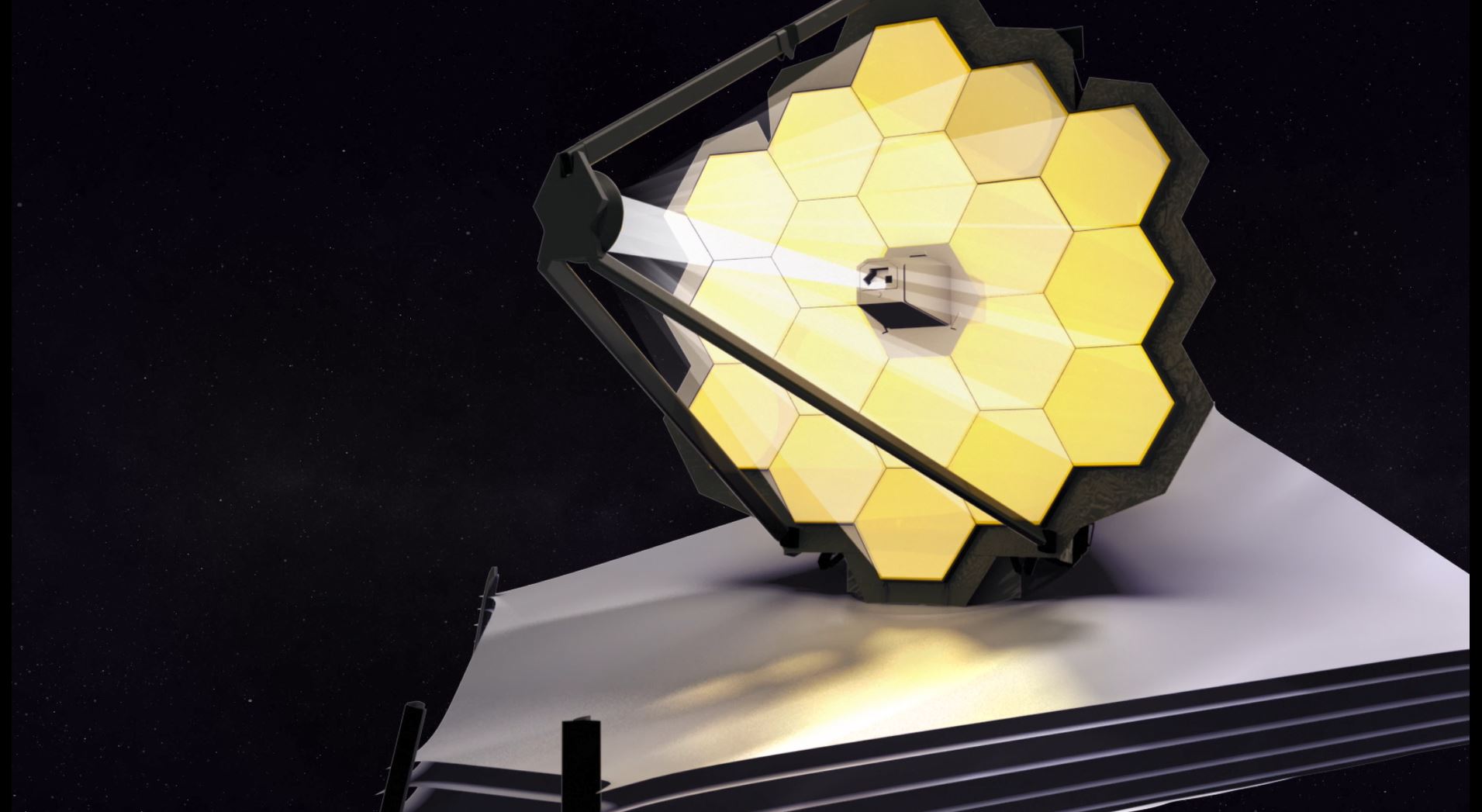 Artist rending showing light reflecting off of the primary and secondary mirrors of NASA’s James Webb Space Telescope, after it has deployed in space. Image: NASA/Mike McClare

The interferometer splits the laser light into two separate waves. One of these waves goes through a lens and reflects off the primary mirror; the other wave acts as a reference. The reflected wave interferes with (meets) the reference wave, and engineers analyze the combined wave that results from that interference. “By analyzing the interference signal, engineers determine the mirror shape and the alignment of the mirrors,” explains Feinberg.

The actuators on each mirror segment are capable of extremely minute movements, which allow engineers to align the entire primary mirror by finely adjusting each mirror segment. “They can move in steps that are a fraction of a wavelength of light, or about 1/10,000th the diameter of a human hair,” explains Feinberg.

These actuators can also be used to precisely reshape each mirror segment to ensure they all match up once aligned. The ability to change the mirror alignment and shape is critical because the mirror must be unfolded from its unaligned stowed position when the telescope deploys. This test verifies the actuators have enough range of movement once they are in space, at their operational temperature of about 40 K (or about minus 388 degrees Fahrenheit/minus 233 degrees Celsius), to put the telescope’s primary mirror into its correct shape so it can accurately survey the universe.

With the mirrors aligned, engineers test Webb’s optics using a piece of support equipment called the ASPA, a nested acronym that means “AOS Source Plate Assembly.” The ASPA is a piece of test hardware that sits atop Webb’s Aft Optics Subsystem (AOS) and sends test laser light into and out of the telescope, thus acting like a source of artificial starlight. The AOS contains the telescope’s tertiary and fine-steering mirrors.

During one part of the optical test, called the “half-pass” test, the ASPA feeds laser light straight into the AOS, where it is directed by the tertiary and fine-steering mirrors to Webb’s four science instruments, which sit in a compartment directly behind the primary mirror. This test lets engineers make measurements of the optics inside the AOS to verify that Webb’s tertiary mirror, which is immovable, is correctly aligned to the instruments.

In another part of the test, called the “pass-and-a-half” test, light travels in a reverse path through the telescope optics. The light is again fed into the system from the ASPA, but upwards this time, to the secondary mirror. The secondary mirror reflects the light down to the primary mirror, which sends it back up to the top of Chamber A. Mirrors at the top of the chamber send the light back down to the telescope again, where it follows its normal course through the telescope to the instruments, but this time bypassing the ASPA test equipment.

“This verifies not only the alignment of the primary mirror itself but also the alignment of the whole telescope — the primary mirror, secondary mirror, and the tertiary and fine-steering mirrors inside the AOS,” says Paul Geithner, the deputy project manager — technical for Webb telescope at Goddard. “Taken together, the half-pass and pass-and-a-half tests demonstrate that everything is aligned to everything else.”

Because the ASPA is ground test hardware, it will be removed from the telescope once the cryogenic testing at Johnson is complete.

The cryogenic vacuum environment of Chamber A simulates the frigid space environment where Webb will operate, and where it will collect data of never-before-observed portions of the universe. Verifying the entire telescope, including its optics and instruments, works correctly in this cold environment ensures the telescope will work correctly in space. The telescope and its instruments are designed to operate cold, so they must be cold to be aligned and to properly function.

The James Webb Space Telescope is the scientific successor to NASA’s Hubble Space Telescope. It will be the most powerful space telescope ever built. It was assembled in a Class 10,000 cleanroom at NASA’s Goddard Space Flight Center. Webb is an international project led by NASA with its partners, ESA (European Space Agency) and the Canadian Space Agency.