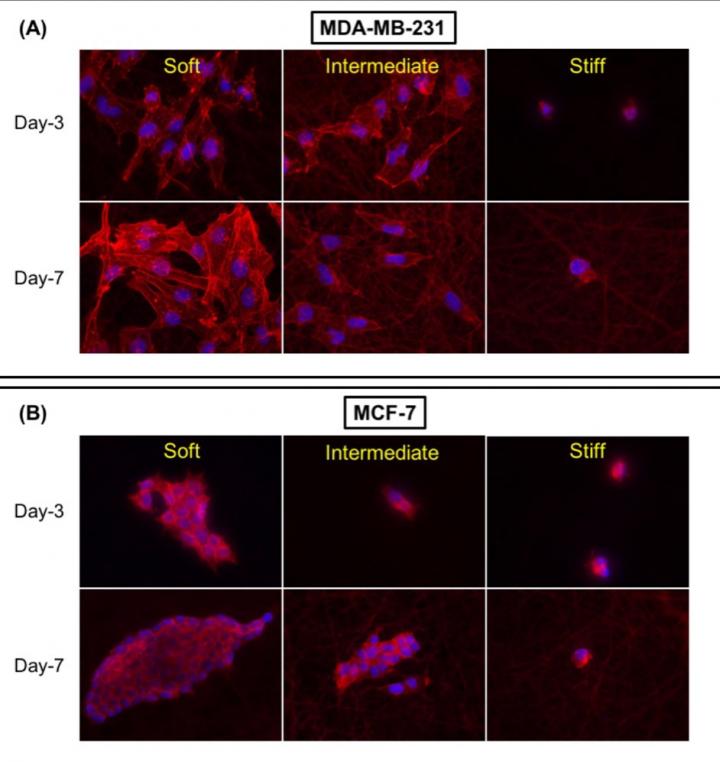 (A) MDA-MB-231 (aggressive breast cancer cells) form epithelial-like structures (structure of the cells that incline toward to healthy tissues) with reduced aggressiveness on softer surfaces, but with increase in stiffness/rigidity the cells become more aggressive, lose their capabilities to form colony (intermediate) and with stiff surfaces they tend to become more aggressive as the area of the cell decreases. (B) MCF-7 (localized breast cancer cells) form colonies and are less aggressive on softer surfaces, while on intermediate surfaces, the size of the colony reduces, the cells become comparatively aggressive and on stiff surfaces, they lose the capacity to form colonies and are highly aggressive.

Breast cancer is the most commonly diagnosed cancer in women — one in eight (12.4 percent) in the U.S. will be diagnosed with it. Invasive breast cancer is dangerous for two reasons: It can aggressively spread to other organs in the body, and it is likely to recur. While treatable in the early stages via surgery or chemotherapy, as the disease progresses, the chances of recovery decrease exponentially.

During the 62nd Biophysical Society Annual Meeting, held Feb. 17-21, in San Francisco, California, Deep Parikh, a doctoral candidate at Stevens Institute of Technology, will present his work exploring the role physical changes within a cancer cells’ local environment play in the aggressiveness of breast cancer.

“Prior attempts to clarify the interactions between breast cancer cells and the local environment … were mainly done on artificial smooth surfaces … and yield misleading indications,” Parikh said. “I’m studying how the cancerous microenvironment — especially the physical attributes of tissue stiffness and rigidity — controls cancer progression.”

During tumor development, “the local environment undergoes significant chemical and physical alterations that are regulated by both cancer cells and the cells surrounding the tumor,” Parikh said.

Based on clinical observations, an increase of tissue stiffness and rigidity is among the most profound of these physical changes. “More importantly, clinical data suggests that increasing stiffness may lead to tumor aggressiveness and cause it to spread to other organs,” Parikh said.

As a better way to explore the role of tissue stiffness in cancer aggressiveness — independent of the chemical alterations — Parikh and colleagues developed a biomimetic platform that mimics the stiffness of the local environment from healthy “soft” breast tissue to cancerous “stiff” tissue.

“Our platform is easy to manipulate and can be tuned to accommodate a range of stiffness that corresponds to the gradual changes that occur during cancer development,” Parikh said. “It allows us to encode the complex correlation between tissue stiffness and cancer development.”

Culturing breast cancer cells on surfaces of different stiffness resulted in cells with different biological structures. “The cells inclined toward being more aggressive — metastatic (spreading to other organs) — as stiffness increased,” Parikh said. “Strikingly, the data obtained after three and seven days’ culture was significantly different than previous studies carried out for less than 24 hours. Also, with increased stiffness the drug resistance of the breast cancer cells increased — which suggests that drugs designed to target merely at a cellular level are not enough.”

This new approach to cancer therapeutics offers significant promise for future drug development. “Developing drugs that can potentially prevent an increase in stiffness can most likely stop the spread of cancer,” Parikh said. “Localizing it would allow it to be easily removed using surgical techniques.”