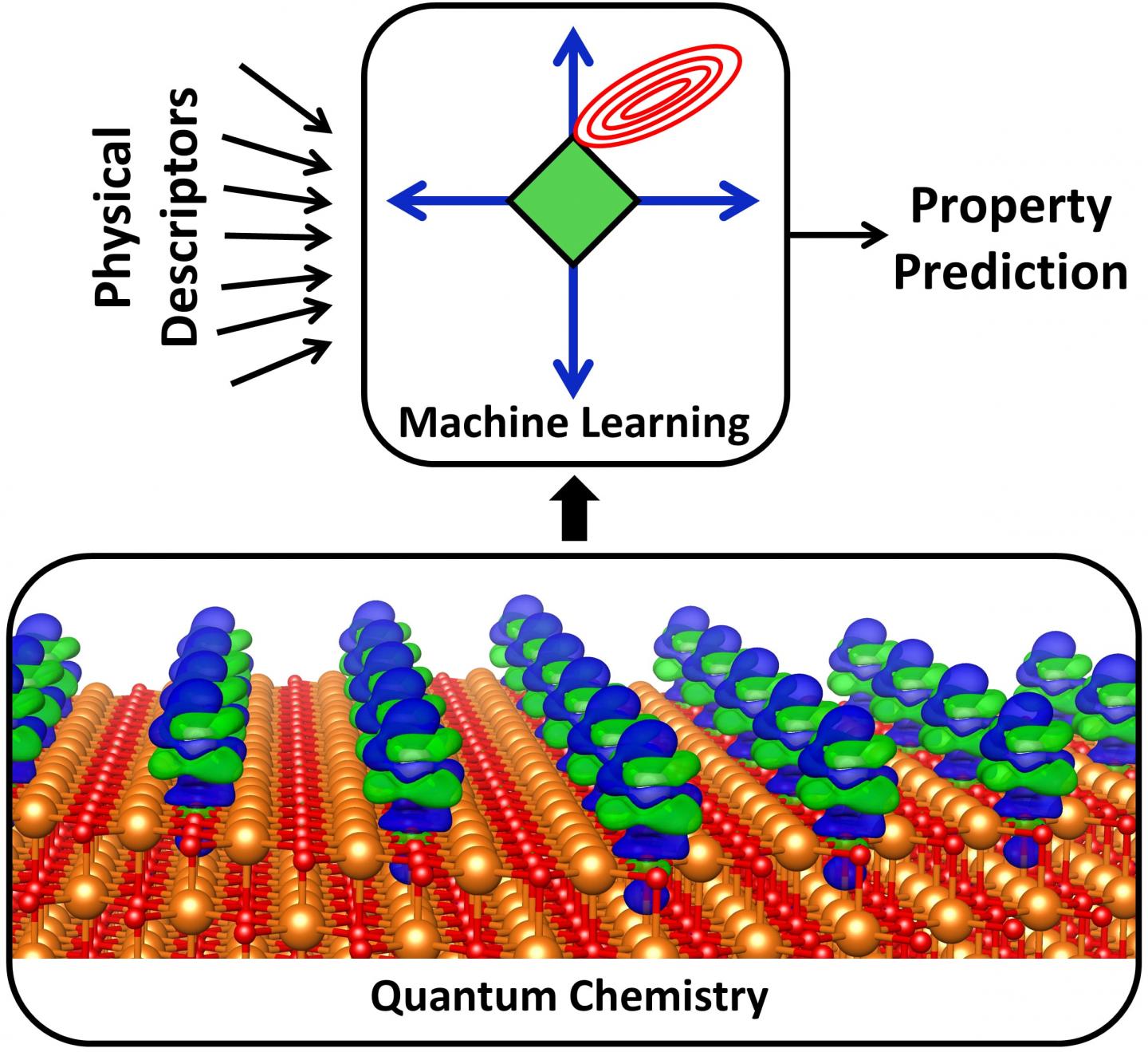 A quantum chemical simulation (lower panel) depicts the charge transfer (blue/green) between metal atoms and an underlying support (orange). This is but one description of a catalyst’s physical behavior, and researchers created a massive database by calculating 330,000 such descriptions for each of many catalysts. Machine learning was used (upper panel) to search the database for hidden patterns that designers can use to make cheaper, more efficient catalysts. Credit: Tom Senftle/Rice University

Researchers have developed a new method combing machine learning and quantum chemistry that could result in catalysts that are quicker and less expensive to design.

A team from Rice University and Penn State University have found hidden correlations that could improve the design process and allow scientists to forego traditional laboratory testing to find the best metals and materials to use for catalysts, which is both time-consuming and expensive.

“Large amounts of data are generated in computational catalysis, and the field is starting to realize that data science tools can be extremely valuable for sifting through high-volume data to look for fundamental correlations that we might otherwise miss,” Thomas Senftle, an assistant professor in chemical and biomolecular engineering from Rice, said in a statement. “That’s what this paper was really about. We combined well-established tools for data generation and analysis in a way that allowed us to look for correlations we wouldn’t otherwise have noticed.”

The researchers began by using the density functional theory to calculate the binding strengths of single atoms of several different types of metals with a range of metal oxide substrates.

“The binding energy between the metal and substrate is of particular interest because the stronger the bond, the less likely the metal atom is to dislodge,” Michael Janik, co-author and professor of chemical engineering at Penn State, said. “If we can control that binding energy, we can tailor the size distribution of these metal particles, and that, in turn, is going to impact the overall reaction that they can catalyze.”

The team cataloged approximately 330,000 additional properties for each of the metal-substrate combinations, including factors like oxide formation energy, coordination number, alloy formation energy and ionization energy.

“The machine learning algorithm looks for the combinations of those descriptors that correlate with the observed data on binding energies,” A.S.M. Jonayat, lead author and graduate research assistant at Penn State, said. “It basically allows us to ask, ‘Of all of these descriptors, how can we find the ones that correlate with the observed behavior in which we’re interested’?”

According to the researchers, identifying correlations could streamline catalyst design by making it possible to predict how materials will behave prior to time-consuming and expensive laboratory testing.

The team’s next plan is to build on the complexity of the simulations.

“Here we were looking at the interactions between the metals and the supports in a pristine environment with no water molecules or impurities of any kind,” Senftle said. “In reality, catalysts are used in very complicated reaction environments, and we’d like to examine how these trends change in those settings.

“For example, if this were an aqueous environment, water or dissociated water would likely adsorb on the surface,” Senftle added. “Those are going to impact the interaction, because now you have another player that is sharing the electron density and sharing the surface oxygen.”

The study was published in Nature Catalysis.