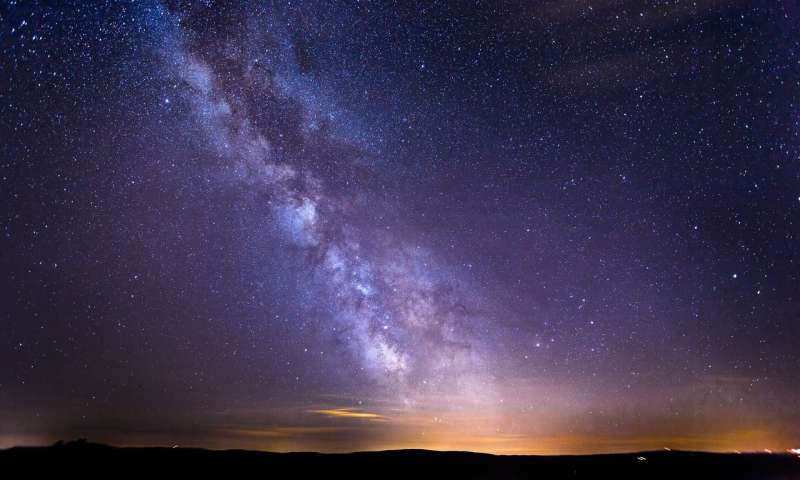 Are magnetic fields an important guiding force for gas accreting to a supermassive black hole (SMBH) like the one that our Milky Way galaxy hosts? The role of magnetic fields in gas accretion is little understood, and trying to observe it has been challenging to astronomers. Researchers at the Academia Sinica Institute of Astronomy and Astrophysics (ASIAA), Taiwan, led by Dr. Pei-Ying Hsieh, have obtained a good measurement by using the instruments on the James Clerk Maxwell Telescope (JCMT). Their result provides clear evidence that the orientation of the magnetic field is in alignment with the molecular torus and ionized streamers rotating with respect to Sagittarius A*—the black hole at the center of the Milky Way. The findings are published in Astrophysical Journal in 2018 August.

Sagittarius A* (Sgr A*), being the nearest SMBH to Earth, has been targeted by many scientists to understand the nature of gas accretion in recent decades. Observing gas accretion onto SMBHs is critical to understanding how they release such tremendous energy.

The circumnuclear disk (CND) is a molecular torus rotating with respect to Sgr A*, within which are ionized gas streamers called mini-spirals (also called Sgr A West) filling the molecular cavity. The mini-spiral is hypothesized to originate from the inner edge of the CND. The CND, being the closest “food reservoir” of Sgr A*, is therefore critical to understanding the feeding of Sgr A*. However, looking for the physical evidence to connect the CND and the mini-spiral has puzzled astronomers since they were discovered 35 years ago.

Intensive measurements of dynamical movements orbiting Sgr A* have been conducted in recent decades, but its magnetic field has not been widely studied. This is solely because the weak polarized signal generated by the magnetic field from dust emission is difficult to measure. However, the magnetic field is expected to be important for material orbiting within and around the CND as the magnetic stress acting on the rotating disk can exert a torque to extract angular momentum from rotating gas, and thus drive gas inflows. Additionally, the magnetic tension force can also pull the gas back from the black hole. Taking advantage of the excellent atmospheric conditions of Mauna Kea at 4,000 meters, and the large aperture size of the JCMT (15 m in diameter), the submillimeter polarization experiments were successfully obtained at the galactic center to understand the role of the magnetic field.

The astronomers utilized the dust polarization data obtained by the JCMT-SCUPOL instrument to image the orientation of the magnetic field. A detailed comparison with higher-resolution interferometric maps from the Submillimeter Array (SMA) reveals that the magnetic field aligns with the CND. Moreover, the innermost observed magnetic field lines also appear to trace and align with the mini-spiral coherently. This is the first attempt to reveal the footprint of inflow linking the CND and the mini-spiral since they were discovered 35 years ago. The comparison of the model and data reinforces the key idea that the CND and the mini-spiral can be treated as a coherent inflow system.