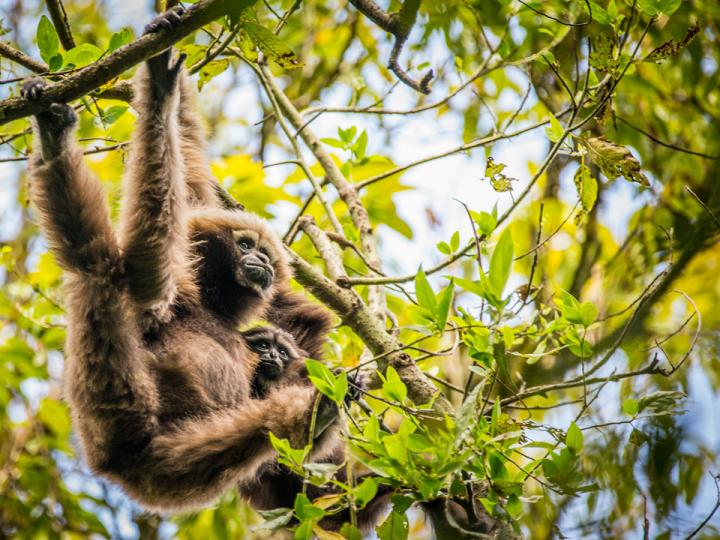 As more of Southeast Asia’s natural forests are cleared and converted into plantations for growing oil palm, rubber and other tree crops, a Duke University-led study finds that 42 percent of species endemic to the region’s forests face a much higher risk of extinction from habitat loss than previously thought.

More than 200 of the mammal, bird and amphibian species that were newly identified as being at high risk by the study are not currently listed as threatened or endangered by the International Union for the Conservation of Nature (IUCN).

“Many of these species have alarmingly small ranges that make them extremely vulnerable,” said Binbin Li, a doctoral student at Duke’s Nicholas School of the Environment, who led the study. “We may lose them before we are even able to get enough data to officially list them as threatened.”

Li and her team used newly available remote-sensing data to identify the unlisted species and their habitats, most of which are located in remote montane forests that snake across national borders in a region framed by eastern India, Singapore and China’s Yunnan Province.

Twenty-eight bird species, 147 amphibian species, and 42 mammal species were identified as being at high risk, despite currently not being listed as threatened or endangered by the IUCN. Scientists often refer to these unlisted species as being “Data Deficient,” because knowledge about their numbers and geographic distribution has historically been spotty and incomplete.

The scientists published their findings Aug. 3 in the peer-reviewed, open-access journal PLOS ONE.

By comparing the new information gleaned from remote sensing with maps of natural forests within national parks, preserves and other conservation areas in the region, the new study reveals that nearly 40 percent of the species likely have less than 10 percent of their habitats protected from future development or deforestation.

“And more than a quarter of the Data Deficient species have no coverage from protected areas at all,” Li said.

Many of the unprotected habitats cross national borders, she noted. This means increased international cooperation — including the creation of transboundary protected areas in biodiversity hot spots such as the Annamite Range of Vietnam and Laos — will be vital to the species’ survival.

Production of agricultural tree crops such as rubber and oil palm has expanded dramatically across mainland Southeast Asia in recent years.

“More than 56 percent of the world’s rubber and 39 percent of its palm oil are now produced in Southeast Asia, much of it on land that formerly was natural forest,” Li said. “Compared to the lush and diverse natural forest, few species can thrive in these green deserts.”

Increased use of remote-sensing technologies could help scientists and governments better identify which remaining natural forests should be made a conservation priority, said Stuart L. Pimm, Doris Duke Professor of Conservation Ecology at Duke, who co-authored the study.

“Without access to the new and frequently updated information remote sensing provides, between 20 percent and 40 percent of our current conservation priority areas could turn out to be a waste of effort because there are no forests, or natural forests, in them,” Pimm said.

“Remote-sensing technologies add a valuable new tool to our conservation toolbox,” he said. “They give us a much more accurate and up-to-date method for evaluating species’ threat levels — especially for unlisted endemic species such as these, which have largely been neglected in our conservation agenda.”