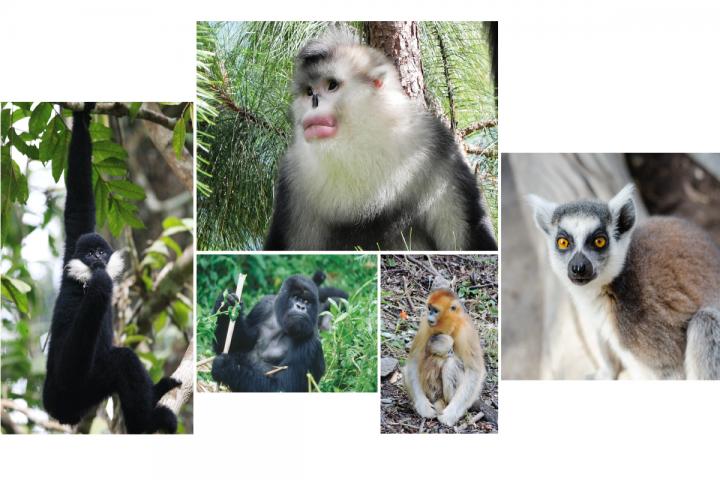 A report in the journal Science Advances details the grim realities facing a majority of the nonhuman primates in the world – the apes, monkeys, tarsiers, lemurs and lorises inhabiting ever-shrinking forests across the planet. The review is the most comprehensive conducted so far, the researchers say, and the picture it paints is dire.

“Alarmingly, about 60 percent of primate species are now threatened with extinction and about 75 percent have declining populations,” the authors wrote.

“This truly is the eleventh hour for many of these creatures,” said University of Illinois anthropology professor Paul Garber, who co-led the study with Alejandro Estrada of the National Autonomous University of Mexico. “Several species of lemurs, monkeys and apes – such as the ring-tailed lemur, Udzunga red colobus monkey, Yunnan snub-nosed monkey, white-headed langur and Grauer’s gorilla – are down to a population of a few thousand individuals. In the case of the Hainan gibbon, a species of ape in China, there are fewer than 30 animals left.”

Another critically endangered ape, the Sumatran orangutan, lost 60 percent of its habitat between 1985 and 2007, Garber said.

These species face a host of threats, from hunting, the illegal pet trade and habitat loss as humans continue to log tropical forests, build roads and mine “in needlessly destructive and unsustainable ways,” Garber said. “These primates cling to life in the forests of countries such as China, Madagascar, Indonesia, Tanzania and the Democratic Republic of Congo,” he said.

“Sadly, in the next 25 years, many of these primate species will disappear unless we make conservation a global priority,” he said. “This, by itself, would be a tragic loss. Now, consider the hundreds of other species facing a similar fate around the world, and you get a sense of what’s truly at stake.”

Just four countries – Brazil, Indonesia, Madagascar and the Democratic Republic of Congo – host two-thirds of all species of primates, the researchers report, making these countries obvious targets for measures to halt – and perhaps even reverse – the global primate extinction trend.

Habitat loss as the result of road building, mining, logging and agriculture, along with hunting and illegal trade in animals and animal parts, is often tied to high rates of population growth and the poverty of communities living nearby, Garber said.

“Addressing local poverty and easing population growth is a necessary component of primate conservation,” he said. “Building economies based on the preservation of forests and their primate inhabitants, and broadening educational opportunities for women would begin to address some of the greatest threats to these animals.”

Of all the threats, however, the biggest is humanity’s swelling agricultural footprint, Garber said.

“Agricultural practices are disrupting and destroying vital habitat for 76 percent of all primate species on the planet,” he said. “In particular, palm oil production, the production of soy and rubber, logging and livestock farming and ranching are wiping out millions of hectares of forest.”

Mining and drilling for minerals and fossil fuels add to the long list of assaults on the world’s forests and their primate inhabitants, he said.

“We have one last opportunity to greatly reduce or even eliminate the human threats to primates and their habitats, to guide conservation efforts, and to raise worldwide awareness of their predicament,” the authors wrote. “Primates are critically important to humanity. After all, they are our closest living biological relatives.”