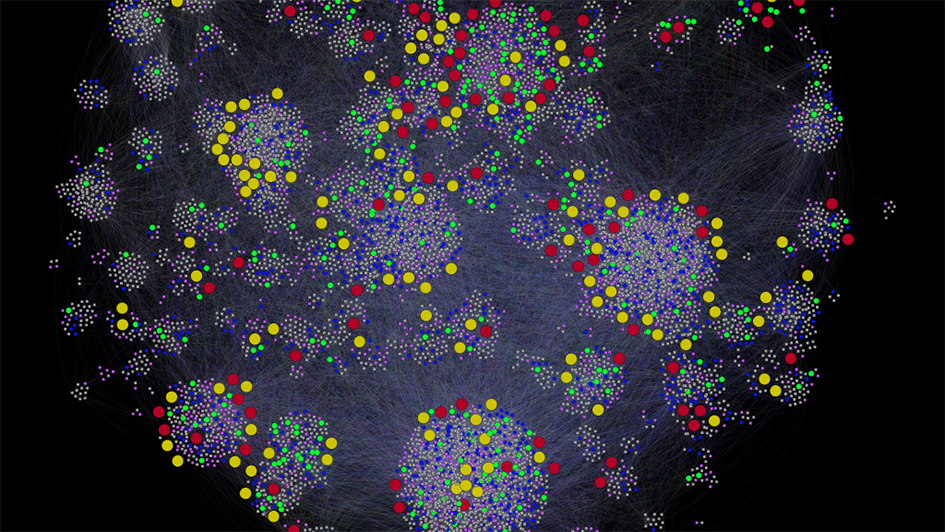 Scientists have created a map of all 1,578 licensed drugs and their mechanisms of action – as a means of identifying ‘uncharted waters’ in the search for future treatments.

Their analysis of drugs licensed through the Food and Drug Administration reveals that 667 separate proteins in the human body have had drugs developed against them – just an estimated 3.5% of the 20,000 human proteins.

And as many as 70% of all targeted drugs created so far work by acting on just four families of proteins – leaving vast swathes of human biology untouched by drug discovery programmes.

The study is the most comprehensive analysis of existing drug treatments across all diseases ever conducted. It was jointly led by scientists at The Institute of Cancer Research, London, which also funded the research.

The new map reveals areas where human genes and the proteins they encode could be promising targets for new treatments – and could also be used to identify where a treatment for one disease could be effective against another.

The new data, published in a paper in the journal Nature Reviews Drug Discovery, could be used to improve treatments for all human aliments – as diverse as cancer, mental illness, chronic pain and infectious disease.

Scientists brought together vast amounts of information from huge datasets including the canSAR database at the ICR, the ChEMBL database from the European Bioinformatics Institute (EMBL-EBI) in Cambridge and the University of New Mexico’s DrugCentral database.

They matched each drug with prescribing information and data from published scientific papers, and built up a comprehensive picture of how existing medicines work – and where the gaps and opportunities for the future lie.

The researchers discovered that there are 667 unique human proteins targeted by existing approved drugs, and identified a further 189 drug targets in organisms that are harmful to humans, such as bacteria, viruses and parasites.

On average they found there were two drugs for every target in humans – but that a handful of proteins were targeted by many different drugs, such as the glucocorticoid receptor, which is the target of 61 anti-inflammatory drugs.

Cancer was found to be the most innovative disease area, with the greatest growth in ‘first-in-class’ drugs – those that use a new and unique mode of action.

Using complex ‘Big Data’ analytical techniques, the researchers identified four very frequently ‘drugged’ families of proteins – accounting for 43% of all drug targets, and acting as targets for 70% of all approved small-molecular drugs.

The new map of drugs can now be used to identify other proteins with similar properties to these most heavily drugged families – which might be potentially exciting treatment targets for diseases such as cancer.

And bringing together complex data from multiple sources within the drug map could predict the best combinations of drugs to give. Targeting two proteins which behave in a similar way is unlikely to be effective against diseases such as cancer, whereas targeting proteins with very different functions could be much more successful.

Study co-leader Dr Bissan Al-Lazikani, Head of Data Science at the ICR, said: “Our new study provides a comprehensive map of the current state of medicines for human disease. It identifies areas where drug discovery has been a spectacular success, others where there are major gaps in our armoury of medicines, and opportunities for the future in the form of promising targets and potential drug combinations.

“By revealing the uncharted waters of drug discovery, it will provide a clear pointer for future exploration and innovation.”

Professor Paul Workman, Chief Executive of the ICR, said: “We need to do more to innovate in drug discovery if we are really going to tackle the major medical challenges we face, such as cancer’s ability to evolve drug resistance in response to treatment.

“But to help direct future efforts in drug discovery, we first need a very accurate and comprehensive picture of the targets of the medicines that have been created so far, what is currently working, and most importantly where there is the greatest potential for the future.

“This new map of drugs, created through the latest computational analytical technologies, will enhance our ability to use rational, data-driven approaches to identify the most promising future targets and treatment combinations for the next generation of cancer and other diseases.”