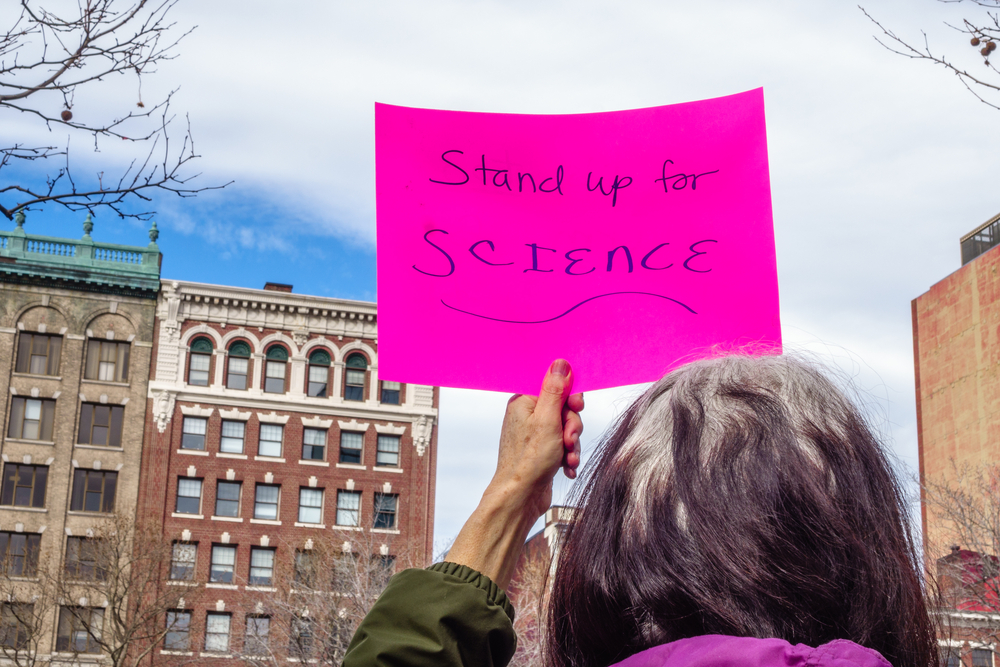 This Earth Day, thousands are expected to take a stand for science—gathering in Washington D.C. and in over 400 locations around the world as part of the March for Science.

However, despite what may seem like a head-on collision between science and politics, officials involved in the April 22 event do not believe the march should be partisan.

Rush Holt, Ph.D., CEO of the American Association for the Advancement of Science (AAAS), said the march—which was organized in partnership with the AAAS, the American Geophysical Union, the National Center for Science Education and other science-based organizations—is not about partisan politics, but rather about advocating for the advancement of science.

“I’d say the organizers of the march have taken great pain to say that it is not partisan,” Holt said during an April 19 press conference about the upcoming event. “It is not about any particular public official or political figure or particular funding situation, but more generally about a statement about the relevance or the significance or the value of science.

“There’s been a concern amongst scientists and friends of science that evidence has been crowded out by ideology and opinion in public debate, in policy making,” Holt added.

Holt, who is a physicist and formerly represented New Jersey’s 12th district as a Democrat for eight terms in Congress, said the March for Science was birthed when various scientists participating in the January 21st Women’s March, began to have conversations about the future of science.

However, the feelings that led to the march started long before Trump was ever elected.

“It’s true that the March for Science began in January but it was built on a growing level of concern that reached the level of anxiety about the conditions under which science can thrive,” he said. “Conditions have been challenged and threatened in a lot of ways for a number of years. Scientists find it appalling that evidence has been crowded out by ideological assertions, raw opinion and wishful thinking. We’ve seen that from both parties, from policy makers on all levels.”

Holt said while the march isn’t partisan, there are certain initiatives coming from the Trump administration that will negatively impact science, including the potential of a travel ban and a gag order on government scientists.

Lydia Villa-Komaroff, an honorary national co-chair of the March for Science, a molecular and cellular biologist and co-founding member of the Society for the Advancement of Chicanos/Hispanics and Native Americans in Science, explained at the press conference the importance of advocating for evidence-based science decisions.

“I think it is incredibly important that we try to make the case that the fundament base of science really underlies all of modern life,” Villa-Komaroff said. “I think if we use evidence-based science we will make better decisions.”

During the same press conference, Elias Zerhouni, president of global research and development at the Sanofi pharmaceutical company and the former director of the National Institutes of Health (NHI), said maintaining federal funding is crucial for the next generation of scientists and science work.

“What’s most critical is that federal funding is absolute critical to create the human capital that any society will need to push the fountains of knowledge,” Zerhouni said. “The new knowledge will allow not only society to use these ideas, but in the process train thousands of scientists.”

Zerhouni said there are about 300,000 scientists in the U.S. and he expects many of the younger or aspiring scientists to be discouraged from the field if funding dries up.

“Federal funding is not something you can turn on or off when it comes to human capital,” he said. “To me the March for Science is a way to say this is not a partisan issue, this is not one administration vs. another.”

Carol Greider, a professor of molecular biology at Johns Hopkins University and the 2009 Nobel Laureate of Medicine, agreed that funding is crucial to the future of science.

“Without the support from the NIH we will lose the next generation of scientists and the next wave of breakthroughs and therapies,” Greider said during the press conference. “If there is a 20 percent reduction in the NIH budget there will be no new grants for young scientists starting out and we will potentially lose an entire generation of people who are now trained and have the talents and are ready and eager to make the next breakthroughs.”

For more information on the March for Science visit their official website.