When John Campanella’s friend wanted his beloved Ferrari painted, he knew exactly who to call. After all, Campanella had been painting, pinstriping, and even airbrushing flames on to cars, motorcycles, airplanes, 18-wheelers, and guitars in his spare time for decades.

But that’s not why the Ferrari driver came to Campanella. He turned to him because John Campanella has been painting spacecraft for NASA’s Jet Propulsion Laboratory in Pasadena, Calif., for over two decades.

“We do a thousand different paint jobs a year at JPL, from components as small as a pill to entire spacecraft fuselages,” says Campanella.

“I have worked on the first Mars rover Pathfinder, the Deep Impact mission, GRAIL, Juno, and Cassini, and I think my paint is just about everywhere in the solar system. We just finished off the Mars 2020 chassis. And like just about everything else we work on, there is only one Mars 2020 rover. We had to get everything as close to perfect as we can get it.”

While there are thousands of steps that could be chosen to start a story about producing an SUV-sized, nuclear-powered six-wheel-drive vehicle for the Red Planet, this one begins four-and-a-half months before Campanella and his colleagues trained their highly-trained paint guns on the rover.

In mid-April 2018, more than 20 freshly machined, large, shiny chunks of 7050 and 7075 aluminum that would make up the primary structure of the chassis were collected in a cleanroom in Building 18 at JPL, along with about a hundred smaller secondary parts.

Over the following four-and-a-half months, Mars 2020 engineers and technicians planned, measured, examined, consulted, drilled and fastened until those many parts became a single Mars rover chassis.

“The plan called for 610 rivets, 730 washers, 644 nuts and 964 mechanical fasteners to hold the rover chassis together,” says Stephen Pakbaz, lead engineer for the Mars 2020 chassis assembly.

“That means there are well over 1,000 holes in the Mars 2020 rover. But in almost all cases we don’t just drill once for each hole; we drill three or more times — entirely by hand.”

Each hole in Mars 2020’s chassis began its life as a hand-drilled pilot hole. Next, a larger bit is introduced to expand the hole slightly. Then a final drilling of the same hole takes place.

“We drill holes in steps because it gives us the best chance to catch any errors, stresses the metal less, and the increments make it easier to drill by hand,” says Pakbaz.

“It’s detailed work and at times can be tedious, but everyone knows what is at stake.”

At the end of 5,000 engineering hours of assembly, involving more than 3,000 drillings and well beyond a thousand rivet and fastener applications, the rover’s chassis was complete. But it still was not ready for the paint guns of Campanella’s team. 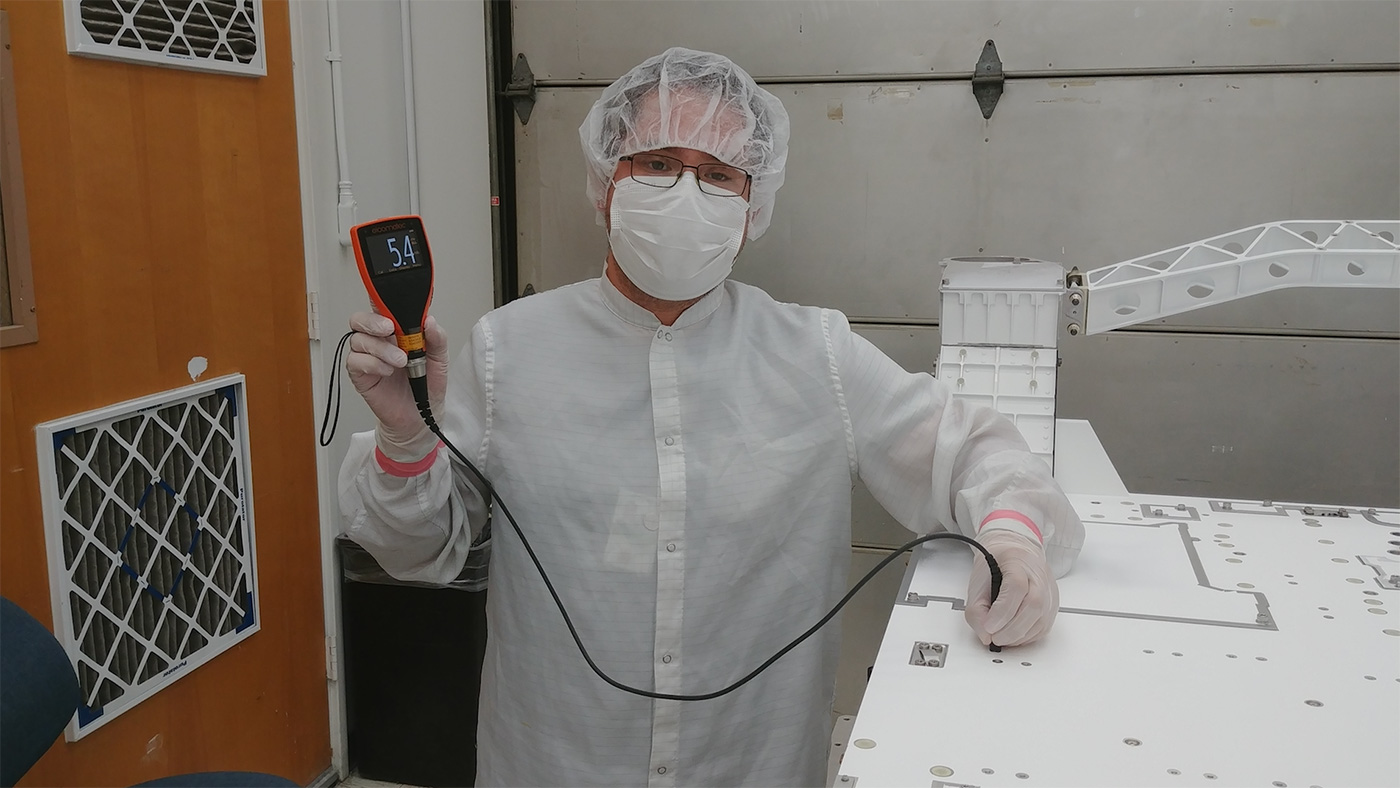 There are locations on the rover’s chassis where paint is strictly verboten — places where electronics boxes have yet to be bolted on, wiring harnesses are still to be run, and attachment points for hypersensitive science instruments that require bare metal surfaces to perform their best.

“Any good paint job is preceded by a great tape job,” says Campanella. “I wouldn’t freestyle flames on a Camaro, and we sure don’t freestyle Mars rovers.”

So on Aug. 1, 2018, the drills and rivet guns in Building 18 Room 102 vanished from sight, and in their place materialized metal stencils, tape measurers, and roll upon roll of masking tape.

“You can find the masking tape we used on 2020 in just about any hardware store,” says Ryan van Schilifgaarde, a support engineer for Mars 2020 assembly.

“But whereas you would probably tear off a strip with your hands and eyeball it onto the wall you wanted to paint in your house, we use a computer-controlled cutter to make sure each piece is exactly the size and shape we want it to be.”

Numbering more than 600, the pieces of masking tape for the rover came in all shapes and sizes. Many were smaller than a coin, but a few were about the size of a bagel, and one (covering where fiber optic cable channel will go) was shaped like a serpent and as large as a microwave oven.

All were applied by hand and smoothed out to prevent bubbling.

“One hundred and thirty-five temporary sheet-metal stencils also were applied during this time,” says van Schilifgaarde.

“They mask larger locations on the rover that require a more rigid cover during this part of the build.”

The masking team measured success by the millimeter, and more than one application of masking tape had to be recut and reapplied after a visit from Quality Assurance. But with five Mars 2020 engineers logging 500 hours over seven days, the task was finally complete.

On Aug. 6, 2018, the Mars 2020 rover chassis — festooned with metal overlays and masking tape, and then covered in sterile antistatic wrap — was gingerly forklifted 150 yards from Building 18 to JPL’s paint shop.

“With any spacecraft, after you get the static wrap off and inspect the rover, you start with surface prep — abrading the surface with sand paper so the paint will adhere better,” says Campanella.

“To prevent any chance of corrosion or oxidation, the rule is, once you start sanding, you have six hours to complete everything — sanding, priming, and painting.”

As spacecraft paint jobs go, the Mars 2020 rover was big, and occupied much of the paint room. Because of the rover’s size, Campanella worked with just two other people from his six-person team: Patrick Esquivias and their assistant Eddie Castro.

Up until two years ago Esquivias had been an aircraft mechanic. This was his first rover. Up until eight months ago, Castro painted houses. This was his twelfth spacecraft.

The small team took on the rover in stages. They painted the top deck first, then let things cure for a day before tackling the sides. Another day off and they finished with the front and back. Even with the job spread out, sanding and meticulously cleaning the results of said sanding ate up over two of the six available hours.

But time constraints are just part of the paint job for Campanella’s team. Whether it’s an Earth orbiter, Mars lander or something destined for the outer planets, standardization, fastidiousness and a steady hand are always the order of the day.

“You can’t think about where it’s going or how much history it can make,” says Campanella.

“We use the same paint guns on the same setting and fire them from the same distance and move at the same speed each and every time.”

The primer and paint used on Mars 2020 are far from hardware-store variety. Along with being able to adhere to aluminum, they have been proven through rigorous testing to be able to endure the jolts, vibrations, UV rays and other indignities of a trip to Mars, as well as be hearty enough to survive the Martian cold — all the while not outgassing organic compounds and other materials that could affect the mission’s science experiments.

In less than 10 minutes, all the gleaming aluminum and beige masking tape disappeared under Esquivias’ steady hand. But before the first layer of flat white had a chance to dry, Esquivias made his way back to the starting point to apply a second coat — the still-tacky first coat helping make a stronger bond between layers. Then the process was repeated a third and final time.

Less than five hours in, the first painting session on the Mars 2020 rover chassis drew to a close.

Esquivias had been aiming to coat the chassis in a blanket of paint between 4 and 6 mils (or thousandths of an inch) thick. But he would not know until later the next day how they did because the test equipment that Quality Assurance uses to evaluate paint application must come into contact with the painted chassis to provide an accurate readout. And nobody wants to ruin a good paint job.

Even before Quality Assurance could weigh in, Campanella declared Esquivias’ first rover a success.

“We paint every day, and when we are not painting we are practicing. He nailed it.”

The next day, Quality Assurance confirmed that Esquivias had nailed it.

On Aug. 14, the Mars 2020 rover chassis was again carefully sheathed in antistatic wrap and transported “up the hill” to Building 144, where it would be baked in a vacuum chamber.

“Cooking the chassis at 230 F (110 C) in a vacuum for three days not only hardens the paint, it literally bakes out contaminants from the paint that could possibly outgas in flight,” says Pakbaz.

“Since Mars 2020 is an astrobiology mission, ensuring Mars samples have not been contaminated is paramount. Baking the rover goes a long way to making that possible.”

On Monday, Aug. 20, the rover chassis came out of the oven. After inspection, it was again covered in sterile, antistatic film and returned to the cleanroom in Building 18 for some final touches and inspections.

About two weeks later, on Sept. 5, a forklift gently carried the assembled, painted, and baked chassis at no more than 3 mph back down the hill, a half-mile to JPL’s Spacecraft Assembly Facility High Bay 1, where it took its place next to the cruise and descent stages tasked with getting the rover safely to Mars.

A few days after the chassis arrived, John Campanella appeared in the gallery overlooking the high bay. With him were Esquivias and Castro.

“When we are in the paint room, it is all about business,” says Campanella.

“But now that our job is done, I wanted to make sure they took a moment to let it sink in that they are part of a dedicated team of professionals working on a historic mission of exploration.”

“It may not have flames or racing stripes,” he adds, “but it still looks beautiful.”

Mars 2020 will launch from Space Launch Complex 41 at Cape Canaveral Air Force Station in Florida and is expected to reach Mars in February 2021.

The Mars 2020 project at JPL in Pasadena manages rover development for the Science Mission Directorate at NASA Headquarters in Washington. NASA’s Launch Services Program, based at the agency’s Kennedy Space Center in Florida, is responsible for launch management.