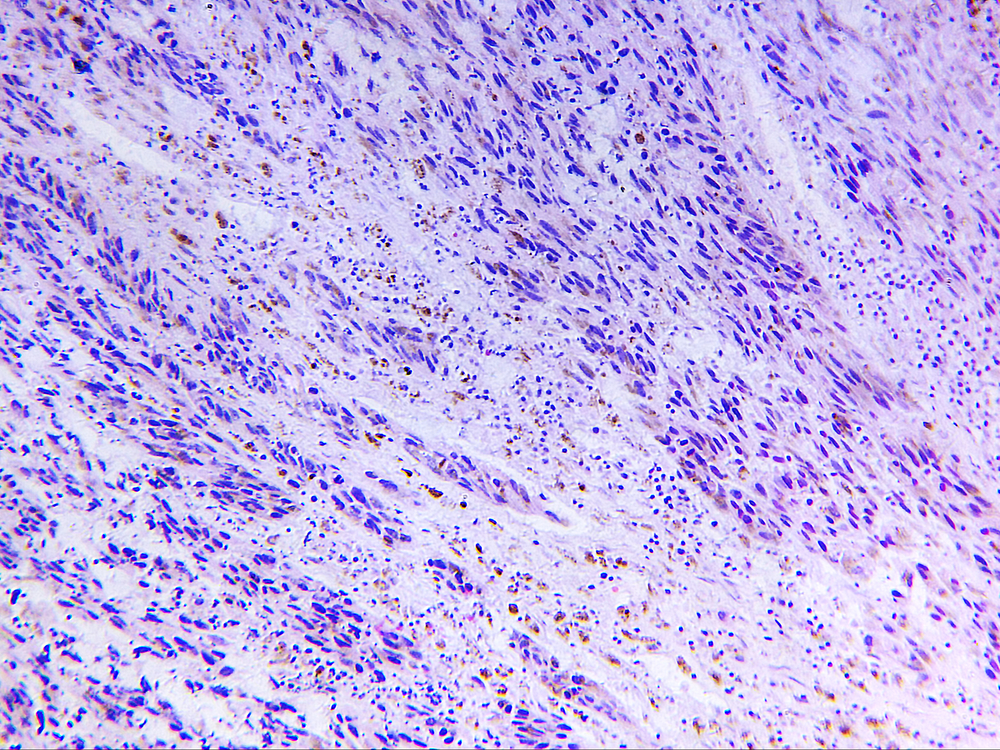 Melanoma tumors use genetic mutations in a prominent immune response pathway to resist the immunotherapy ipilimumab, researchers from The University of Texas MD Anderson Cancer Center report in the journal Cell.

Their findings open the door to testing an array of IFN-y genes prospectively as a predictor for response to ipilimumab and for exploring new combinations to defeat IFN-y-related resistance.

Ipilimumab, known commercially as Yervoy, was the first drug to unleash an immune attack on cancer by blocking a protein that acts as a brake on T cells, white blood cells that serve as the adaptive immune system’s guided missiles. The drug that blocks CTLA-4 was approved in 2011 for metastatic melanoma and is in clinical trials as a single agent or in combination with other drugs in many other types of cancer.

“Research has shown that ipilimumab treatment provides a significant survival benefit in about 20 percent of patients with melanoma,” Sharma said.  “The mechanisms responsible for the lack of clinical response in the majority of patients have remained unknown.”

Impact on patients, response and survival

Interferon-gamma is an immune response-stimulating cytokine – a signaling molecule crucial to activating immune cells.  In addition, IFN-y directly attacks tumor cells by connecting to receptors on the cell surface and setting off a chain of events that inhibits cell growth and promotes tumor cell death. It’s this direct cell-killing role that may be blocked by genetic mutations, Sharma said.

Nine of the 12 non-responders had copy number alterations.  The most significant included genomic loss of the two receptors for IFN-y, IFNGR1 and IFNGR2, and two important downstream genes, IRF-1 and JAK2. Two known inhibitors of the pathway, SOCS1 and PIAS4, were amplified.

An analysis of survival data of 367 melanoma patients in The Cancer Genome Atlas database showed that those with copy number alterations had significantly shorter survival of 40 months, compared to 48.2 months for those without the mutations.

In a melanoma cell line vulnerable to IFN-y attack, knocking out IFNGR1, the receptor for the cytokine, allowed the tumor cells to grow even in the presence of IFN-y.

When the researchers used the same cell line (B16/BL6) in mice and treated them with ipilimumab, only four of 24 mice with an intact IFN-y receptor developed cancer, while 12 of 25 that had the receptor knocked down developed tumors.

All untreated mice died from tumor growth, while 80 percent of those treated with ipilimumab who had intact IFN-y receptors survived, compared to about half of mice who had the receptor knocked down.

The team’s findings point to possible use of an 11-gene IFN-y pathway signature that can be tested in prospective clinical trials as a predictor of response to ipilimumab.  If confirmed as a predictor, it can be used to guide treatment with ipilimumab alone or in combination with other drugs.

Another area of study is to seek combination therapies that overcome the loss of the IFN-y pathway.  “We might be able to stimulate the immune system to produce other cytokines that can overcome tumors with IFN-y pathway genes turned off,” Sharma said.

Impaired IFN-y signaling also has been found by other researchers to cause resistance to blockade against PD-1, a different immune checkpoint.  While IFN-y is important, Sharma noted that there are likely other mechanisms in tumors that help them resist immunotherapy.