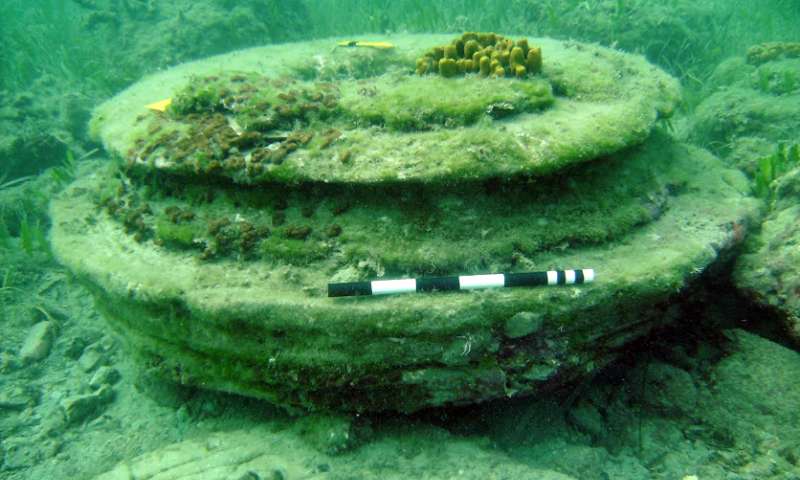 The underwater features look as if they were fabricated. Situated off the coast of the Greek island Zakynthos, they resemble cobblestone paths and circular column bases.

Following their discovery, researchers posited that the features belonged to an ancient port that was submerged when the island was hit by tidal waves. Curiously, there were no other remnants of human occupation, which prompted further investigation of the site.

“There’s no other evidence, nothing that suggests human civilization,” Julian Andrews, an author of the study who is affiliated with the University of East Anglia, said to Smithsonian.com. “There’s no pottery, no coins, nothing else that usually goes along with these things.”

Using an array of methods, including microscopy, X-ray, and stable isotope techniques, the team determined the jutting columns were actually the result of the mineralization process often paired with hydrocarbon seeps.

“Microbes in the sediment use the carbon in methane as fuel,” Andrews said in a statement. “Microbe-driven oxidation of the methane then changes the chemistry of the sediment forming a kind of natural cement, known to geologists as concretion.”

The cement turned out to be a mineral called dolomite, which the researchers noted usually doesn’t form in such shallow seawaters. The site is between 2 and 5 meters below the water surface.

“Isotope data suggests the concretions are fossil features, possibly of Pliocene age and represent an exhumed hydrocarbon seep plumbing system,” the researchers wrote. “Exposure on the modern seabed in the shallow subtidal zone has caused confusion, as concretion morphology resembles archaeological stonework of the Hellenic period.”