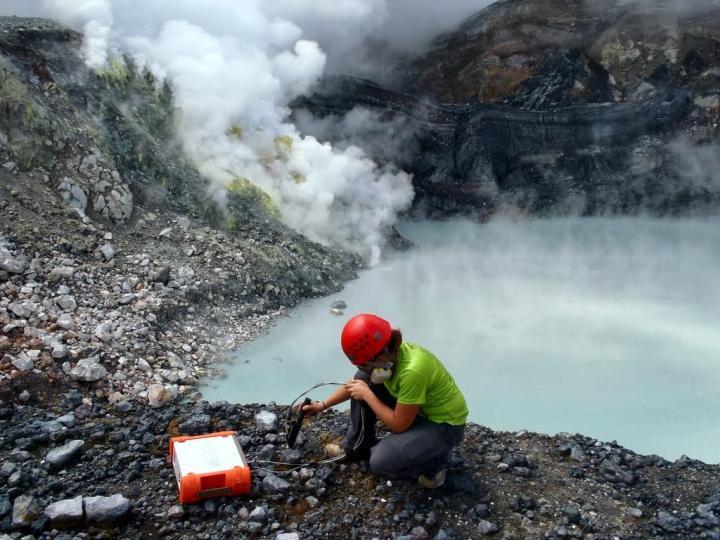 Researchers at the University of Colorado Boulder have discovered microbes living in a toxic volcanic lake that may rank as one of the harshest environments on Earth. Their findings, published recently online, could guide scientists looking for signs of ancient life on Mars.

The team, led by CU Boulder Associate Professor Brian Hynek, braved second-degree burns, sulfuric acid fumes and the threat of eruptions to collect samples of water from the aptly-named Laguna Caliente. Nestled in Costa Rica’s Poás Volcano, this body of water is 10 million times more acidic than tap water and can reach near boiling temperatures. It also resembles the ancient hot springs that dotted the surface of early Mars, Hynek said.

The Costa Rican lake can support life–but only barely. Hynek and his colleagues found microbes belonging to just a single species of bacteria in the lake water, a rock-bottom level of diversity.

“Even in an extremely harsh environment, there can still be life,” said Hynek of the Laboratory for Atmospheric and Space Physics and the Department of Geological Sciences. “But then there’s very little life. Mars was just as extreme in its early history, so we should probably not expect to find evidence of large-scale biodiversity there.”

Laguna Caliente is chaotic, with water temperatures that can swing wildly in the span of hours and magma channels running under the lake that kick off frequent, geyser-like eruptions.

“We’re at the limits of what life on Earth can tolerate,” Hynek said. “It’s not somewhere you want to spend a lot of time because you’d probably get covered in boiling mud and sulfur from the eruptions.”

To search for living organisms in this “fringe” environment, the researchers scanned samples of lake water for DNA. In research published this month in Astrobiology, they found the signature of one species of bacteria belonging to the genus Acidiphilium–a group of microbes that scientists have previously seen in toxic drainage from coal mines and other harsh locations.

“It’s not uncommon to find an environment with no life, say in a volcano that’s self-sterilizing,” Hynek said. “But to find a single type of organism and not a whole community of organisms is very, very rare in nature.”

If life did evolve on Mars, Hynek said, it would likely have survived in ways similar to the lake’s bacterium–by processing the energy from iron- or sulfur-bearing minerals. Hynek has spent much of his career searching for places on Earth today that look like Mars did nearly four billion years ago, when liquid water was plentiful on the surface.

It’s a hard task: Rampant volcanism during that period created volatile and mineral-rich pools of water, giving rise to “Yellowstones all over Mars,” Hynek said.

In 2020, NASA is planning to send the Mars 2020 Rover to the Red Planet to hunt for fossil evidence of life. Hynek said that they should look first at these “Yellowstones.”