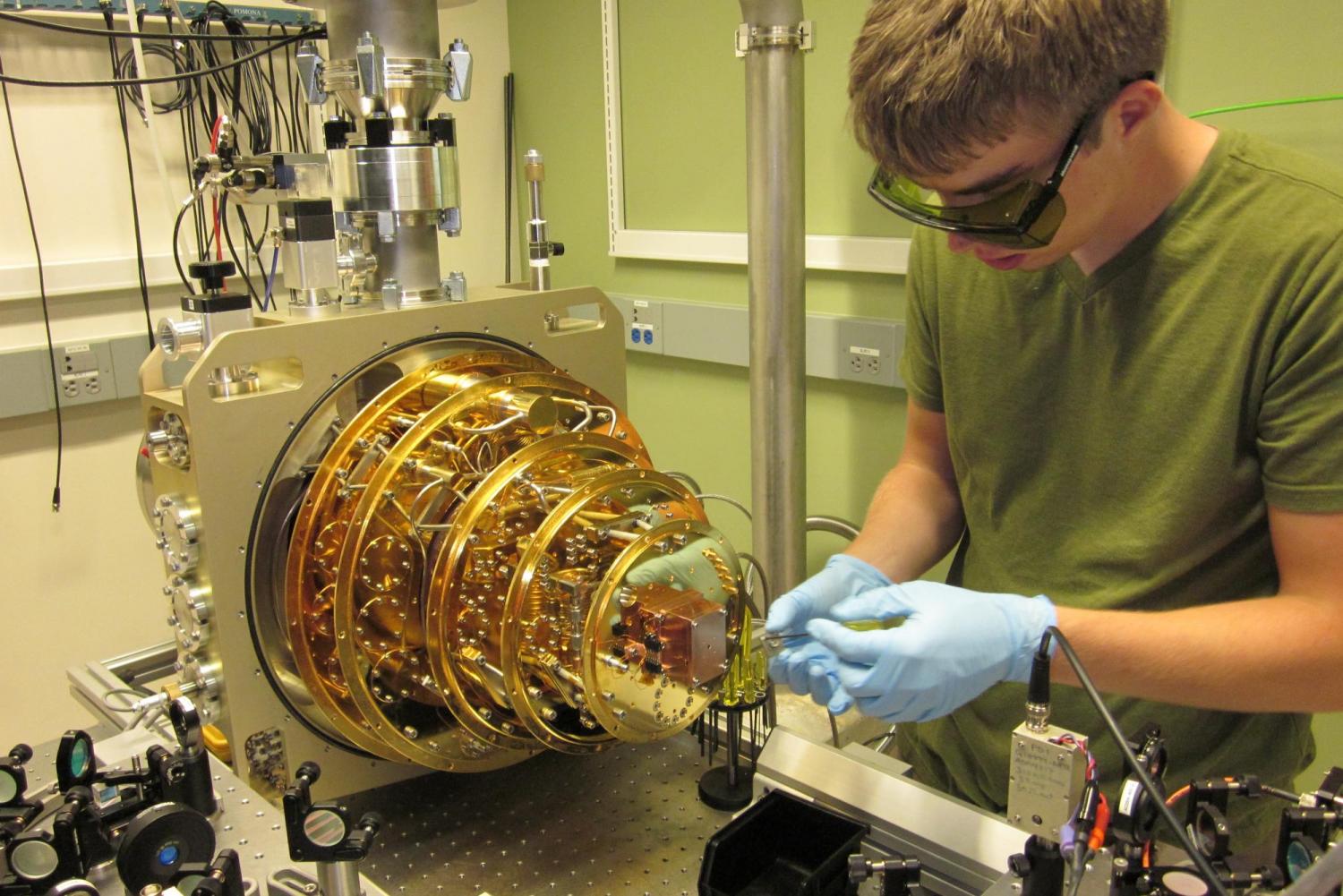 Robert Peterson, a former graduate student at JILA, works with a “dilution refrigerator.” This equipment can cool scientific instruments, like a new quantum “trampoline,” down to a fraction of a degree above absolute zero. Credit: Peter Burns

A joint research team from the University of Colorado Boulder and the National Institute of Standards and Technology (NIST) have developed a method to convert microwave signals, like those produced by quantum chips, into light beams that travel through fiber optic cables with a device that uses a small plate that can absorb microwave energy and bounce it into laser light.

Creating prototype quantum chips remains a challenging endeavor because some top-of-the-line quantum chips send out data in the form of photons that often wobble at microwave frequencies. In addition, much of modern communications rely on fiber optic cables that can only send optical light.

Peter Burns, a graduate student at the University of Colorado who was one of the leader researchers on the project, said the device—dubbed a microscopic trampoline—is closing in on a 50 percent success rate for efficiently converting microwaves into light—a crucial threshold needed for quantum computers to become everyday tools.

In an interview with R&D Magazine, Burns explained how with further improvements, the device could one day be able to link together substantial networks of quantum computers.

R&D Magazine: How did you come up with the microscopic trampoline?

Burns: The big picture motivation for the project was there is kind of this emerging quantum information field and there is a lot of different platforms that are being researched. Each one has its own strengths and weaknesses. One of the strategies might be to try to link these systems. For example, there is a large push in the superconductive circuit world to make on-chip quantum systems. With these systems, we can try to make quantum computers with or try to make quantum networks with. But the challenges with them is that you can’t transmit that information over very large distances because they all have to be inside of a helium dilution refrigerator near absolute zero.

Another competing platform is in the optical domain and in this field you can use laser beams and fiber optic cables to transmit quantum information over really long distances. The goal of this project is to try to merge those two technologies and try to get them to communicate with each other so we can leverage the strengths of both of them.

Burns: As it currently is, there is still some work that needs to be done to make it widely accessible. The latest paper had two figures of merit for how well the device worked and that is the efficiency and the added noise. The efficiency of this device was about 47 percent and there is a threshold at 50 percent for using it in a quantum mechanical way. So we are still just below that threshold, but the paper was kind of a proof of feasibility. We think there are a few minor improvements to get us there.

For a quantum network, you want each piece of the quantum link to add less than one photon of added noise and ours is currently in the tens of photons range. It is like 30 for this device. That’s a challenge we have to overcome.

One of the cool parts of this recent paper was it is thought in the field that you have to be below one photon of added noise for this device to be useful. Our paper, we found a way where you could cancel out the effect of added noise and get around that threshold.

If we make a few baby steps on the efficiency and use the new method for dealing with added noise, we think our device could be useable already for some sort of extended quantum network.

R&D Magazine: Are those two challenges related to one another?

R&D Magazine: What are the goals for this project?

Burns: There are a lot of long-term goals for it, but the nearest short-term goal is once you meet those requirements or even if you are near the added noise figure, then the first thing you would be able to do with this device is use it to create entanglement between microwave photons and optical photons. This would allow you to create an extended entanglement network. What I mean by that is you can have the microwave photons inside the helium dilution refrigerator and have some localized entanglement there. Then you optical photons propagate at room temperature through optical fiber over kilometer scale distances and extend that entanglement. There are a lot of schemes and devices that use this kind of entanglement like quantum cryptographer and quantum key distributions. That is the first use for this project we have.

R&D Magazine: What are your next steps?

This interview has been edited for length and clarity