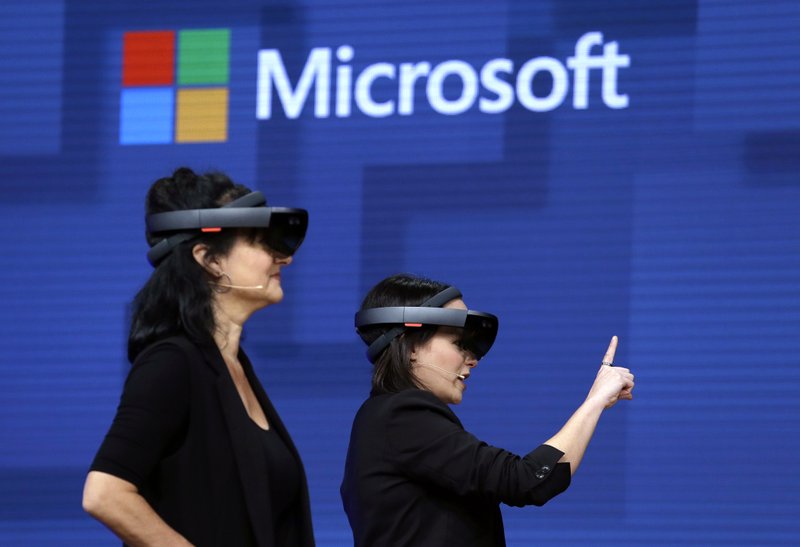 FILE - In this Thursday, May 11, 2017, file photo, members of a design team at Cirque du Soleil demonstrate use of Microsoft’s HoloLens device in helping to virtually design a set at the Microsoft Build 2017 developers conference, in Seattle. Microsoft Corp. reports earnings, Thursday, July 20, 2017. (AP Photo/Elaine Thompson)

Microsoft’s cloud computing business helped boost its fourth-quarter revenue and earnings above Wall Street’s expectations, further validating a strategy pushed by CEO Satya Nadella since he took over in 2014.

Nadella described the better-than-expected performance in a conference call Thursday as part of the “continuing transformation” of the Redmond, Washington-based company.

The results handily beat Wall Street expectations. The average estimate of 14 analysts surveyed by Zacks Investment Research was for adjusted earnings of 71 cents per share.

Microsoft shares have risen 19 percent since the beginning of the year, while the Standard & Poor’s 500 index has risen 10 percent. They slipped 57 cents to $73.70 in extended trading following the release of the earnings report.

The company earlier this month announced it was cutting thousands of sales jobs.

On Thursday it recorded $306 million in fourth-quarter employee-severance expenses related to a sales and marketing restructuring plan. Asked about the restructuring, Nadella characterized it as part of a shift in skill sets to adapt to changing demand.

“This transformation is ongoing,” Nadella said. “It’s been happening over multiple years, but now we’ve got very good customer momentum.”