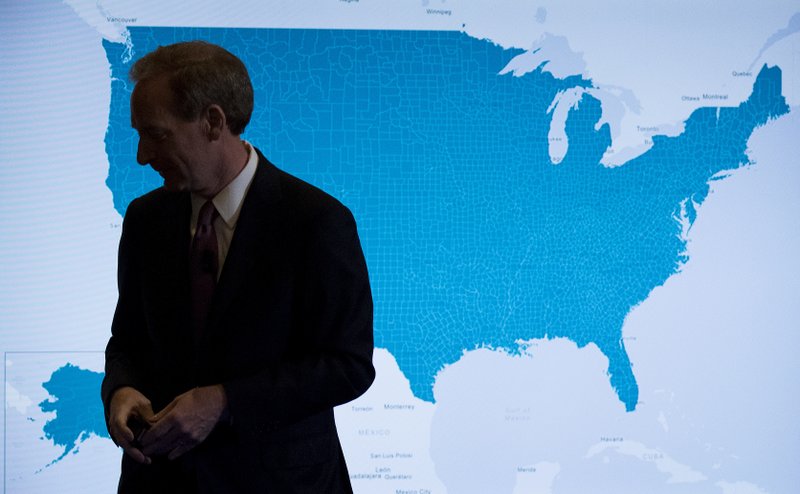 Microsoft President and Chief Legal Officer Brad Smith pauses in front of a monitor displaying the U.S. as he speaks in Washington, Tuesday, July 11, 2017, about Microsoft’s project to bring broadband internet access to rural parts of the United States. (AP Photo/Carolyn Kaster)

Microsoft wants to extend broadband services to rural America by turning to a wireless technology that uses the buffer zones separating individual television channels in the airwaves.

Microsoft plans to partner with rural telecommunications providers in 12 states stretching from Washington to Maine to get about 2 million rural Americans connected to high-speed internet over the next five years.

It’s also calling for regulatory cooperation from the Federal Communications Commission and broader support from the public sector to expand rural broadband to the more than 20 million people who don’t have it.

Brad Smith, Microsoft’s president and chief legal officer, said the company won’t make money on the operations, but could benefit from serving rural users with its services, many of which run ads or require paid subscriptions.

The project still faces several challenges, including the costs of setting up antennas and service base stations, as well as the devices individual homes will need. Those costs are expected to decline over time, though.

Microsoft has tried using the TV buffer zones, or white space, to provide broadband internet in several countries. But the idea is “still in its infancy,” said Parmesh Ramanathan, an engineering professor at the University of Wisconsin.

Ramanathan said this technology could prove cheaper than existing methods, such as laying down fiber-optic cables, but telecom companies will still need subsidies to make it economical.

“It requires a sustained effort,” he said. “It’s not something where you can show profit in a quarter. They have to have longer-term vision.”

The initiative also faces objections from the National Association of Broadcasters, which said it was the “height of arrogance” for Microsoft to “demand free, unlicensed spectrum after refusing to bid on TV airwaves” in a recent FCC auction. The group said the buffer zones, though currently unused, are important for preventing adjacent channels from interfering with each other.

That’s less of a problem in most rural areas, said Doug Brake, a telecommunications policy analyst with the Information Technology and Innovation Foundation, a think tank that includes Microsoft among its donors.

“In rural areas, there aren’t that many television broadcasters so there’s a lot of unused spectrum,” Brake said. “The real challenge is getting the number of users, the scale. Is there enough of a market for the device manufacturers to build these devices?”

To make it work, Microsoft said the FCC will have to guarantee that these buffer zones remain available nationwide – and make even more such zones available in rural areas. Other companies, including Google, have made similar requests.

Of the three TV channels that Microsoft wants the FCC to free up around the country for what it describes as “public” use, the biggest controversy has centered around one used by low-power television broadcasters that often provide niche programming to small communities. Brake said some of those stations “might get bumped off in a few markets” if those airwaves are reserved for broadband internet service.

Microsoft is already piloting its idea in a sparsely populated region of southern Virginia, where it’s providing $250,000 to the Mid-Atlantic Broadband Communities Corp. The South Boston, Virginia-based telecommunications provider will contribute another $250,000 and use a $500,000 grant from the Virginia Tobacco Region Revitalization Commission. The project is providing free internet for local students to access educational websites, and charging customers who want expanded service.

Mid-Atlantic’s chief executive, Ted Deriso, said he reached out to Microsoft several years ago after seeing the Redmond, Washington, company deploy the technology in other parts of the world.

“We said, ‘Wow, the problems they’re trying to solve in rural parts of Africa are the same we have in rural Virginia, on the technology side,'” Deriso said.

He said the use of television white spaces is great for rural areas with lots of trees, hills and other obstacles.

“You need a type of technology that can go longer distances and has better penetration,” he said. “You’re trying to reach more customers without using a ton of equipment.”

FCC Chairman Ajit Pai visited Deriso’s southern Virginia office on Tuesday to talk about the project, around the same time Smith was unveiling Microsoft’s plan to industry and political leaders at a Washington hotel near the White House.