For the replacement of animal testing with alternatives in medical research, complex microtissues need to be cultivated. Researchers from Empa have developed a special polymer scaffold for three-dimensional cell cultures. Light beams act as signposts for the cells.

In pharmaceutical research, scientists try to do without animal testing wherever possible or replace it with experiments on cell or tissue cultures. Growing highly complex three-dimensional structures made of cells, however, still poses problems for researchers. A team at Empa has now developed a kind of scaffold, in which cells can spread, multiply and interconnect. The innovative aspect about the new matrix: The precision of the desired form and function is controlled by light.

The new material consists of a gel, for which a light-sensitive mechanism can be used to incorporate a large number of functional groups into its polymer structure. “This means that signals can be attached to the polymer backbone, which enable ingrowing cells to ‘anchor’ themselves within the scaffold,” explains Empa researcher Markus Rottmar from the Laboratory for Biointerfaces in St. Gallen.

Other groups in this “hydrogel” carry docking points for enzymes, which the cells can use to tailor the synthetic scaffold to their needs. Another advantage: The hydrogel is extremely well tolerable from a biological point of view and offers the cells a specific environment to grow into a three-dimensional structure. 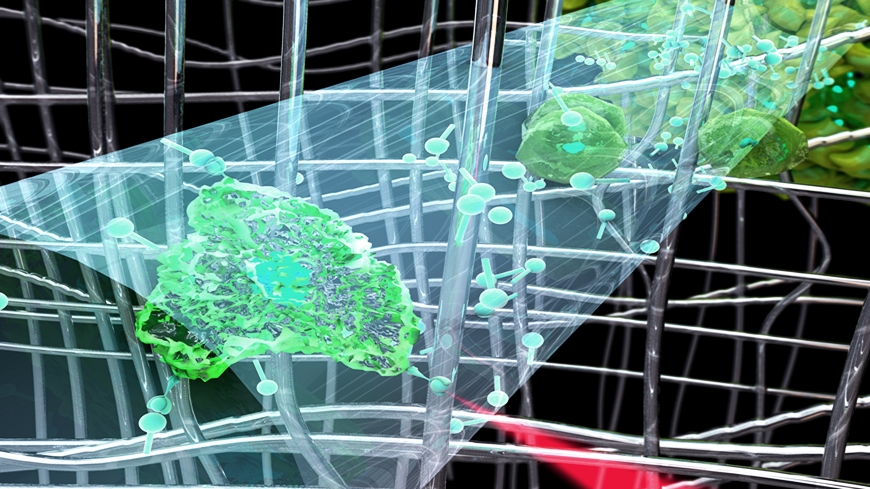 The form of the scaffold needs to be controllable right down to the very last detail if it is to produce a functional tissue. Irradiating it briefly with UV light initially causes the polymer hydrogel to polymerize before a laser puts on the finishing touches: Based on the principle of lithography, the infrared laser writes a precise structural design in the matrix and incorporates components with different functions in the scaffold.

“The cells grow based on the prescribed plan and form an initial network,” says project leader Katharina Maniura. In a matter of hours, the cells begin to dissolve and reshape the scaffold in these specific positions. According to Maniura, this makes it considerably easier to cultivate complex, three-dimensional microtissues.

Not only is the hydrogel ideal as a facilitator to develop alternatives to animal testing; investigating diseases and improving our understanding of cell growth are also among the fields of application for the novel material.