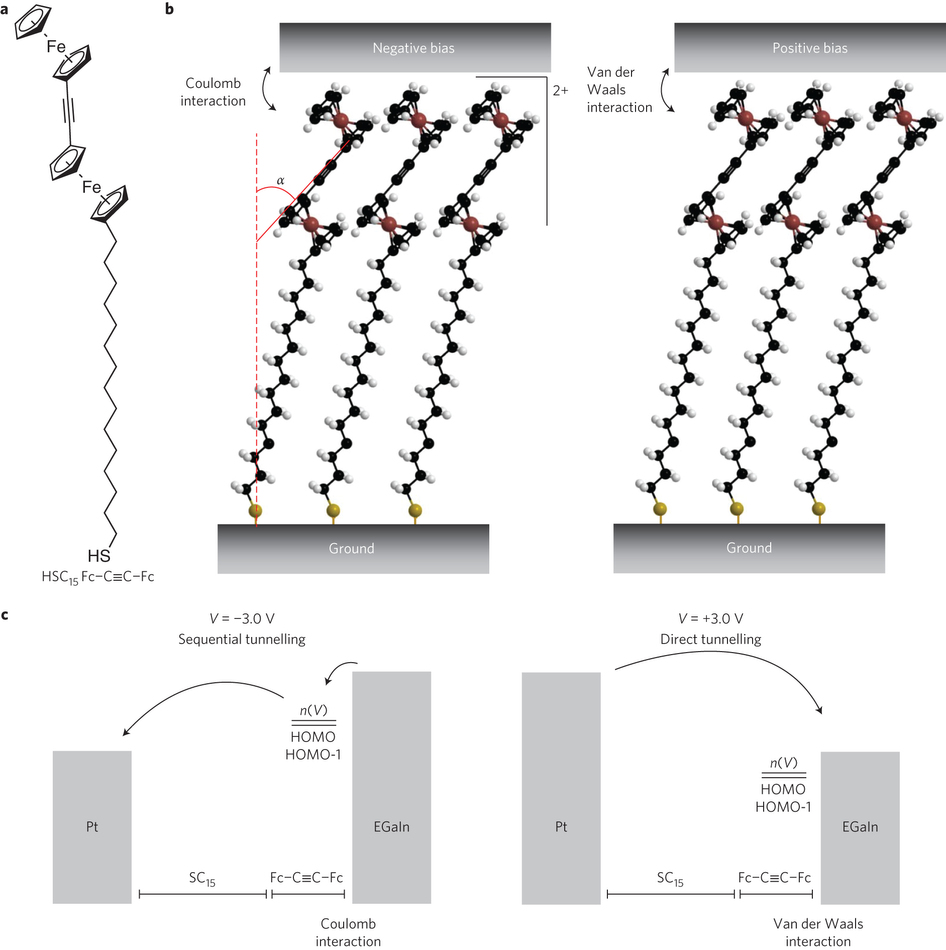 The junctions and mechanism of rectification. a, Molecular structure of HSC15Fc–C≡C–Fc. b, Schematic illustration of the junctions, where α is the tilt angle of the Fc–C≡C–Fc unit. Double arrows indicate the Coulomb or van der Waals interaction between the Fc–C≡C–Fc unit and the negatively or positively biased top electrode, respectively. c, Energy-level diagrams at negative and positive bias, where the arrows indicate the mechanism of charge transport and n(V) is the functional describing the bias-dependent number of molecules involved in the charge transport. (Credit: Nature Nanotechnology)

An international research team that includes University of Central Florida Professor Enrique del Barco, Damien Thompson of the University of Limerick and Christian A. Nijhuis of the National University of Singapore has cracked an important limitation that for nearly 20 years has prevented the practical use of molecular diodes.

Now, as reported Monday in the scholarly journal Nature Nanotechnology, a team of scientists led by Nijhuis has demonstrated a way to reach a rectification ratio that had been thought a theoretical impossibility.

The researchers were able to form macroscale tunnel junctions based on a single layer of molecular diodes. The number of molecules conducting current in those junctions changes with the bias polarity, thus multiplying the intrinsic rectification ratio of an individual molecule for forward bias by three orders of magnitude. Their method overcame the 103 limitation, resulting in a record-high rectification ratio of 6.3 x 105.

“It surpassed that limit imposed by theory. Definitively, you now have a molecular diode that responds comparably to silicon-based diodes,” said del Barco, a physicist who interpreted the data and performed the theoretical modeling that explained how it works. “It moves something that was only science into a commercial possibility.”

The breakthrough isn’t likely to replace silicon diodes, but could eventually bring about the use of molecular diodes for applications that silicon diodes can’t handle. And molecular diodes, which can be produced in a chemistry lab, would be cheaper and easier to fabricate than standard diodes.