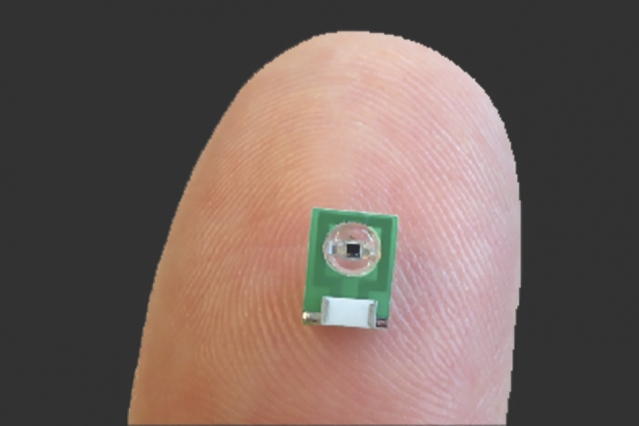 The new sensor can be implanted in the brain to allow scientists to monitor electrical activity or light emitted by luminescent proteins. Image: Courtesy of the researchers

Researchers commonly study brain function by monitoring two types of electromagnetism — electric fields and light. However, most methods for measuring these phenomena in the brain are very invasive.

MIT engineers have now devised a new technique to detect either electrical activity or optical signals in the brain using a minimally invasive sensor for magnetic resonance imaging (MRI).

MRI is often used to measure changes in blood flow that indirectly represent brain activity, but the MIT team has devised a new type of MRI sensor that can detect tiny electrical currents, as well as light produced by luminescent proteins.

(Electrical impulses arise from the brain’s internal communications, and optical signals can be produced by a variety of molecules developed by chemists and bioengineers.)

“MRI offers a way to sense things from the outside of the body in a minimally invasive fashion,” says Aviad Hai, an MIT postdoc and the lead author of the study.

“It does not require a wired connection into the brain. We can implant the sensor and just leave it there.”

This kind of sensor could give neuroscientists a spatially accurate way to pinpoint electrical activity in the brain. It can also be used to measure light, and could be adapted to measure chemicals such as glucose, the researchers say.

Alan Jasanoff, an MIT professor of biological engineering, brain and cognitive sciences, and nuclear science and engineering, and an associate member of MIT’s McGovern Institute for Brain Research, is the senior author of the paper, which appears in the Oct. 22 issue of Nature Biomedical Engineering. Postdocs Virginia Spanoudaki and Benjamin Bartelle are also authors of the paper.

Jasanoff’s lab has previously developed MRI sensors that can detect calcium and neurotransmitters such as serotonin and dopamine. In this paper, they wanted to expand their approach to detecting biophysical phenomena such as electricity and light.

Currently, the most accurate way to monitor electrical activity in the brain is by inserting an electrode, which is very invasive and can cause tissue damage.

Electroencephalography (EEG) is a noninvasive way to measure electrical activity in the brain, but this method cannot pinpoint the origin of the activity.

To create a sensor that could detect electromagnetic fields with spatial precision, the researchers realized they could use an electronic device — specifically, a tiny radio antenna.

MRI works by detecting radio waves emitted by the nuclei of hydrogen atoms in water. These signals are usually detected by a large radio antenna within an MRI scanner.

For this study, the MIT team shrank the radio antenna down to just a few millimeters in size so that it could be implanted directly into the brain to receive the radio waves generated by water in the brain tissue.

When this happens, a weaker image arises when the sensor is scanned by an external MRI machine.

“We showed that these devices are sensitive to biological-scale potentials, on the order of millivolts, which are comparable to what biological tissue generates, especially in the brain,” Jasanoff says.

The researchers performed additional tests in rats to study whether the sensors could pick up signals in living brain tissue. For those experiments, they designed the sensors to detect light emitted by cells engineered to express the protein luciferase.

Normally, luciferase’s exact location cannot be determined when it is deep within the brain or other tissues, so the new sensor offers a way to expand the usefulness of luciferase and more precisely pinpoint the cells that are emitting light, the researchers say.

Luciferase is commonly engineered into cells along with another gene of interest, allowing researchers to determine whether the genes have been successfully incorporated by measuring the light produced.

One major advantage of this sensor is that it does not need to carry any kind of power supply, because the radio signals that the external MRI scanner emits are enough to power the sensor.

Hai, who will be joining the faculty at the University of Wisconsin at Madison in January, plans to further miniaturize the sensors so that more of them can be injected, enabling the imaging of light or electrical fields over a larger brain area. In this paper, the researchers performed modeling that showed that a 250-micron sensor (a few tenths of a millimeter) should be able to detect electrical activity on the order of 100 millivolts, similar to the amount of current in a neural action potential.

Jasanoff’s lab is interested in using this type of sensor to detect neural signals in the brain, and they envision that it could also be used to monitor electromagnetic phenomena elsewhere in the body, including muscle contractions or cardiac activity.

“If the sensors were on the order of hundreds of microns, which is what the modeling suggests is in the future for this technology, then you could imagine taking a syringe and distributing a whole bunch of them and just leaving them there,” Jasanoff says.

“What this would do is provide many local readouts by having sensors distributed all over the tissue.”

The research was funded by the National Institutes of Health.