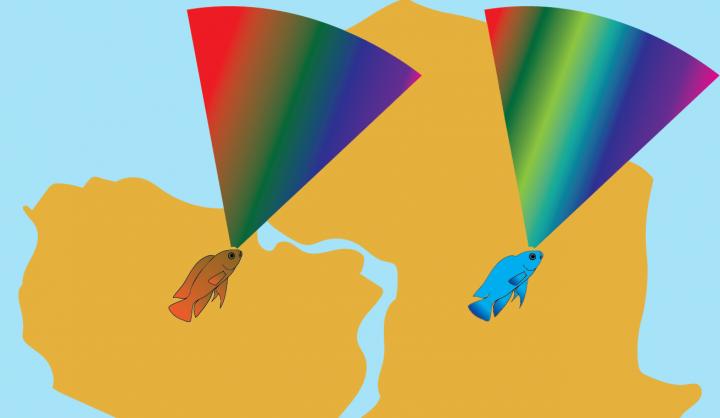 Cichlids are a remarkably diverse family of fish, with many African freshwater species known for their incredible visual system. These cichlids’ complex vision results from a diverse array of visual pigment proteins in their retinas: while humans have the genes to produce three of these proteins (called opsins), many cichlids have seven. Each African cichlid species produces a specific suite of opsin proteins that matches well with the light spectrum of their environment.

The visual systems of African cichlid species, which evolved in calm, clearwater lakes saturated with sunlight, are fairly well studied. But a new analysis from the University of Maryland and Sao Paolo State University in Brazil is the first to look at vision in cichlids that live in the murky, silty water of South America’s Amazon Basin. The researchers found that, in three select Amazonian species, several opsin genes had been switched off or lost entirely.

The research paper, published December 20, 2016 in the journal Molecular Ecology, describes how three Amazonian cichlid species have adapted to the murky light environment of the Amazon Basin, which favors longer wavelengths of light such as red and orange. South American and African cichlids diverged from a common ancestor about 100 million years ago, after the supercontinent Gondwana separated to form both modern continents. Important environmental changes led South American cichlids down a path very different from their African relatives.

“In clear water, short wavelengths of light transmit best. That’s why oceans and large, deep freshwater lakes, like some found in Africa, appear green and blue. But in rivers like the Amazon, there is a lot of silt and organic matter that blocks out short wavelengths,” said Karen Carleton, a professor of biology at UMD and senior author on the study. “We found that these differences are enough to have caused Amazonian species to lose or switch off some of the opsins that detect short wavelengths.”

Carleton’s Sao Paolo State University colleagues, led by Cesar Martins, sequenced the genomes of three Amazonian species common in the aquarium trade: the freshwater Angelfish (Pterophyllum scalare), Discus (Symphysodon discus) and the Oscar (Astronotus ocellatus). Of the seven opsin genes known in African cichlids, one opsin gene was completely lost in all three Amazonian species. Additionally, other opsin genes were each disabled in at least one species.

Carleton’s team at UMD then determined which genes were turned on to produce opsin proteins in these species. Although the mechanisms of gene loss or altered regulation were slightly different in each species, the researchers found that all three species expressed the same three opsin proteins. This specific array of opsin proteins is particularly well-suited to the red and orange wavelengths of light that dominate Amazon waters.

“South American cichlids are not as diverse as their African relatives. But they are still very colorful, which makes them popular in the aquarium trade,” said Daniel Escobar-Camacho, a biological sciences graduate student at UMD and first author on the study. “I am fascinated to learn more about how they perceive the world.”

Escobar-Camacho and Carleton were both surprised to see all three species lose genes entirely.

“With three different related species, each seemed to lose genes in a different way,” Carleton said. “It wasn’t just one event early on–each species seemed to acquire this sensitivity in a specific way. We’re learning that the genetics of vision is incredibly diverse. Genes seem to come and go much more quickly than I would have expected.”

Escobar-Camacho plans to study vision in another group of South American fish: the Characiformes, which includes the piranha and neon tetra. He would also like to take this cichlid work a step further.

“I’d like to prove that cichlids have color vision. We have shown this from a molecular biology perspective: they have opsin genes and express the pigment proteins,” Escobar-Camacho said. “But I want to take it a step further and prove it behaviorally. I’m working on training fish to distinguish one color from another.”