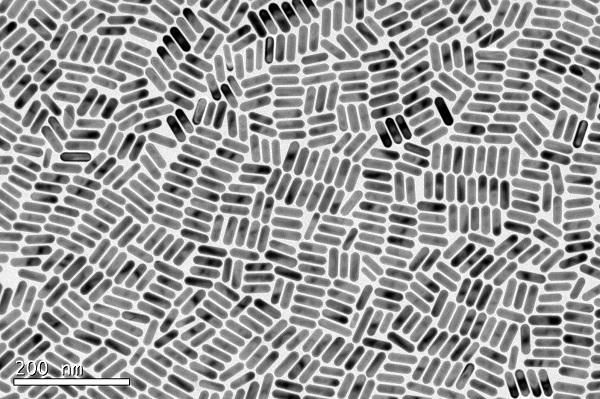 These are ultramonodisperse gold nanorods that behave as clones from an optical point of view. Source: Guillermo González Rubio.

Shaping nanometric gold particles – of the size of millionths of a millimeter – to improve their properties in biomedicine and photonics has been made possible thanks to a special laser system in a work carried out at the Universidad Complutense de Madrid (UCM) and now published in Science.

The research, in which the CIC biomaGUNE and the Universidad Politécnica de Madrid also participate, not only represents a record in optical quality in which billions of gold nanoparticles behave as a single one, but introduces a new way to manipulate and improve nanomaterials by employing lasers as chisels in the hands of a sculptor.

“By using ultrafast lasers, which are very intense but very short in duration (of the order of a billion trillion flashes per second), we have realized a world record in optical quality, where all the obtained shaped particles behave like nano-sized clones”, explains Andrés Guerrero Martínez, researcher of the Ramón y Cajal Program at the Faculty of Chemical Sciences of the UCM.

The study provides the physical and chemical clues required to understand and control such nanomaterials, considered to be “perfect” from an optical point of view.

“We have tried during the last fifteen years to obtain identical nanoparticles, so that they all present the same color and their applications are more efficient. In this work, we have focused on the use of gold nanorods, in which minimal variations in their length or width result in significant changes in the color of the light they absorb”, says Luis Liz Marzán, scientific director of CIC biomaGUNE and researcher at the Ikerbasque Program.

From tumor treatment to pollution remediation

The applications of nanoparticles rely on their ability to absorb and reflect light of a specific color in a surprisingly efficient way. These so-called plasmonic effects result in optical properties that cannot be achieved with metals of larger dimensions, even at the millimeter scale.

These properties can be used for a large number of useful applications that, in many cases, were not possible until now. In medicine, not only the light reflected by these particles can be used to diagnose diseases, but their light absorption properties can also be exploited to induce the release of heat for, for example, the treatment of tumors in a localized way, thus minimizing the usual side effects of current treatments.

“Plasmonic particles have also found applications in areas such as information technology, energy production, or environmental pollution control, among others”, says Guillermo González Rubio, co-author of the paper who has obtained his PhD at the UCM under the supervision of Andrés Guerrero Martínez and Luis Liz Marzán.

Another novelty of this work is the application of ultrafast lasers to shape the geometry of the particles and refine their properties. In this case, Luis Bañares, professor at the UCM and co-author of the article, works at the Ultrafast Laser Center (CLUR) at the UCM.

Furthermore, so as to understand the chemical and physical nature of the shaping process, standard characterization techniques (spectroscopy and electron microscopy) have been employed, as well as new theoretical models and advanced computer simulation techniques.

According to Ovidio Rodríguez Peña, a researcher at the UPM, “the demonstration of this goal and the explanation of the processes that allow it to happen represent a paradigm shift that may open new avenues for the development of nanomaterials with improved properties and applications”.