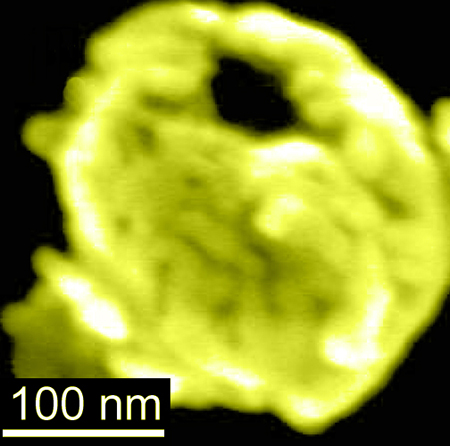 Imagine a device that could transport drugs to any diseased site in the body with the help of a small magnet. Researchers at the University of California San Diego have taken a step toward that goal by developing nano-sized vessels, called nanobowls, that could be filled with drug molecules and controlled with magnets for guided delivery to specific tissues and organs, including cancer tissue, small organs such as the pancreas and hard to access areas like the brain.

“Our goal is to develop drug carriers that we can direct to any part of the body, hold them there until they release their payload, then direct them away—all done using a small magnet,” said Ratneshwar Lal, professor of bioengineering, mechanical engineering and materials science in the Jacobs School of Engineering at UC San Diego.

“More importantly, we want to direct these drug carriers through places in the body where drugs typically can’t pass, like the blood-brain barrier,” Lal said. This would offer a new way to target and treat brain diseases like Alzheimer’s disease and glioblastoma, the most malignant of brain tumors.

In a previous study, Lal and his team have shown that they can magnetically guide nanoparticles safely through the blood-brain barrier in mice.

Now, the team has taken its research a step further by making nanobowls that could be used to store and carry drugs, and potentially be used to detect diseased cells and tissue.

The nanobowls, which are at the proof-of-concept stage, are bowl-shaped silica nanoparticles—smaller than the width of a human hair—coated in a layer of gold, with magnetic iron oxide nanoparticles sandwiched in between the silica and gold layers. In a recent paper published in the journal Nanoscale, researchers showed that the nanobowls could be moved around by a small magnet, are capable of going inside normal and cancerous cells and could be used to detect the presence of low abundance molecules.

Researchers created the nanobowls in a multi-step synthesis. They first made templates of spherical silica nanoparticles with partially exposed polystyrene cores. The silica surface was functionalized, then coated with magnetic iron oxide nanoparticles followed by a layer of gold. The polystyrene cores remained untouched and were washed away with an organic solvent, leaving behind a cavity to create the nanobowl.

Researchers showed they could use a small magnet to move the nanobowls through a hydrogel. “This suggests a potential use of the nanobowls for magnetically controlled delivery through soft tissues,” the researchers reported in the Nanoscale paper.

Because of their gold coating, the nanobowls could be used for imaging. In their experiments, researchers showed that molecules in extremely low concentrations, which are typically impossible to see spectroscopically, were easily detected in the presence of the nanobowls. This feature has applications in detecting disease markers early on, researchers said.

As a next step, Lal and his team plan on making caps for the nanobowls that can be triggered to open on demand to release drugs. “This would enable us to control the release of drug payloads in our system,” Lal said.