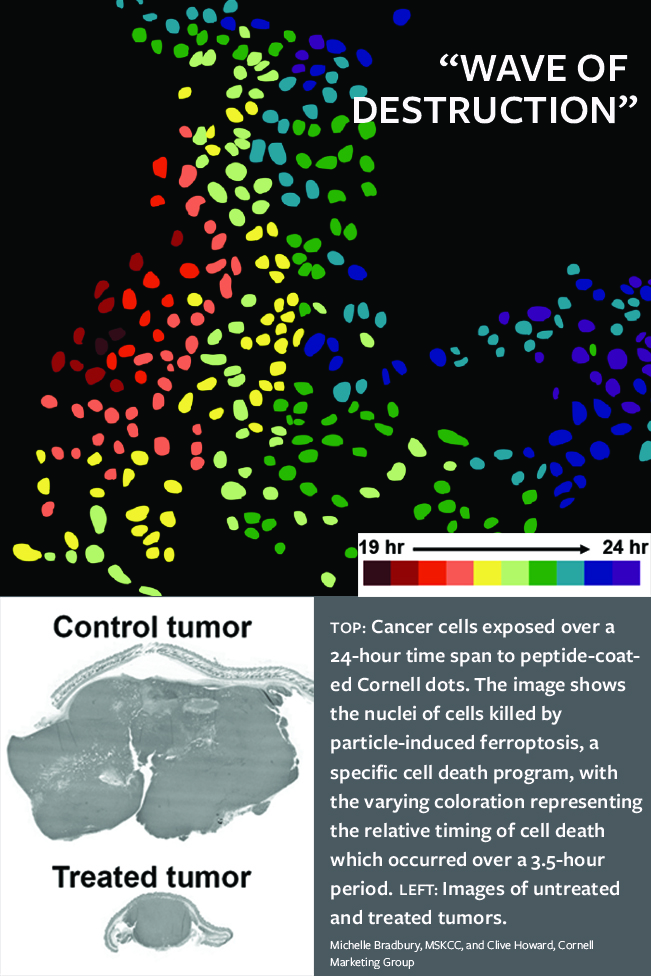 Nanoparticles known as Cornell dots, or C dots, have shown great promise as a therapeutic tool in the detection and treatment of cancer.

Now, the ultrasmall particles – developed more than a dozen years ago by Ulrich Wiesner, the Spencer T. Olin Professor of Engineering – have shown they can do something even better: kill cancer cells without attaching a cytotoxic drug.

A study led by Michelle Bradbury, director of intraoperative imaging at Memorial Sloan Kettering Cancer Center and associate professor of radiology at Weill Cornell Medicine, and Michael Overholtzer, cell biologist at MSKCC, in collaboration with Wiesner has thrown a surprising twist into the decadelong quest to bring C dots out of the lab and into use as a clinical therapy.

Their paper, “Ultrasmall Nanoparticles Induce Ferroptosis of Nutrient-Deprived Cancer Cells and Suppress Tumor Growth,” was published Sept. 26 in Nature Nanotechnology. The work details how C dots, administered in large doses and with the tumors in a state of nutrient deprivation, trigger a type of cell death called ferroptosis.

“If you had to design a nanoparticle for killing cancer, this would be exactly the way you would do it,” Wiesner said. “The particle is well tolerated in normally healthy tissue, but as soon as you have a tumor, and under very specific conditions, these particles become killers.”

“In fact,” Bradbury said, “this is the first time we have shown that the particle has intrinsic therapeutic properties.”

Wiesner’s fluorescent silica particles, as small as 5 nanometers in diameter, were originally designed to be used as diagnostic tools, attaching to cancer cells and lighting up to show a surgeon where the tumor cells are. Potential uses also included drug delivery and environmental sensing. A first-in-human clinical trial by the Food and Drug Administration, led by Bradbury, deemed the particles safe for humans.

In further testing of the particles over the last five years – including the last 13 months as a member of the Centers of Cancer Nanotechnology Excellence, a National Cancer Institute initiative established in August 2015 – Bradbury, Overholtzer, Wiesner and their collaborators made this major, unexpected finding.

When incubated with cancer cells at high doses – and, importantly, with cancer cells in a state of nutrient deprivation – Wiesner’s peptide-coated C dots show the ability to adsorb iron from the environment and deliver this into cancer cells. The peptide, called alpha-MSH, was developed by Thomas Quinn, professor of biochemistry at the University of Missouri.

“The original purpose for studying the dots in cells was to see how well larger concentrations would be tolerated without altering cellular function,” Overholtzer said. “While high concentrations were well-tolerated under normal conditions, we wanted to also know how cancer cells under stress might respond.”

To the group’s surprise, in 24 to 48 hours after the cancer cells were exposed to the dots, there was a “wave of destruction” throughout the entire cell culture, Wiesner said. Tumors also shrank when mice were administered multiple high dose injections without any adverse reactions, said Bradbury, co-director with Wiesner of the MSKCC-Cornell Center for Translation of Cancer Nanomedicines.

In the ongoing fight against a disease that kills millions worldwide annually – cancer has taken several in Wiesner’s family, making this also a personal crusade for him. Having another weapon can only help, Wiesner said.

“We’ve found another tool that people have not thought about at all so far,” he said. “This has changed our way of thinking about nanoparticles and what they could potentially do.”

Future work will focus on utilizing these particles in combination with other standard therapies for a given tumor type, Bradbury said, with the hope of further enhancing efficacy before testing in humans.

Researchers will also look to tailor the particle to target specific cancers. “It’s a matter of designing the particles with different attachments on them, so they’ll bind to the particular cancer we’re after,” Overholtzer added.