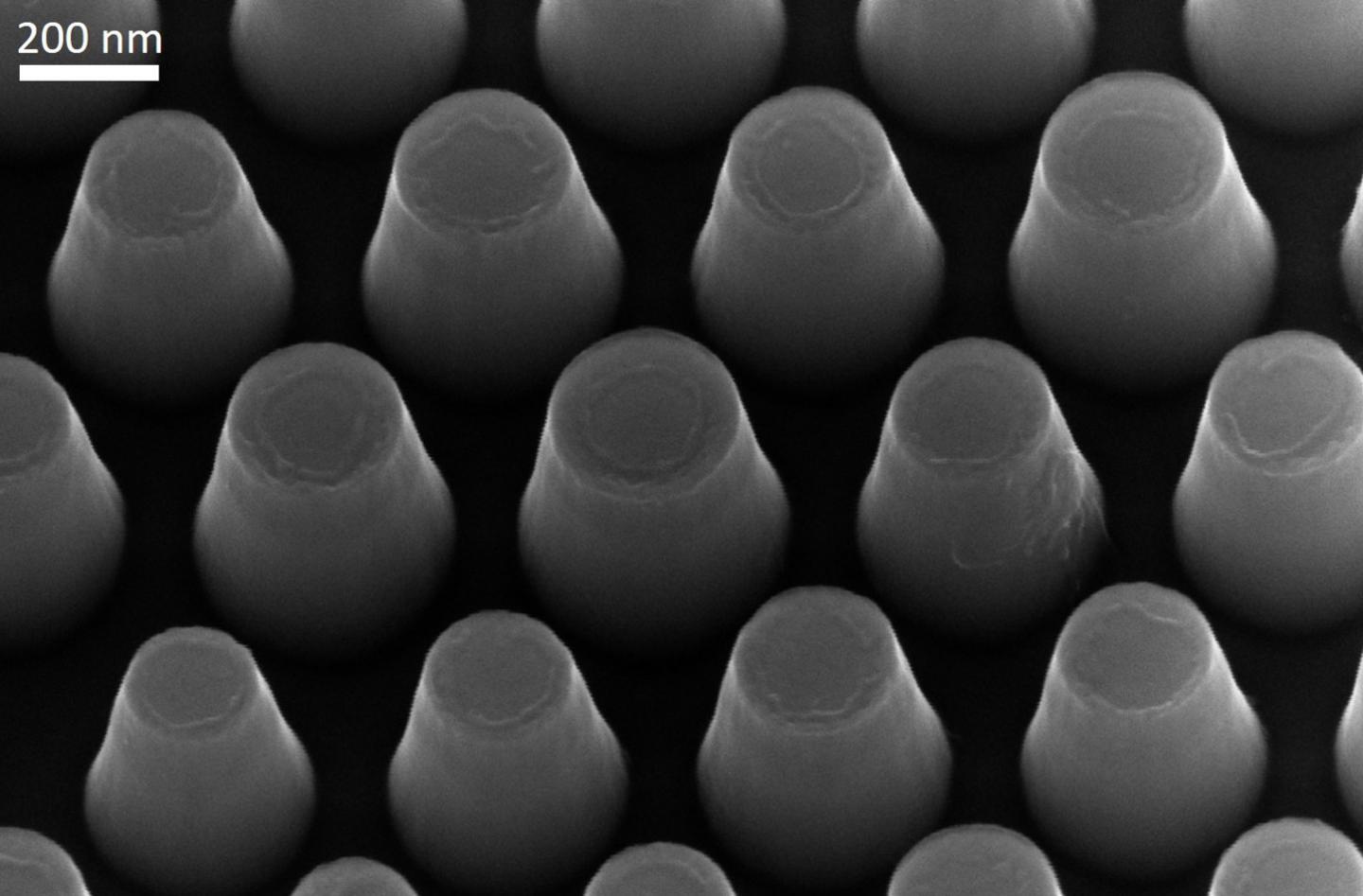 This is a microscope image of the fabricated chimney-shaped nanopillars by researchers from Linköping University and the Royal Institute of Technology, Sweden. Credit: Shula Chen, Creative Commons Attribution 4.0 International License http://creativecommons.org/licenses/by/4.0/

Researchers from Linköping University and the Royal Institute of Technology in Sweden propose a new device concept that can efficiently transfer the information carried by electron spin to light at room temperature – a stepping stone towards future information technology. They present their approach in an article in Nature Communications.

Just as the Earth spins around its own axis, an electron spins around its own axis, either clockwise or counterclockwise. The handedness of the rotation is referred to as spin-up and spin-down states. In spintronics, the two states represent the binary bits of 0 and 1 and thus carry information. The information encoded by these spin states can in principle be converted by a light-emitting device into light, which then carries the information over a long distance through optic fibres. Such transfer of quantum information opens the possibility of future information technology that exploits both electron spin and light, and the interaction between them, a technology known as “opto-spintronics”.

“The main problem is that electrons easily lose their spin orientations when the temperature rises. A key element for future spin-light applications is efficient quantum information transfer at room temperature, but at room temperature the electron spin orientation is nearly randomized. This means that the information encoded in the electron spin is lost or too vague to be reliably converted to its distinct chiral light”, says Weimin Chen at the Department of Physics, Chemistry and Biology, IFM, at Linköping University.

Now, researchers from Linköping University and the Royal Institute of Technology have devised an efficient spin-light interface.

“This interface can not only maintain and even enhance the electron spin signals at room temperature. It can also convert these spin signals to corresponding chiral light signals travelling in a desired direction”, says Weimin Chen.

The key element of the device is extremely small disks of gallium nitrogen arsenide, GaNAs. The disks are only a couple of nanometres high and stacked on top of each other with a thin layer of gallium arsenide (GaAs) between to form chimney-shaped nanopillars. For comparison, the diameter of a human hair is about a thousand times larger than the diameter of the nanopillars.

“An important advantage of the nanopillar design is that light can be guided easily and more efficiently coupled in and out”, says Shula Chen, first author of the article.

The researchers hope that their proposed device will inspire new designs of spin-light interfaces, which hold great promise for future opto-spintronics applications.